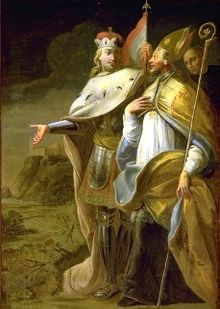 Leopold II , the handsome , also Liutpold (* 1050 ; † October 12, 1095, presumably in Gars am Kamp ) was Margrave of Austria from 1075 to 1095 and a supporter of the Gregorian reforms during the investiture dispute, a supporter of the against Emperor Heinrich IV. († 1106) occurring against kings and protector of Bishop Altmann of Passau , which significantly to the reform of the monasteries and church organization in the Markgrafschaft Austria contributed.

Leopold II came from the dynasty of the margraves of Austria, who ruled the eastern margraves of Bavaria as margraves from 976, who descended from the older Luitpoldingern (dukes of Bavaria between 908 and 989), but - long after their extinction - as " Babenberger " are designated. He was born as the eldest son of Margrave Ernst the Brave of Austria and Adelheid from the House of Wettin (* around 1040, † 1071), a daughter of Dedo II. Margrave of Lusatia and of Thuringia († 1075).

Leopold II succeeded his father Ernst as Margrave of Austria in 1075 - the same year in which, after the Lent Synod, an open conflict in the investiture dispute between King Heinrich IV. From 1053 co-king, from 1056 Roman-German king and from 1084 until his abdication on December 31, 1105 Kaiser . († 1106) and Pope Gregory VII. Gregory VII (Hildebrand von Soana) who ruled from 1073 to 1085 broke out, which was to have a major impact on the life and government of Margrave Leopold II.

Initially, Leopold was on the best of terms with King Henry IV of the Salian family , who made him an important donation in 1076, but was deposed and excommunicated by Pope Gregory VII in the same year. Even after King Heinrich IV went to Canossa in January 1077, Leopold II stayed at his court in 1077.

Soon after, however, there was a rift, since Margrave Leopold II was one of the supporters of the church reform movement and was in close contact with Altmann Bishop of Passau (1065 to 1091), who was a staunch supporter of Pope Gregory VI. was expelled from his episcopal town by King Heinrich in 1078 and found acceptance and support in the margraviate of Austria, which belonged to his diocese and where the diocese had extensive possessions.

The dispute was not limited to bilateral issues, however, but had political consequences, since after the lifting of the ban, many German princes carried out the removal of the king and the election of a successor, which already took place at a meeting of oppositional princes in Forchheim, where Rudolf von Rheinfelden was raised to king on March 15, 1077. Leopold's relationship with King Heinrich suffered a kink at the latest in 1078, when Altmann von Passau, the most determined papal supporter of the German bishops, was driven out of Passau by King Heinrich and went to Austria to see Margrave Leopold.

As a result, Leopold is likely to have renounced King Heinrich, since he invaded the margraviate of Austria with an army in 1079 and forced Leopold II to submit. After counter-king Rudolf von Reinfelden fell in battle against King Heinrich IV in 1080, a new anti-king, Hermann Graf von Salm , was elected in 1081 . Margrave Leopold took his side and used this election as an opportunity to publicly renounce King Heinrich at a meeting in the city of Tulln in the presence of the greats of his country in the summer of 1081, to drive his followers from the march and at the same time the supporters of the Pope and his legate (Bishop Altmann) to promise armed defense. Leopold II did not stop at words, however, but moved to Augsburg together with the opposing king Hermann von Salm .

This second rejection of King Heinrich was not without consequences, because he, who was then in Italy, quickly deposed Margrave Leopold and enfeoffed his loyal partisan Vratislav II (Bohemia) Duke of Bohemia with the Margraviate of Austria. When Vratislav tried to take possession of the Mark at the head of an army, Margrave Leopold opposed him, which led to the battle of Mailberg on May 12, 1082 , in which the Austrians suffered a devastating defeat, from the next Margrave Leopold only a few greats and knights escaped alive. This was followed by devastation of the country in the north of the Mark by the Bohemian soldiers and then a famine, whereby a strip of land north of the Thaya was also lost, which for a long time established the border with Moravia.

Despite the deposition and the military defeat, Margrave Leopold II managed to stay in his margraviate. However, after this setback, he refrained from taking part in activities against Henry IV.

Relations with Duke Vratislav II normalized, because he ultimately received neither Austria nor the Mark Meissen promised to him by Heinrich IV , but was compensated for it by being made King of Bohemia in 1086 for himself . The relationship with Bohemia was consolidated in 1100 through the marriage of Gerberga of Austria - a daughter of Leopold II - with Bořivoj II of Bohemia († 1124) - a son of King Vratislav II.

The presence of Bishop Altmann von Passau had a very positive effect in Austria, as he was very active in putting the most important concerns of the Gregorian reform movement - that is, primarily the fight against the private church system and against the marriage of priests - into practice. For example, he reformed the Kremsmünster monastery in Passau, which had existed since 777, in the spirit of the Junggörz direction, which - unlike the French reform monastery Cluny - did not insist on the abolition of private church law, but limited itself to suppressing the influence of the laity.

Bishop Altmann, of the Augustinian Canons greatly appreciated and Passau to 1067, the Augustinian Monastery of St. Nikola had founded, founded in the years 1070-1083 in the east of his diocese in today's Lower Austria near Krems , the Canons Göttweig as a base of church reform and as a safe haven in the political turmoil of the investiture controversy. The Benedictine monastery of Melk was reformed in a very similar sense in 1089 . After Altmann's death there were crises in these monasteries, with his favorite Göttweig foundation in 1094 abandoning the “Vita canonica” rule introduced by Bishop Altmann and joining the Benedictine order and the Hirsau reform .

In addition, he reformed the Passau monasteries of St. Florian and St. Pölten , which were occupied by secular canons who still lived with private property and in an imperfect community, which Bishop Altmann therefore made regular canons . Also Melk was reformed, many private churches were replaced by him and built churches of stone. Some of the church properties were also given to Margrave Leopold II as thanks for his support, because his son, Margrave Leopold III , who was later canonized , later returned them to their rightful owners. The influence of Bishop Altmann on Leopold II was at times so great that he was called the “ruler” of the margrave.

In Leopold's margraviate there were numerous areas that were beyond his control, as they were directly subordinate to the king or foreign dioceses, monasteries, monasteries or Bavarian nobility. This also included the most important settlement, Tulln on the Danube , which has been a royal estate since the time of the Carolingians and is already known as "civitas" in the 11th century, although this is not to be understood as a city in today's sense. As a royal official, Leopold was able to use such royal places, such as at the aforementioned meeting in 1081, but they were not suitable as permanent residence.

The residence of Margrave Leopold II was also not in Vienna , which later became the capital of Austria, since the area of ​​Vienna was still owned by the Counts of Formbach at that time and only a generation later by his son Leopold III. could be acquired. Like his ancestors, Leopold II resided in the castle of Melk on the Danube , a place that is documented as early as 831 and is mentioned in the Nibelungenlied as "Medelike". The castle, which is centrally located in the Wachau on the Danube , was "acquired" by Margrave Leopold I by driving out the previous owner, Count Sizzo (Sieghard IV), from the Siegharding family. Leopold II later moved his residence to the castle of Gars am Kamp in the course of the expansion of his rule , which was of strategic importance for securing the border against Bohemia. The time of this move is not known, but can be roughly determined by the fact that Margrave Leopold II handed over Melk Castle to the Benedictine order in 1089 . Leopold II died on October 12, 1095, presumably in his residence, Gars am Kamp Castle. Where Leopold was buried is a matter of dispute. A handwritten note from the 12th century about the inauguration of the castle chapel, which was consecrated to Saint Pancratius, mentions a shrine in which the relics of Margrave Leopold are kept, but it is not clear whether it is the coffin Bones or other sanctuaries from the property of the margrave. Alternatively, one could think of the newly founded Melk Abbey in the old residence of his family, since monasteries as burial places for noble families were more obvious than castles. However, an examination of the bones in Melk in 1968 could not find any evidence that Leopold II was also buried there.

Under Leopold II the margraviate of Austria grew more and more into the empire. This through the investiture controversy in which Leopold was involved, which was a step on the way to the formation of the "Land" Austria and to sovereignty over this country, but also through the relationships he established, mainly of a family nature, with clerical and secular greats As with his mother's Saxon relatives, the Gregorian-minded Bavarian noble families , such as the Formbach-Ratelnbergers and the Traungauers , who owned substantial property in the Mark, but also with the Guelphs and the Counts of Dießen-Wolfratshausen . These relationships were further strengthened by the marriage policy when his children were married. Leopold's contemporary Berthold von St. Blasien described him as "Liudolfus ditissimus marchio de Orientali Regno in causa sancti Petri fidelissimus contra scismaticos" (for example: Liudolf, very rich margrave of the eastern domain, the most loyal in the matter of St. Peter against the schismatics ) Leopold thus paved the way on which his son Margrave Leopold III. could progress further.

Leopold II was married to Ida , whose origin is not certain, but who probably came from the house of the Counts of Formbach ( district of Passau ) who were loyal to the Pope . Before her marriage to Leopold II, she was probably married to Haderich von Schwarzenburg from the Schwarzenburg family in Upper Palatinate . In 1101 she joined the dukes Welf IV of Bavaria († 1101) and Wilhelm IX. (Aquitaine) William IX. of Aquitaine († 1126) and participated as one of the first crusaders known by name, together with Archbishop Thiemo of Salzburg - who also comes from the dynasty of the Counts of Formbach - in the crusade of 1101 , on which she died.