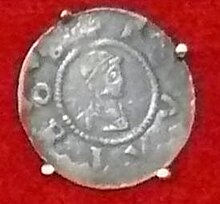 Tumba by Bořivoj in St. Vitus Cathedral in Prague

In 1081 the son of Vratislav II and Swatawa of Poland went to Italy as leader of the armed army with King Henry IV , where he successfully took part in the conquest of Rome two years later . He returned in 1084 with a handful of fellow combatants. The attempt of Břetislav II to enforce Bořivoj as his successor prevented the seniority principle . According to this law, Oldřich was to become the heir to the throne, the son of Conrad I.

Bořivoj turned to the emperor and asked for support. The inclusion of Bohemia in the Imperial fief in 1099 1101 Bořivoj was then determined for Duke. This approach had consequences throughout the 12th century , in which the emperors intervened several times in the fortunes of Bohemia and the succession plan. Oldřich returned to Brno and prepared himself to fight for the throne. He also turned to the emperor, who then accepted Brno into his fiefdom, but did not want to support the struggle for the throne.

Oldřich gathered around him some Austrian mercenaries and moved to Malín near Kutná Hora , in the hope that Bohemian troops would join him. However, this did not happen and he returned to Brno in 1101.

In 1105 there were disputes over the imperial throne. The German dukes wanted to overthrow with the help of the imperial son Heinrich IV . Bořivoj and also Leopold III. , Margrave of Austria , to whose sister Bořivoj was married, initially stood on the side of the emperor, who was then deposed and fled via Bohemia to the Rhineland , where he died in Liège in 1106.

In 1105 Svatopluk , Duke of Olomouc, tried to overthrow Bořivoj. He moved to Prague, but initially had no success. By bribing the estates he tried to intrigue against the duke. Two years later the coup was successful and Bořivoj had to leave the country. He turned to the emperor, who called Svatopluk over. Svatopluk handed over the rule to his brother Otto the black and went to the emperor. There he was captured. Bořivoj wanted to regain the throne in 1110 with the help of his nephew Wiprecht II, son of Wiprecht von Groitzsch , but was intercepted at the border. Svatopluk promised obedience to the emperor, after which he was released from prison. Bořivoj went to Poland to the Duke Bolesław III. Crooked mouth .

In 1117 Bořivoj was unexpectedly named duke at the behest of Vladislav I. The first three years of his rule were marked by natural disasters (floods, storms). There were also difficulties in armed conflicts with the Hungarians , which he had been waging since 1116. In 1120 he was dethroned.

Bořivoj married Gerberga von Babenberg, daughter of Margrave Leopold II of Austria on October 18, 1100 and fathered the children Jaromír, Spytihněv, Lupold , Albrecht and Richeza with her .

He fathered numerous children. However, none of his sons became duke, on the contrary - they mostly took on subordinate tasks. This branch of the Premyslids soon died out. Bořivoj's remains were buried in St. Vitus Cathedral in 1124 .