The Přemyslids or Przemyslids ( Czech Přemyslovci ) were a Bohemian ( Czech ) ruling family. They were in power in Bohemia from the end of the 9th century until 1306, with interruptions around 1000. At first they only ruled in parts of Bohemia. There is no historical evidence of an earlier rule. 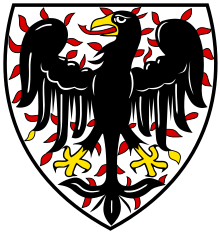 The Přemyslids ruled as dukes of Bohemia from the end of the 9th century . The first king of Bohemia became Vladislav II in 1158 , with Ottokar I the kingship became hereditary in 1198. In 1212 the lands of the Bohemian Crown were elevated to a kingdom within the Holy Roman Empire . From this time the dynastic succession to the throne was established. The Přemyslids' sphere of influence included or was added later:

Until the 10th century

According to the explanations in the Chronica Boemorum des Cosmas of Prague , the Přemyslids are descendants of the legendary progenitor Přemysl the Ploughman , a married tribal leader, and his wife Libussa . Cosmas also passed down the names of other pre-Christian Přemyslids : Nezamysl, Mnata, Vojen, Vnislav, Křesomysl, Neklan and Hostivít. The list, handed down only by Cosmas, points to an older family tradition. Whether some of the eight rulers' names correspond to historical personalities cannot be conclusively concluded from them.

In the 9th century the Přemyslids were among the Bohemian local rulers ( knes , Latin dux , duces ). Its seat was the Central Bohemian Fortress Levý Hradec . Towards the end of the 9th century, they moved their headquarters to the newly founded Prague Castle and subsequently gained authority over the local princes of the Vltava Valley. Between 882 and 885, the first historically documented Přemyslid Bořivoj I was baptized with his wife Ludmilla in the neighboring Moravian Empire of Method .

After Bořivoj's death around 889, Bohemia was temporarily annexed to Greater Moravia until 894 under Prince Svatopluk I from the Mojmiriden dynasty .

After Sventopluk's death, Bořivoj's son Spytihněv I took over from 894 to 915 and kept his distance from the Great Moravian Empire. In 895 he had to swear allegiance to the Emperor Arnulf of Carinthia .

After his death, his brother Vratislav I continued the policy of Bořivoj from 915 to 921.

Wenceslaus , son of Vratislav I , ruled since 921. He was murdered in 929 or 935 by his brother Boleslav I and his followers.

Since Wenceslas had been venerated as a saint since the 2nd half of the 10th century and was made a national patron as early as the 11th century, all the princes of Bohemia were then considered to be Wenceslas' earthly deputies. The Bohemian royal crown made for the coronation of Charles IV in the 14th century was also known as the Wenceslas Crown .

The reign of Boleslav I (929 or 935–972) marked the establishment of a unified central Bohemian state,

Bohemia in the 10th century

After 955 at the latest, the Přemyslids ruled the area around Prague and western Bohemia as well as Moravia, areas of Silesia and Lesser Poland far beyond Krakow , as the Jewish envoy Ibrahim ibn Jaqub to his caliph Abd ar-Rahman III. 965 reported, and possibly a small part of Slovakia as well . This did not include the entire East Bohemian area belonging to the Slavnikid princes .

Under Boleslav II (972–999), the diocese of Prague was founded in 973. In a border description of the diocese of Prague from the year 1086 (which obviously reflects the conditions of the foundation) in addition to Bohemia and Moravia also Silesia, the Krakow Castle "with associated regions" to the Western Bug and Strypa as well as the "provincia Wag", ie an area around the Waag indicated as belonging.

Silesia, Lesser Poland and Moravia were lost to the Polish ruler Mieszko I from 990 onwards .

In 995, Boleslav had the Slavnikid ruling class murdered by his followers, the Vršovci , in Libice , thus completing the unification of Bohemia.

Tensions against Poland have intensified since 999. During the struggle for the throne between Boleslav's sons and Bolesław I. Chrobry . In 1003/4 Prague was Polish. This was followed by interventions of the Holy Roman Empire .

In 1019 Oldřich ( Udalrich ) ended the Polish occupation of Moravia, which was thus permanently attached to Bohemia.

Udalrichs son Břetislav I successfully waged war against Poland and was after military conflicts with King Henry III. Ally of the Holy Roman Empire against Hungary. Břetislav regulated his successor in 1055 through the seniority order, according to which the oldest Přemyslid should exercise the rule. While his eldest sons Spytihněv II. And Vratislav II. Ruled successively and Jaromír-Gebehard became Bishop of Prague, the younger sons ruled as partial princes in Moravia: Conrad I received Brno and Znojmo , Otto I and his successors ruled in Olomouc ; Nevertheless, they did not lose their claims to the Prague throne.

1085-1086 the Roman-German King Heinrich IV raised Vratislav II as a reward for his help against the Saxons as king (not yet hereditary). His successors, Konrad I of Brno and Břetislav II, had to be content with the title of duke.

Since the 12th century

In 1099 Břetislav II achieved the recognition of his half-brother Bořivoj II (1101–1107 and 1117–1120) as his successor, which was the first time he violated the Seniorate Act. Attempts to replace the seniorate with the primogeniture exacerbated the battles for the throne at the beginning and end of the 12th century. The opposition of the two main Prague lines, which descended from the brothers Vladislav I (1109–1117 and 1120–1125) and Soběslav I (1125–1140), had serious consequences. The disputes between the branch of Vladislav I ( Vladislav II , Friedrich , Vladislav Heinrich , Ottokar I Přemysl ) and the branch of Soběslav I ( Soběslav II , Wenceslaus I) intensified through interventions by the Moravian Přemyslids ( Ulrich von Brno , Konrad II of Znojmo , Konrad III Otto von Znojmo) and other heirs to the throne ( Děpold , Heinrich Břetislav III and others). The Přemyslids, who did not come from Prague, also became rulers of Prague several times ( Svatopluk von Olmütz 1107–1109, Konrad III. Otto 1189–1191, Heinrich Břetislav III. 1193–1197), but their efforts met with stubborn resistance from the Prague court. In addition, the Roman-German Empire interfered in the throne disputes, with Lothar von Supplinburg in particular suffering a crushing defeat against Duke Soběslav I in the battle of Chlumec in 1126 and was taken prisoner. Vladislav II. (1140–1172) received the title of king in 1158, but this did not pass to his successors (compare Vratislav II.). In the 12th century the Přemyslid marriages with the Polish Piasts , the Hungarian Árpáds , the Wettins and Babenbergers , but also with the families of the Bavarian Counts von Bogen , von Berg and the Wittelsbachers .

With Duke Wenceslaus II († around 1192) the branch of Soběslav I died out, and around 1200 most of the Moravian Přemyslids died out. Their last representative was Siffrid († 1227, canon in Olomouc). The Duke Ottokar I Přemysl (1192–1193 and 1197–1230) from the other branch, however, received the title of King of Bohemia from the Roman-German Empire in 1198. Thanks to his skillful policy towards Philip of Swabia , Otto IV and Friedrich II , this was finally awarded to him and his successors, including all the privileges they had acquired, by the Golden Bull of Friedrich II in 1212. After the death of his childless brother Vladislav Heinrich († 1222), Margrave of Moravia, and after the expulsion of the Theobalde (around 1223), who later died out in exile, the descendants of Ottokar I Přemysl were the only representatives of the Přemyslids, so that in 1216 Ottokar I Přemysl had his son Wenceslaus I crowned in 1228.

Under Wenceslas I (1230–1253), who was married to Kunigunde of Swabia , the daughter of Philip of Swabia , the expansion policy of the Přemyslids began. This reached its climax under Ottokar II. Přemysl (1253–1278), whose marriage to Margarethe von Babenberg enabled the acquisition of Austria; later Styria , Egerland , Carinthia and Carniola also joined. Přemysl had to deal with a strong aristocratic opposition in Bohemia, Austria and the Alpine countries. In the fight against Rudolf von Habsburg he was first defeated in 1276 and killed in the Battle of Dürnkrut in 1278 . Wenceslaus II (1278 / 1283–1305), the son of Ottokar II, used the chaos that had arisen as a result of the fighting of the aristocratic opposition in Bohemia to consolidate the central power again. From 1278 to 1283 ruled for the not yet adult Wenzel Otto von Brandenburg in Bohemia and Rudolf von Habsburg in Moravia. In 1300 Wenceslas won the Polish crown for a short time and in 1301 the Hungarian crown (which, however, was for his son Wenceslaus III ). But the discontent of the Polish and Hungarian nobility and the hostility of the Roman-German king caused the early loss of both crowns: Wenceslas son Wenceslaus III. (1305-1306) had to leave Hungary in 1304, as he was only supported in western Hungary by the Counts of Güssing from the Héder family and in today's Slovakia by Matthäus Csák (Matúš Čák). After the unexpected death of his father in 1305, he became King of Bohemia. On August 4, 1306, however, he was murdered on a campaign against Poland in Olomouc. One could not agree on one of the many Premyslid relatives as successors. Heinrich von Leipa would have been predestined for this , whose descendant Hynek Ptáček von Pirkstein was only elected King of Bohemia more than 100 years later, but was not recognized as a Hussite leader by either the House of Habsburg or the Pope. It was only his father-in-law, Georg von Podiebrad , who was enthroned as Bohemian King in 1456.

The marriage of Wenceslas II's daughter Elisabeth to John of Luxembourg in 1310 was the basis for the accession of the Luxembourgers to the throne in Bohemia and Moravia.

Opava branch of the Přemyslids

The Troppauer přemyslidische Duke line was established in 1269 as Ottokar II. Přemysl his natural son of Nicholas I , the province Opava zuwies under its eponymous son Nicholas II. In 1318 to the independent Duchy of Opava was charged. In 1337 he obtained from the Bohemian King John of Luxembourg the duchy of Ratibor, which was piastic until 1336, as a fiefdom. After the death of Duke Nikolaus II. In 1365, the youngest son Přemysl I continued the direct line of the Troppau line, which died out around 1485 with Duke Johann II of Leobschütz . The eldest son Johann I founded the family line Troppau-Ratibor as the sole heir of the Duchy of Ratibor, which ended in 1521 in the male line with Duke Valentin .

Commons : The House of the Přemyslids  - collection of pictures, videos and audio files