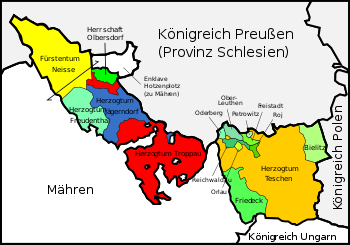 Duchy of Upper and Lower Silesia: the crowned Silesian eagle on the shield covered with oak leaves , above the ducal hat ( Ströhl , 1890)

Austrian Silesia , the official name of the Duchy of Upper and Lower Silesia , was an incorporated part of the lands of the Bohemian Crown and thus the Habsburg Monarchy . Austria remained after the partition of Silesia , the majority of which fell to Prussia as a result of the First Silesian War against Maria Theresa in 1742 . From 1850 to 1918 it was the crown land of the Austrian Empire or, after the Austro-Hungarian Compromise of 1867, the Austrian half of Austria-Hungary . In 1918 Austrian Silesia was largely part of the newly founded Czechoslovakia . A smaller part was awarded to Poland .

The landscape is characterized by the mountain ranges Gesenke ( Altvater , 1490 m) and Beskids (Lysá hora, Kahlberg , 1320 m), the Oder and its tributary Oppa are the most important rivers. The area of ​​the former Austrian Silesia is now mostly in the northeast of the Czech Republic , only the easternmost part between the cities of Teschen (an der Olsa) and Bielitz belongs to the Polish Silesian Voivodeship .

It was divided into a western and an eastern ( Cieszyn Silesia ) part, separated by the northern part of the Moravian District Authority Mistek . The northern and western neighbors were the Prussian province of Silesia , the eastern part of the country bordered on Galicia and Hungary . The area was 5,147 km². The administrative center of Austrian Silesia was the city of Opava .

The numerous German place names in Austrian Silesia show that most of the cities and villages were founded by German settlers . This process began with the Piast Duke Heinrich I , who recruited miners, craftsmen, farmers and traders from Franconian, Thuringian and Upper Saxony areas at the beginning of the 13th century. Most of the cities were granted the Magdeburg city charter.

Until the second half of the 13th century, the area around Opava formed the northern province of the Margraviate of Moravia , after which the Bohemian duchies of Opava , Jägerndorf and Leobschütz emerged under King Ottokar II and his descendants , and from 1320 they were counted among the Upper Silesian duchies.

From 1526, the Habsburgs, in their capacity as kings of Bohemia, took control of the duchies in Silesia . The Jewish population remained small, only 119 families allowed the family laws in 1726 ; Nevertheless, in 1738 Charles VI ordered. the expulsion of all Jews from Silesia, which was carried out only sporadically.

After Prussia's victory over Austria in the First Silesian War in 1742, most of Silesia became Prussian due to the preliminary peace of Breslau , only the Duchy of Teschen and the southern parts of the Duchies of Jägerndorf and Opava and the southern part of the Duchy of Neisse remained with Bohemia and became a Duchy Silesia raised; all important decisions were made at the imperial court in Vienna .

In 1783 Austrian Silesia with the Teschner District and the Troppauer District were incorporated into the Moravian-Silesian Provincial Government in Brno .

As a result of the March Revolution in 1848, a parliament was created with the Silesian Convention . With the imperial constitution of the Austrian Empire of 1849, the duchy received the status of a crown land . However, there was little scope for independent decisions, since the initial federalism soon became centralized . k. Governments in Vienna followed: Industrial and supraregional traders and traders demanded uniform rules from the state for as large an area as possible.

With the Imperial Constitution of 1861 , Austrian Silesia, like the other Crown Lands, received a state order, according to which the Silesian Landtag (its laws were published in the Law and Ordinance Gazette for the Duchy of Upper and Lower Silesia ) and a provincial committee as its executive committee were formed were. The chairman of the state parliament and state committee, appointed by the emperor from among the members, was called the state governor. The governor faced these autonomous state organs as a representative of the emperor and the central government. In Silesia the governor (as in only four other crown lands) bore the title of state president and his office was called the state government. In the Austro-Hungarian Dual Monarchy formed in 1867 , Silesia was part of Cisleithania , the Austrian half of the empire. It sent or later elected members of the Reichsrat in Vienna.

An important family in the region was the noble family Widmann-Sedlnitzky , who held a hereditary seat in the manor house , the upper house of the Austrian Imperial Council .

Part of Czechoslovakia or Poland

After the collapse of Austria-Hungary at the end of the First World War , German-populated areas could not come to German Austria (and with it, as planned, join the German republic). In the law and regulation gazette of the duchy from November 22nd to December 3rd, 1918, resolutions passed by the state government for the Sudetenland , which met in Troppau, were published. The definitive establishment of the Sudetenland province , which would have included the German-populated parts of Austrian Silesia, was prevented by Czechoslovak troops at the turn of the year 1918/19 by occupying the area. The country was annexed to Czechoslovakia ; the eastern part of the country around Bielitz came to Poland and formed the basis of the Silesian Voivodeship there .

The Czechoslovak part remained an independent administrative unit (země Slezsko) until 1928, then it was united with Moravia to form the country of Moravia-Silesia (země Moravskoslezská).

As a result of the Munich Agreement , the Czech region of Silesia was mainly annexed to the German Reich and from 1939 to 1945 belonged to the Troppau administrative district of the Reichsgau Sudetenland . A small strip along the previous Polish border came to Poland as the Olsa area and was included in the Silesian Voivodeship (see above), annexed by the German Reich in 1939 until the Czech-Polish border, which existed until 1938, was re-established in 1945. The non-annexed Czech part in the area of Schlesisch Ostrau and Friedeck belonged to the Protectorate of Bohemia and Moravia from 1939 . From May 1945 the entire area was again part of Czechoslovakia, from summer 1945 the Germans were expelled ( expulsion of the Germans from Czechoslovakia , Beneš decrees ).

The most important industrial sectors included mining ( hard coal , lignite , iron ore ), smelting, metalworking and mechanical engineering as well as the textile industry . In addition, agriculture and animal husbandry were practiced . Since the export of goods was very intensive, the country had a dense transport network. The most important railway line was the Kaiser-Ferdinands-Nordbahn Vienna – Krakow, which ran on the eastern border of the western part of the country and opened up all the larger towns with numerous branch lines.