Historical parts of the Czech Republic:

Silesia (also Czech Silesia , Moravian Silesia or Sudeten Silesia , Czech Slezsko , today also: České Slezsko ) is an area in the north-east of the Czech Republic , which includes a large part of historical Austrian Silesia . Along with Bohemia and Moravia, it was one of the three countries of the Bohemian Crown . The Silesian coat of arms eagle therefore forms one of the four fields of the large coat of arms of the Czech Republic. Today the area is administratively part of the Moravskoslezský kraj and Olomoucký kraj regions .

Most of the area lies in the Sudetes , which merge into the Carpathian Mountains ( Beskids ) in the east . The most important rivers are the Oder (Odra) and the Oppa (Opava), which temporarily formed the border with Prussian Silesia . In addition to Ostrava (whose main part historically belongs to Moravia), the most important cities are the historic capital Opava (Troppau), Bruntál (Freudenthal), Krnov (Jägerndorf), Karviná (Karwin), Bohumín (Oderberg), the newly built city Havířov after 1945 and Český Těšín , the part of Teschen (Cieszyn) that is on Czech territory . 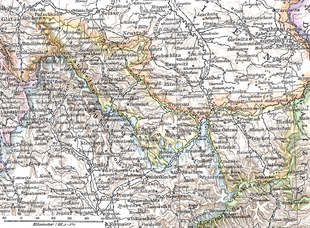 Outlined in yellow:
the two parts of Austrian Silesia 1880

Coat of arms of Silesia

After the First Silesian War in 1742, a small stretch of land ( Duchy of Teschen and the southern parts of the Duchies of Jägerndorf and Troppau and the Principality of Neisse ) remained with Austria , which also included part of the Duchy of Jägerndorf, to which the Prussian inheritance claims were directed, among other things. It was designated as the Duchy of Upper and Lower Silesia , and Troppau was made the capital. This Austrian Silesia consisted of two parts, between which at Ostrau the Moravian area extended to the Prussian border.

In 1910, 43.9% of the inhabitants of Austrian Silesia spoke German , 31.7% Polish (mainly in the eastern part of the country - Cieszyn Silesia ) and 24.3% Czech (mainly around Troppau in the western part of the country, and west of Cieszyn ) as their colloquial language on. After the First World War and the break-up of Austria-Hungary in 1918, the area was claimed by two of the successor states at the same time. The new state of German Austria united it with northern Moravia to form the province of Sudetenland . In Czechoslovakia , whose claim was confirmed in the Treaty of Saint-Germain , it formed the country of Silesia (země Slezsko). In 1920, as a result of the Versailles Treaty with the so-called - mostly Czech-speaking - Hultschiner Ländchen , part of Prussian Upper Silesia came to Czechoslovakia. The Czechoslovakia and Poland claimed in full - mostly Polish-speaking - Cieszyn Silesia was divided between the two states on the Olsa River for strategic reasons. This created the Olsa area .

Administratively, the (Czechoslovak) country of Silesia was combined with Moravia on December 1, 1928 to form the country of Moravia-Silesia ( země Moravskoslezská ). Moravia-Silesia then (until 1948) formed one of the four countries on the territory of Czechoslovakia alongside Bohemia , Slovakia and Carpathian Russia.

After the Munich Agreement of 1938, it fell to the German Reich , together with other predominantly German-speaking areas of Czechoslovakia , it was combined with the North Bohemian and North Moravian as Reichsgau Sudetenland , while the Hultschiner Ländchen was re-assigned to the Prussian district of Ratibor . The Olsa area was completely occupied by Poland and incorporated into its national territory. A year later it was occupied by the German Wehrmacht and administratively incorporated into the Province of Silesia (from 1941 Province of Upper Silesia ). A narrow strip of land of Czech-speaking communities on the right bank of the Ostrawitza initially remained with the shrunken Czechoslovak state and after its occupation by the German Reich in March 1939 became part of the Reich Protectorate of Bohemia and Moravia .

Since the end of Czechoslovakia in 1993, the area has belonged to the Czech Republic, in which it forms one of the three traditional parts of the country ( země , corresponding to the crown lands of the monarchy), which, although appearing in the large version of the Czech coat of arms , are divided up with today's administrative division of the Republic, however, do not cover, so that they are only of historical significance. Today the more structurally stronger and much larger eastern part of the historical Silesian areas belongs to the Moravskoslezský kraj , while the structurally weak Okres Jeseník (Freiwaldau) in the western border area to Glatz and Neisse now belongs to the Olomoucký kraj . The Freiwaldau district consists almost entirely of the towns and villages that formerly belonged to the Principality of Neisse of the Archbishop of Breslau and is thus the small part of Lower Silesia that remained with Austria in 1742.

The population in Silesia spoke varieties of mountain Silesian , but also the Lachish dialects of Czech and, about east of today's urban area of ​​Ostrava, Polish. Even after the Munich Agreement, the Germans and Czechs were expelled from the Teschner Land ( Olsa area ), which had been ceded to Poland , insofar as they had no right of home there or displeased the new Polish administration. After the Second World War, the German population was expelled due to the Beneš decrees .