The new town hall in Ostrava

Ostrava ( pronunciation ? / I ) ( German Ostrau or Mährisch-Ostrau ) is the third largest city in the Czech Republic in terms of population and area . It is the administrative center of the Moravian-Silesian Region . The city is located on the northeastern border of the Czech Republic on the Oder , ten kilometers southwest of the border with Poland and 50 kilometers north-northwest of the border with Slovakia .

Ostrava is located in the far northeast of Moravia in the east of the Czech Republic between the Sudetes and Beskids at the northern exit of the Moravian Gate , on the historical border between Moravia and Silesia , in the historical and cultural landscape of Lachei . Here, at the foot of the Silesian-Ostrava Castle, is the mouth of the Lučina River into the Ostrawitza (Ostravice) , which in turn - like the Oppa (Opava) and Porubka - flows into the Oder .

Ostrava emerged from old settlements at the mouth of the Ostrawitza in the Oder. Here an amber road ran through the Moravian Gate. The Ostrava Basin has been known as the settlement area of ​​the Slavic Golensizen tribe (Czech Holasici ) since the 10th century . Before it was first Celtic, then Germanic settlements.

For centuries, the Oder and Ostravice formed the border between Moravia and Silesia. At the confluence of the Ostravice with the Oder, two villages with the name Ostrava and Ostrawa arose on both sides of the tributary. Polska Ostrawa (Czech: Polská Ostrava / German: Polish Ostrau ) was first mentioned in 1229 in the castellany of Teschen . Moravská Ostrava ( Moravian Ostrau ), first mentioned in 1267, received city rights before 1279. In the second half of the 13th century a border castle of the Piast Dukes of Opole was built in Polská Ostrava , most likely the seat of the castellan named Herman in the Duchy of Teschen, mentioned as a witness in the border treaty from 1297 . During the Middle Ages, many Germans immigrated to the city, while in 1380 the Silesian village was differentiated as Wendish .

The importance of both places remained low until the 18th century. The economic importance and population growth changed rapidly with the intensive mining of the coal seams from 1763. In 1794, 1,578 inhabitants lived in Moravian-Ostrava, 6,881 in 1869.

The Witkowitzer Eisenwerke were founded in 1829 by the Prince Archbishop of Olomouc, Archduke Cardinal Rudolf of Austria. This is where the Habsburg monarchy's first puddling plant was built, and the first coke oven in ancient Austria was also located here. His successor, Prince Archbishop Ferdinand Maria Graf Chotek, leased the company in 1833 to a consortium in which the House of Rothschild already held an important position. In 1843, the Rothschild SM bank became the sole owner. The most important product was initially railroad tracks for the Northern Railway (Vienna – Krakow). Austria's first steam hammer was built in 1844. Ostrava subsequently became a very important center of the steel industry .

The Witkowitz iron works are now an event location

The population recorded by the census rose constantly: 13,448 (1880), 19,240 (1890), 30,116 (1900) and 36,754 (1910). A similar increase can be recorded for the entire region (i.e. including the surrounding area): from 18,711 (1843) to 186,613 (1910). This growth rate of the population could only be achieved through immigration, which came not only from Moravia, but also from Galicia in particular , which was made easier by the common state belonging to Austria-Hungary . The massive immigration of former rural populations into an increasingly industrialized economic region brought with it major social and socio-cultural problems.

One of the larger employers around 1900 was the Centralheizungswerke , headquartered in Hanover .

Until 1918, Mährisch Ostrau belonged to the margraviate of Moravia and Polish Ostrau to the Duchy of Silesia (Austrian Silesia) , most recently both as crown lands . From 1918 both cities were part of the Czechoslovak Republic until 1939 . Since 1919 the eastern city was called Slezská Ostrava (Silesian Ostrava) . On January 1, 1924, the towns of Mariánské Hory (Marienberg) , Přívoz (Oderfurt) and Vítkovice (Witkowitz) with another three municipalities (Hrabůvka (Klein Grabau) , Nová Ves (Neudorf) and Zábřeh nad Odrou (Heinrichsdorf) ) became Moravská Ostrava incorporated.

From 1945 the German part of the population of the city was expelled . 231 Germans were killed in a massacre in the so-called Hanke camp in Ostrau. Many new citizens from South Moravia, Slovakia, so-called repatriates and Roma settled in the following period.

After the collapse of Comecon , heavy industry and the chemical industry, which were operated with considerable damage to the environment, fell into a crisis. The coal mining was stopped on June 30, 1994 with the last funded hunt in Přívoz. In Vítkovice, the blast furnaces went out on September 27, 1998.

Sister cities of Ostrava are:

The area between Ostrava and Karviná is a large industrial area. The environment has been heavily influenced and affected by the concentration of heavy industry - coal mining, smelting works, heavy machinery, coking plants , power plants, gas works, chemical companies. In addition to Ostrava, the center of this industrial region, there are other industrial cities - Karviná, Orlová , Bohumín - with steel and wire mills and other small towns whose employment opportunities depend on these industrial centers. The surrounding areas connect to this core of the region: the Hultschiner Ländchen , the areas around Frýdek-Místek (Friedek-Mistek), Nový Jičín (Neu Titschein) and Třinec (Trzynietz).

Around 150,000 workers were employed in the coal mines in the region in the 1980s. Following the privatization of the mines, there was a threat of closure at the end of 2014. In May 2016, the New World Resources coal miner OKD (Ostravsko-karvinské doly) filed for bankruptcy. With the closure of the Passov mine on March 31, 2017, coal mining in the Ostrava part of the Ostrava-Karviná mining district also ended. Nevertheless, the restructuring of OKD is being worked on in order to maintain coal production in the region in some places (as of August 2017).

The structural change is overall better than in other former centers of European heavy industry. Not least thanks to the good qualifications of the industrial workers, foreign industrial companies were able to settle here. At 4.5% at the end of June 2017, unemployment was slightly above the (low) national average.

Ostrava was considered one of the dirtiest cities in the EU . The emission of fine dust rose in the 1980s to 80,000 tons per year. The main cause for this was and is v. a. the steelworks Nová huť , which is located directly on the outskirts. In neighboring Poland, the limit values ​​for fine dust had to be adapted to EU standards, in the Czech Republic the limit values ​​were three times lower than in Poland. The city administration launched several programs to protect the environment. All coal stoves in private apartments should be replaced by 2010. Fine dust emissions decreased to 1,500 tons in 2016, around 2% of the extremely high amount in the 1980s.

The tram in Ostrava

Ostrava has a well-developed local transport network: there are trams, trolleybuses and city buses. They have had a uniform appearance since the 1990s: They are painted in blue, yellow and white.

The Ostrava tram runs on a 62.7 km network with 15 lines and two night lines. The O bus -Netz is 33.6 km long. The total length of the routes traveled by the buses is more than 350 km.

In 2016, the tram counted 44.4 million passengers. There were 7.0 million ferry passengers on the trolleybus network, the buses carried 18.7 million people.

Ostrava- Přívoz is a railway junction with a marshalling yard . It is located on the former Kaiser-Ferdinand-Nordbahn from Vienna to Katowice and Krakow .

The main train station (Ostrava hlavní nádraží) is located near the city center, but already in the Přívoz district . In it, the Ostrava – Frýdlant nad Ostravicí railway branches off from the main Vienna – Kraków line. However, the Ostrava-Svinov train station to the west outside the city center and expanded by 2006 is of great regional importance. It is also on the Vienna – Kraków route and is the start of several other routes.

Ostrava is the center of the Esko v Moravskoslezském kraji network , a S-Bahn- like system of suburban trains.

The Leoš Janáček Airport Ostrava in Mošnov is a regional airport with scheduled connections to Warsaw as well as tourist charter flights to Hurghada and Sharm El Sheikh .

Audimax of the TU Ostrava

Ostrava is a nationally important center for trade, science and art and is home to nationally known institutions and events.

The Technical University of Ostrava (TUO) was founded in 1849 as of Mining educational institution founded in 1865 for Mining Academy and in 1904 to the University of Technology collected. The former VŠB TU Ostrava University of Applied Sciences is now an important engineering university in the Czech Republic with around 15,000 students, especially in modern mining, metallurgy and engineering as well as in environmental and nanotechnology.

The beginnings of the University of Ostrava (OSU), founded in 1991, can be found in the Upper Pedagogical School in Opava , established in 1953 . In addition to educational, natural and human sciences courses, a medical faculty with a university hospital is affiliated.

The Moravian-Silesian Research Library (Moravskoslezska vědecká knihovna v Ostravě) is an important scientific and existing library in the Czech Republic and occupies the side wings of the town hall complex on Prokešovo Square in the city center.

The Philharmonic Orchestra, founded in 1954, was named after the Czech composer Leoš Janáček and works with well-known conductors and soloists around the world. 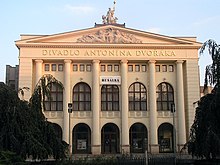 The Moravian-Silesian National Theater (Národní divadlo moravskoslezské) was founded in 1918 and also includes the Antonín Dvořák Theater with its neo-baroque opera house , as well as the Jiří Myron Theater, built in neoclassical style at the end of the 19th century.

The Ostrava Center For New Music (OCNM) was founded in 2000 by Petr Kotík and is the organizer of the Ostrava Days and the New Opera Days Ostrava (NODO) .

The international music festival Colors of Ostrava has been held in the city since 2002 .

The market square with the old town hall 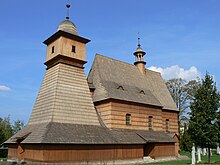 As the third largest city in the Czech Republic, Ostrava has numerous architectural and technical attractions.

Stodolní Street (German Scheunenstrasse ) is one of the largest entertainment areas in the Czech Republic. During the week the street is a pedestrian zone with restaurants, coffee shops and hotels, at the weekend it is an entertainment area for many party-hungry people from Ostrava and the surrounding area. There are over 60 clubs in the small area on Stodolní Street. Particularly known are z. B. the Café Černá Hvězda (German Black Star) and the Irish Pub Dublin .

The Ostrava Golden Spike athletics sports festival has been held since 1961 . It is currently part of the IAAF World Challenge and has become known for numerous world records.

The city is home to the ice hockey clubs HC Vítkovice Steel , which belongs to the top division of the Czech Republic, the Tipsport Extraliga , and HC Poruba , third division team from the Poruba district, and the Baník Ostrava football club .

In May 2015, Ostrava was next to Prague the venue for the Ice Hockey World Championship .

The city is divided into 23 districts with 37 districts:

Prominent residents and sons and daughters of the city are included in the list of personalities of the city of Ostrava .