The twin town and district town Frýdek-Místek (German Friedeck-Mistek , also Friedek-Mistek ) in Moravskoslezský kraj ( Czech Republic ) with 56,879 inhabitants (2016) was created on January 1, 1943 through the merger of two independent towns, the Moravian Friedberg (as Místek first mentioned in 1434) and the Silesian Friedeck (Frýdek). Frýdek is located on the right bank of the Ostravice River , right at the confluence with the Morávka , Místek on the left bank. The Ostravice is the traditional border between Moravia and Silesia. Frýdek-Místek is the seat of the district administration of the district of the same name . 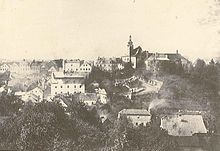 Photograph of the city of Friedeck, around 1865

The village of Jamnice or Jamnica in the Duchy of Teschen , which has since disappeared and was first mentioned in writing as Jannutha in the Liber fundationis episcopatus Vratislaviensis around 1305 , may have been the first settlement in the city. The exact location of this village has not yet been proven. It was probably located on the site of Staré Město (German Old Town ), but it may also have been in the corridors of the Frýdek district.

The fortress of Jamnitz was later rebuilt into a Gothic castle of the sovereigns, in whose catchment area the city, first mentioned as Fridek , was laid out between 1327 and 1386 . The name is derived from the Middle High German vride ( peace ) and eck ( corner ). At the beginning of the 15th century Friedeck became the center of the region and, together with the castle, protected the trade route through the Moravian Gate to Krakow on the national border. After the death of Duke Friedrich Casimir von Teschen , Friedeck was spun off from the Duchy of Teschen and sold as the minority Friedek in 1573 to the brothers Georg and Matthias von Logau ( Jiří and Matyáš z Lohova ). Later the families von Würben and Freudenthal , von Oppersdorf , Praschma von Bilkau (Pražma z Bílkova) and finally the Habsburgs (when it was bought by Albert Kasimir von Sachsen-Teschen and administered together with the Teschener Chamber ) took over the lands. During the period of minority rule, the importance of the Czech-speaking and Roman Catholic population in the city increased. In the 17th century, the city was ravaged by fire and the plague. In 1869 Friedeck became a Magister town . In the second half of the 19th century the city was industrialized and the number of inhabitants increased, e. B. in 1880 it was 5,826 (of which 1053 or 18.1% were German-speaking, 1890: 36.3%, 1900: 37.8%, 1910: 52.7%). In 1921 Friedeck had almost eleven thousand inhabitants. 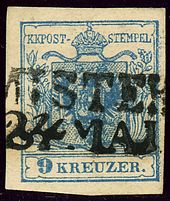 Místek is known for frequent floods. In its place was originally the market town Friedberg (Frydberk), which is reported for the first time in the will of Bishop Bruno von Schauenburg on November 29, 1267. Friedberg was destroyed during the wars of the Moravian Luxembourgers between 1386 and 1400. In 1402, Lacek and Wok von Krawarn sold some settlements to Prince Przemislaus I von Teschen , including the "Newen Part" - today's Místek (the name first appeared in 1434 as Miestko ). Between 1402 and 1581 the “Neustädtl” was connected to Friedeck together with the surrounding communities. The city later became independent again and became the property of the Lords of Hochwald . At this time, too, the city, for which the name Mistek became more and more natural, was hit several times by fires and floods. Since the beginning of the industrial revolution , the population has increased sharply. In 1834 the city still had 2,600 inhabitants, in 1900 three times as many lived here. The name Fridberg survived until the 16th century. In the maps of the 19th century, the city was only listed as Mistek.

During the occupation of the "remaining Czech Republic " by Germany, the soldiers of the 8th foot regiment defended themselves against the occupiers, who first penetrated the interior of the country through the Moravian Gate . On the evening of March 14, 1939, shootings broke out near Místek between the Wehrmacht and this Moravian regiment . During the occupation, Místek was officially given the name Friedberg, which has not been in use since the 17th century. The cities were merged with the surrounding communities.

Between 1960 and 1964, the Olešná dam was built on the southern edge of the municipality. Mainly used since 1983 to supply a cellulose plant with water, it has been upgraded for tourism in recent years.