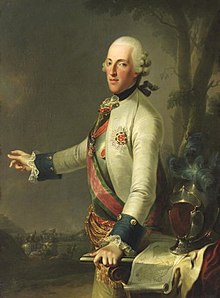 The Palais Archduke Albert, today his Albertina collection is located there

He was the thirteenth child and the sixth son of Friedrich August II. Elector of Saxony and King of Poland (as August III.), And the Austrian Archduchess Maria Josefa (daughter of Emperor Joseph I ) and thus grandson of Augustus the Strong and Emperor Joseph I in 1764 was Albert Dresdner Loge the three swords into Freemasonry added.

In April 1766 he married Archduchess Marie Christine , his second cousin and favorite daughter of Maria Theresa, in Vienna or Schloss Hof . Black was worn during the wedding because his father-in-law Franz Stephan von Lothringen had died shortly before . The marriage was one of the few love marriages among Maria Theresa's children and also one of the happiest. Albert Kasimir was born from the inheritance of his father-in-law with goods around Teschen ( Austrian Silesia ), d. H. the Teschen Chamber , and henceforth called himself Duke of Teschen. Due to its clever economic policy and favorable location, the area became one of the most economically successful in the Habsburg monarchy in the course of industrialization.

From 1765 to 1780 he acted as governor of Hungary in Pressburg , today's Bratislava (with the summer residence in Halbturn Castle ), then as Governor General of the Austrian Netherlands , where he had Laeken Castle built in Brussels . This castle was also used to house his art collection. Driven from Brussels by the Revolutionary Wars , the couple settled in Vienna, where the palace of Emanuel Teles de Silva was remodeled for him by Louis Montoyer . The Albertina named after him is still located in this palace . In 1792 he was only able to save two thirds of his art collection to Vienna, as one of the three transport ships sank in the English Channel in a storm .

During the Bar Confederation , he was considered a candidate for the Polish throne after the abdication of Stanislaus II August Poniatowski .

In the First Coalition War against the French revolutionary troops, Duke Albert was the commanding Reichsfeldmarschall .

In 1818 he founded a higher education institution for agriculture in Hungarian Altenburg , one of the first and the longest existing of its kind in Europe.

The marriage remained childless. In 1767, Marie Christine was given birth to a girl on May 16, but she did not survive the following day. After the difficult delivery, the mother developed puerperal fever . In the same year he was appointed Reich Field Marshal by the Kaiser and the Reichstag .

After the early death of his wife in 1798 from a stomach disease, he had a water pipe, the so-called Albertinische Wasserleitung , built from Hütteldorf to Vienna and only lived for his art collection, which passed on to his nephew and adopted son Archduke Karl . In the complex of the Hofburg belonging Augustinian church he of Antonio Canova a tomb for his wife build. His nephew Archduke Johann was also honored by him in his will and thus enabled to act as a great patron of Styria.

After his death, Albert Kasimir von Sachsen-Teschen was buried in the Capuchin crypt. His heart is in the heart of the Habsburgs' crypt in the Loreto Chapel of the Augustinian Church in Vienna , while his entrails were buried in the ducal crypt of St. Stephen's Cathedral in Vienna. He is one of those 41 people who received a “ separate burial ” with the body being divided between all three traditional Viennese burial sites of the Habsburgs (Imperial Crypt, Heart Crypt, Ducal Crypt).

In 1862 the Albertgasse in Vienna- Josefstadt (8th district) was named after him. In Hungary, the village of Albertkázmérpuszta , located directly on the Austrian border, bears his name, which arose around an estate that once belonged to Albert Casimir von Sachsen-Teschen.