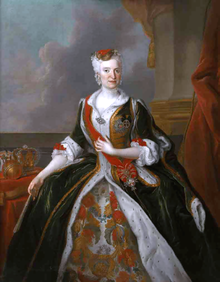 Maria Josepha Benedikta Antonia Theresia Xaveria Philippine of Austria (born December 8, 1699 in Vienna , † November 17, 1757 in Dresden ) was Archduchess of Austria from the House of Habsburg . Through her marriage to Friedrich August II. Or August III. she was Electress of Saxony and Queen of Poland since 1733 .

Maria Josepha was the eldest daughter of Emperor Joseph I and his wife Wilhelmine Amalie von Braunschweig-Lüneburg . She had two younger siblings, of whom Leopold Joseph died in 1701 while still a child and Maria Amalia became the wife of the Bavarian elector and later emperor Karl VII .

The Archduchess was educated appropriately and was raised strictly Catholic by her paternal grandmother, Eleonore Magdalene Therese von der Pfalz . In line with this upbringing, she later emphatically advocated the interests of the Catholic Church .

Augustus the Strong , who was both the Saxon Elector and the Polish King, tried to win Maria Josepha when she was a little girl as the future wife of his son Friedrich August . His motive for this marriage project was, in addition to the prospect of being able to better assert Saxony against the increasingly strong Prussia , also the hope that in the event of the male line of the House of Habsburg dying out, his son would have a good chance of gaining imperial dignity. The Habsburg house law of September 12, 1703 provided that any sons of Maria Josepha's uncle Karl (VI.) Should have priority over daughters of their father Joseph (I) in the line of succession, but that Joseph's daughters should take precedence over those of Charles. The latter priority was raised by Charles VI. but, after he became emperor in 1711, the Pragmatic Sanction of April 19, 1713 paved the way for his daughter Maria Theresa to succeed to the throne.

In addition to the good relations between Joseph I and Augustus the Strong, the fact that the electoral prince converted to the Catholic faith in Bologna in November 1712, following the example of his father, was decisive for the consent to the marriage of Maria Josepha to the Saxon Elector Prince Friedrich August . Friedrich August only made this change of denomination public on October 10, 1717 in Vienna. After the announcement of his engagement to Maria Josepha on February 26, 1718 and the recognition of the pragmatic sanction by the Archduchess, with which she renounced all claims to succession in the Austrian states , the couple's wedding was celebrated on August 20, 1719 in Vienna. For almost the whole of the following September, the glittering wedding celebrations that followed went on. a. Banquets and opera events were part of the stage in Dresden.

Maria Josepha, who like her husband went on hunting trips, gave birth to the following 15 children, all of whom were given the first or surnames Franz Xaver and Francisca Xaveria by their mother as an admirer of Saint Francis Xavier (in the following list, however, are only the most common first names of Maria Josepha's eleven children surviving childhood are listed):

Electress of Saxony and Queen of Poland 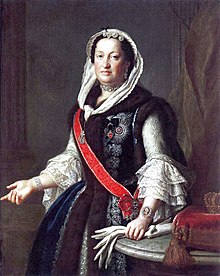 Maria Josepha as Queen of Poland

After the death of August the Strong (February 1, 1733), his son, Friedrich August II, became the new Elector of Saxony. Friedrich August's wife Maria Josepha now carried the title of Electress of Saxony. With the support of Austria and Russia , the elector was able to assert himself against Stanisław Leszczyński in the fight for the Polish throne. When August III. he was crowned King of Poland on January 17, 1734 in Cracow and Maria Josepha accordingly became Queen of Poland.

Maria Josepha's married life was exemplary, especially since her husband - unlike Augustus the Strong - had no relationships with other women. She paid a lot of attention to the upbringing of her numerous offspring, which task she carried out personally, contrary to the custom at the time, whereby she established very strict rules for her children. Since their two eldest sons died early, the third son Friedrich Christian received the status of heir to the throne. However, he was born with a disability and Maria Christina blamed herself for taking part in a hunting trip during pregnancy and falling from a horse in the process. Despite his handicap, Friedrich Christian remained Prince Elector.

Maria Josepha learned Polish , was politically active and often attended deliberations of the Polish Diet. However, she soon saw her political influence on her husband waning, as he increasingly only listened to the advice of her opponent, Count Heinrich von Brühl , and gave him more and more power. But she managed that her husband after the death of Charles VI. 1740 - admittedly in vain - made claims to the imperial crown, although Count Brühl had taken the opposite opinion.

In the cultural field, Saxony increasingly oriented itself towards the Baroque Austro-South German pattern. Maria Josepha and Friedrich August II. Both had a great passion for art and music. On the occasion of her birthday in 1733, Johann Sebastian Bach dedicated the congratulatory cantata “ Tönet, you timpani! Sound out trumpets! “, The music of which he later adopted to a large extent in his Christmas Oratorio .

In the field of religious policy, the Catholic-minded Elector-Queen campaigned for the promotion of her religious denomination in Lutheran -influenced Saxony, with the help of the Jesuits . She also supported the concerns of the Catholic Church in Poland, on which point she met the mood of the upper class there.

The imperial chapel in Dresden, consecrated to Franz Xaver in 1732, was built on Maria Josepha's initiative. In the same town, in 1746 she was responsible for the building of the Catholic Josephinen Stift , which offered poor girls a place to live and handicraft lessons, and in 1747/48 for the establishment of a Catholic hospital. Maria Josepha and Friedrich August II also arranged for the Catholic Court Church to be built in Dresden from 1739 to 1755 .

When King Friedrich II of Prussia occupied Saxony at the beginning of the Seven Years War in September / October 1756, Elector Friedrich August II and Count Brühl went to Poland, whereas Maria Josepha with her eldest son Friedrich Christian and his family in Dresden persevered and, as far as it was possible, offered resistance. In Dresden, in particular, the exchange of secret war correspondence took place, and Maria Josepha tried to deny the Prussian General Wylich access to the secret archives in three of her rooms in the royal palace. It was only when Wylich revealed to her that he would have to use force if necessary on the orders of his master that she was compelled to hand out the keys to the rooms in which the requested papers were kept. Because of her courageous demeanor towards the Prussian king, at least towards the end of her life she earned the respect and affection of the Saxons, whom she as a Catholic had not particularly valued for a long time.

Frederick the Great had Maria Josepha closely monitored. A good year after the Prussian invasion of Saxony and separated from her husband, she died on November 17, 1757, almost 58 years old, of Schlagfluss in Dresden and was buried there in the Wettiner crypt of the Catholic court church.