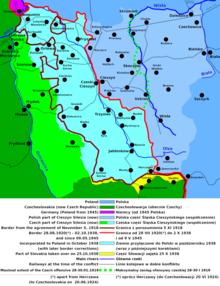 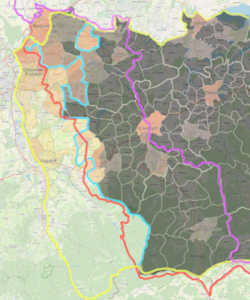 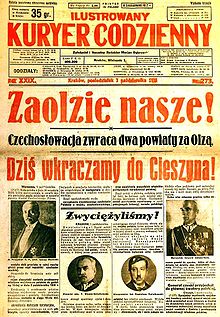 The Olsagebiet (also: Olsaland ; polish Zaolzie or Śląsk Zaolziański , Czech Záolží , Záolší or Českotěšínsko ) is a riverside Olsa situated part of Teschen Silesia (Polish Śląsk Cieszyński , Czech Těšínsko or Těšínské Slezsko ). In the last decades of the Habsburg Monarchy, the latter was the eastern part of the Crown Land of Austrian Silesia , before that it was once the Duchy of Teschen , then mostly called Eastern Silesia in German . The area and the city of Teschen, which lies on the eponymous river, were divided up after 1918. A twin town emerged, with Český Těšín in Czechoslovakia , now the Czech Republic , on the western bank of the river and Cieszyn in Poland on the eastern bank. In 1938/39, an area of ​​869 square kilometers in the Czechoslovakian part was annexed by Poland in violation of international law as a result of the Munich Agreement . This formed the Olsa region . During the Second World War in 1939 it was annexed by the National Socialist German Reich as part of the Polish Autonomous Voivodeship Silesia and the German name Olsa area was used for the entire district of Teschen . After the Second World War , the state of 1920 was restored.

The Olsa area is part of the Duchy of Teschen, which was split up in the 16th century and, in a reduced form, belonged to the Habsburg monarchy until 1918. At the end of the 19th century, Archduke Friedrich (Marquis Gero) undertook, with little success, a Germanization of the rural area or the population of the so-called water polaks living there , who largely belonged to the Polish- speaking Lachish language group in the form of the Teschen dialects . The Polish national movement was only started in the middle of the 19th century by Paweł Stalmach . In the north the largest mining area in Austria-Hungary developed around Karwin , from the 1870s a popular destination for emigration from neighboring countries, mainly cheap workers from Galicia . In the early 20th century the area belonged to the constituencies of Silesia 13 and Silesia 15 , where mostly Polish politicians Jan Michejda , Ryszard Kunicki and Tadeusz Reger won.

For the distribution of the language groups see: List of districts and statutory cities in the Duchy of Upper and Lower Silesia

After the end of the First World War in autumn 1918, new nation states emerged in East Central Europe , including Czechoslovakia and Poland .

This development was fraught with conflict in the Olsa area, as it was controversial between Poles and Czechs from the start. Poland justified its claims with the Polish-speaking majority of the population, but Czechoslovakia doubted that conclusions could be drawn about ethnicity from this (see referendums in the wake of the Versailles Treaty , which in Warmia and Masuria in particular were not based on ethnicity). At the same time, Foreign Minister Edvard Beneš claimed all of Cieszyn Silesia as far as Bielitz an der Bialka as part of historical Austrian Silesia for Czechoslovakia.

As early as November 5, 1918, just a few days after the two new states had declared their independence and there was still a lot of uncertainty about the course of the border, the responsible local national councils had initially agreed to draw the border more or less along ethnic lines, without any action of the governments in Prague and Warsaw and regardless of the local Germans and the Schlonsaken who opposed the Polish national movement (see Józef Kożdoń ). For Czechoslovakia, the part to the west of the Olsa that fell to it was of enormous economic and strategic importance, as the Bohumín – Košice railway, and thus one of the few efficient transport links between the Czech and Slovak parts of the country at the time, ran through it with the greatest capacity and far from the potential front line with Hungary.

After the area on the Olsa had become the subject of the election campaign for the Polish parliamentary elections at the end of 1918 and after the announcement of the call-up of the "Slavic" (thus probably also Czech) soldiers, the border region was occupied by several thousand Polish troops from November 5th the argument escalated. In January 1919 Czech troops marched in and parts of the Polish territory in what was formerly Cieszyn Silesia were occupied. On February 3, 1919, the Czech government, under pressure from the Entente , agreed to hold a referendum to decide on the future affiliation of the area.

After Beneš's efforts, the Council of Ambassadors of the victorious powers renounced the implementation of the referendum and on June 25, 1920 established the border course mentioned in the 1918 Border Treaty as binding. The Polish part of the former Cieszyn Silesia was assigned to the Autonomous Silesian Voivodeship , newly established in 1920 .

The definition of the border did not suit Polish interests, but at the time Poland was waging war with Soviet Russia in the east and was keen to end the dispute with Czechoslovakia as soon as possible. In this situation, the Czechoslovak Foreign Minister Edvard Beneš managed to determine the division along the Olsa River and surrender the disputed regions of the Spiš and the Arwa (Orava).

After the end of the Polish-Soviet War and the establishment of Eastern Upper Silesia through the referendum in Upper Silesia, the central part of the former Teschner Silesia, the Olsa region, which was assigned to Czechoslovakia, moved more into the focus of the stabilized Second Polish Republic . There was carried out until 1926, the expulsion of several thousand Poles in the area and to some extent the confiscation of their property, so that the tensions between Poland and Czechoslovakia continued to grow in and not excluding military solution to the problem in Poland and was from 1934 master-prepared.

On September 30, 1938, after the conclusion of the Munich Agreement , Poland set a return ultimatum, which expired on October 1, and concentrated forces on the border under General Władysław Bortnowski . In addition, the Zaolziański Legion was founded in Katowice . The dispute over the area meanwhile endangered the Soviet-Polish non-aggression pact of 1932. The Czechoslovak government finally gave in, and between October 2 and 11, 1938, Polish troops occupied the Olsa area (Zaolzie) . At the same time Germany occupied the areas of the Sudetenland and the Hultschiner Ländchen granted in the Munich Agreement . Shortly thereafter, around 30,000 Czechs, mainly those who had settled there after 1920, and around 5,000 Germans left the Olsa area.

After the German invasion of Poland , the Polish Olsa area was occupied by troops of Army Group South on September 3, 1939 and placed under the military area of ​​Upper Silesia . On October 26, 1939, the area was connected as part of the Teschen district to the Katowice district of the Prussian province of Silesia . The National Socialists planned the Germanization of the region, also by means of terror against the civilian population. The first arrests and shootings began immediately after the occupation, with one of the larger arrests taking place in the spring of 1940 as part of the " AB-Aktion " and mainly directed against Polish intellectuals. So-called “Poland camps” were set up in Oderberg , Freistadt and Petrowitz . The number of Jews murdered in Teschen during the German occupation is estimated at 2,000 to 3,000.

After the war ended in 1945, the border from 1918 was restored. However, during the Moscow negotiations, the People's Republic of Poland renewed its demands for zaolzie against Czechoslovakia. In addition to the previous ethnic argument, compensation for the losses of the territories conquered in the Polish-Soviet War in 1921 due to the westward displacement of Poland, in which Poland lost around 77,000 square kilometers (20 percent) of the national territory, was put forward. Czechoslovakia strictly rejected the request and suggested a population exchange as in eastern Poland. After years of tough negotiations, the dispute was finally settled. On June 2, 1958, the People's Republic of Poland renounced its territorial claim and both states agreed on minor border corrections and a border treaty with a border line along the Olsa. 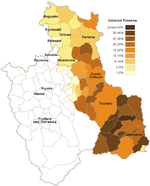 Proportion of Poles according to the 2001 census

Composition of the population of the Olsa region (Zaolzie) by language or nationality: