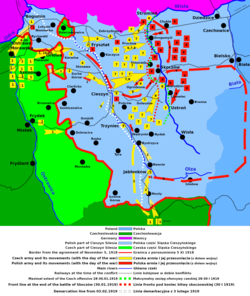 Map of the Polish-Czechoslovak Border War

The Polish-Czechoslovak border war took place from January 23 to 30, 1919 around the Cieszyn Silesia (in Austria from 1870 to 1920 also called Eastern Silesia ). Even after the end of the military actions, the border conflict was not over for a long time and was only considered to be resolved from 1958. Because of its brevity, the war is also known as the Seven Day War ( Sedmidenní válka in Czech ).

As a result of the First World War , the multi-ethnic states Austria-Hungary and Russia collapsed . This also created the states of Poland and Czechoslovakia .

The borderline between the two states in the area of ​​the former Duchy of Teschen was controversial from the start, because both Czechoslovakia claimed this part of the former Austrian Silesia and Poland tried to integrate these areas, in which the rural population was predominantly Polish-speaking, into the Polish state territory . The local national councils agreed on November 5, 1918 to draw the border along the ethnic border and took over administration on behalf of their states.

During the Paris Peace Conference , both parties agreed on a diplomatic solution to the border conflict. However, the negotiations held between July 23 and July 30, 1919 in Krakow, Poland , remained unsuccessful, as the Czechoslovak side strictly rejected the referendum demanded by Poland only in the districts of Freistadt and Teschen , as the Czech population represented a minority and that for Poland problematic, numerous Schlonsakische and German society ( Bielitz-Bialaer Sprachinsel ) in the Bielitz district left out . The peace conference followed the proposal to carry out the plebiscite in all of Cieszyn Silesia.

At the same time, Poland was waging war with Soviet Russia in the east and was therefore more willing to compromise in the dispute with Czechoslovakia. In this situation, the Czechoslovak Foreign Minister Edvard Beneš achieved the partition along the Olsa River against the surrender of the disputed regions around Spiš and Arwa . On June 25, 1920, the Council of Ambassadors of the victorious powers established the border course mentioned in the 1918 Border Treaty as binding without holding a referendum.

On July 28, 1920, a new border treaty in this regard was concluded after the victorious powers urged both governments to accept these conditions. This gave rise to the Olsa area , called Zaolzie ([the area] behind the Olsa ) or Śląsk Zaolziański ([Silesia] behind the Olsa ) in Polish historiography .

The conflict was officially resolved, but Poland had by no means given up its territorial claims. As a result of the Munich Agreement , it initially gave Czechoslovakia an ultimatum on October 1, 1938, and occupied and annexed the Czech part of the divided Olsa area the next day. The disputed area, which was incorporated into the German Reich after the German occupation of Poland, was divided again after the end of the Second World War on the basis of the borders between the two states that were valid before 1938.

The conflict was finally ended on June 2, 1958, when the People's Republic of Poland renounced its claim to territory and confirmed the border line on the Olsa with Czechoslovakia in a border treaty.