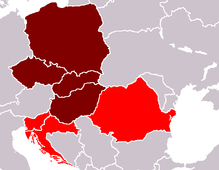 A clear definition of the geographical regions West and East Central Europe hardly makes sense because the historical development and the development status of the states located there would have to be taken into account.

The language used in Western and Central Europe roughly reflects the following assignment of states:

In terms of landscape, Eastern Austria belongs to Eastern Central Europe, the assignment of Austria to Western Central Europe is politically and geographically rooted in the mid-twentieth century. Physically, the border between the Alps and the Bohemian Massif can be seen here. This limit corresponds roughly to the climatic limits of the Atlantic area of influence to the Pannonian climate .

In recent times, the countries of Eastern Central Europe have also set themselves apart from their eastern neighbors. The new dividing line can be identified by the new east and south borders (which coincide with the respective borders of the new EU states - Poland, Hungary, etc.) of the EU. The core area of ​​Eastern Central Europe are the countries of the Visegrád Group (Poland, Slovakia, the Czech Republic and Hungary). Their development towards EU accession became apparent earlier. In these states, a willingness to reform began within the socialist parties in the 1980s. In this way u. a. the Polish Solidarność gain a foothold. In Hungary, the reform policy (around Gyula Horn ) led to the lifting of the Iron Curtain . The rough border of East Central Europe is the (eastern) 24th degree of longitude. In his famous Berlin – Moscow report . Wolfgang Büscher writes a trip on foot :

“The East is something that nobody wants. ... If I asked in Brandenburg where the East begins, the answer was: over in Poland, of course. When I asked in Poland, they said: The East begins in Warsaw, well, basically Warsaw is one of them. I was assured that western Poland and eastern Poland really couldn't be compared, that was something completely different, I'll see when I'm east of Warsaw. Another world - more provincial, poorer, dirtier. Just east. Ostig, as we say at home. Zonig. East of Warsaw, the answer was again beyond doubt: just up the road to Białystok. Everything to the left of her, to the west, is Catholic, and therefore well Polish. What is to her right is Belarusian Orthodox. "

Research institutes with a focus on East Central Europe

East Central Europe was the central research topic of East Research . The important researchers included a. Karl Valentin Müller , Eugen Lemberg and the historian Hermann Aubin . Important research institutions were the Charles University in Prague and the Collegium Carolinum .