The Duchy of Freudenthal ( Bruntálské knížectví , also Bruntálsko in Czech ) was a part of the Opava branch of the Přemyslids from 1377 to 1452 .

From 1682 to 1684 it was an independent duchy when the Grand Master of the Teutonic Order Johann Caspar von Ampringen was Duke of Freudenthal in his capacity as Governor of Silesia .

The north Moravian area of Freudenthal was initially owned by the sovereign and was later assigned to the newly founded Přemyslid Duchy of Opava . After its division in 1377, it was spun off from this and was then temporarily owned by the Dukes of Jägerndorf and the Dukes of Ratibor , whose rulers were also Přemyslids at that time. The following dukes carried the title Duke of Freudenthal : 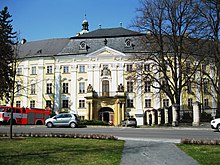 After the Grand Master of the Teutonic Order, Johann Caspar von Ampringen, was appointed Oberlandeshauptmann von Silesia in 1682, the rule of Freudenthal was increased to an independent duchy for his lifetime. The increase had become necessary because according to the great state privilege of the Bohemian King Vladislav II from 1498 the governor of Silesia should always be a Silesian prince.

After the death of Grand Master Johann Caspar von Ampringen in 1684, the duchy expired. The rule of Freudenthal remained in the possession of the Teutonic Order.