Lothar's father, Count Gebhard von Süpplingenburg , belonged to the Saxon nobility and the opposition to Emperor Heinrich IV . Lothar's mother was Hedwig von Formbach , the daughter of Gertrud von Haldensleben, who was married to Duke Ordulf von Sachsen for the second time . Lutterloh in the district of Celle in the Südheide is named as Lothar's place of birth in the old Bünting Chronicle . Lothar's father died shortly after his birth in the battle of Homburg an der Unstrut on June 9, 1075. Therefore, the time of birth is to be assumed shortly before this date. Lothar grew up at Castle Süpplingenburg , which was also his ancestral home.

In 1100, at the age of 25, Lothar married Richenza von Northeim († 1141), the daughter of Heinrich the Fat and his wife Gertrude the Younger of Braunschweig , the last trustee of the Brunonian inheritance. In 1104/06 Lothar supported Heinrich V in the war of the throne against his father, Emperor Heinrich IV.

When Duke Magnus Billung died in 1106 without a male heir, King Heinrich V gave the Duchy of Saxony to Lothar and not to Magnus' son-in-law, Duke Heinrich the Black of Bavaria . The circumstances of this appointment are unclear. Some historians say that Heinrich V wanted to appoint a weak duke, and that he believed Lothar, who until then had only had limited possessions, to be such a duke. This is supported by the threat of a concentration of power under Duke Heinrich the Black, who would then have ruled over two large areas. Others suspect that Lothar was installed as a descendant of Saxon opposition families in order to achieve a compromise with them. He was certainly not the strongest prince in the duchy at the time. Nevertheless, he operated an independent policy in Saxony from the start and, for example, handed over the counties of Holstein and Stormarn to the Schauenburgers in 1111 . In the Saxon-Salian dispute, he took the lead in the anti-imperial opposition and immediately made a name for himself as a clever politician and a skilled military leader; Although he was temporarily deposed as duke in 1112, after he had submitted to the emperor as penitent in 1114, he received his duchy back and supported Heinrich V against the Lower Rhine-Westphalian opposition. Soon, however, he and other East Saxon princes again openly sided with the rebels and took part in the battle of the Welfesholz , in which the emperor's army was defeated by the Saxons in 1115. In addition, he and his wife inherited a large part of the Northeim, Brunon and Haldensleben estates from 1116 through the death of Count Otto II von Northeim , Gertruds von Haldensleben and Gertruds von Braunschweig. In the next few years he expanded his position in Westphalia in further campaigns and appointed new counts as vassals. From now on, the Duke's political leadership role was undisputed. He systematically expanded his political position in the empire through his territorial policy; His political center Braunschweig , which he granted city rights, particularly benefited from this .

When Emperor Heinrich V tried to appoint Wiprecht von Groitzsch, a new Margrave of Meißen he liked, Lothar, as the leader of Saxon nobles, rose against this decision and deposed Wiprecht by force of arms. He then installed Konrad von Wettin as the next entitled heir and handed over the Lausitz mark to Albrecht den Bären . In Halberstadt , he influenced the choice of a new bishop he liked. At a Reichstag in Bamberg in 1124, at which Lothar did not appear, it was decided to overthrow him by a war, which however never came. Most recently he was the first duke to rule the entire Duchy of Saxony.

Already on the occasion of the consecration of the Brunswick Aegidienkloster in 1115 Lothar and Richenza, the daughter of the founder, were present, which was interpreted as a political signal to the emperor. When Heinrich V died in 1125, Lothar was surprisingly elected German king on August 24 of the same year, with the result that the territorial focus of medieval history again shifted to the northern Alpine part of the empire.

Seal of Lothar III. on a document from 1131 confirming a shipping right to the Echternach Abbey
→ Main article : Election of a king in 1125

Heinrich V, himself childless, had actually chosen his nephew, Duke Friedrich II of Swabia, as his successor, but the Archbishop of Mainz, Adalbert I , opposed this. At the court day in Mainz there were ultimately three candidates for the royal throne: in addition to Lothar and Friedrich, Leopold III also counted . , Margrave of Austria, as Henry V's brother-in-law and stepfather of Frederick II. Chances of being elected, although his prospects were less than those of the other two.

A committee was formed for the election, which consisted of ten representatives from each of the four great tribes of Saxony , Swabia , Franconia and Bavaria . You should agree on one of the three candidates. Since the Swabian party did not agree to accept any outcome of the election right from the start, the Saxon duke was raised to the rank of new king after Duke Heinrich the Black of Bavaria had switched to his side. This change of sides is explained by the marriage promise between Lothar's daughter Gertrud and the son of Henry the Black. Finally, the defeated Frederick also paid homage to the king, who henceforth became Lothar III. called. The official coronation by the Archbishop of Cologne took place on September 13th in Aachen . 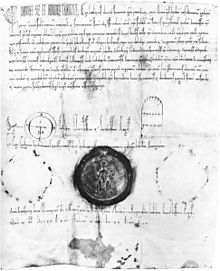 Certificate of Lothar III. for Bishop Herimann von Augsburg, to whom he confirmed the donation of the Benediktbeuern imperial abbey ; issued on November 27, 1125. Munich, Bayerisches Hauptstaatsarchiv, Kaiserselekt 450

New disputes with Duke Friedrich II arose when he refused to hand over goods to Lothar, which the king regarded as imperial goods , but the Hohenstaufen as heir to the Salians . Since the disputed goods had long been administered together with neighboring old Salian household goods , their origin could hardly be determined and the goods were therefore difficult to separate legally. Lothar advocated the principle that all the goods in question had now become imperial goods through the extinction of the Salians. The first fighting between Lothar and the Staufers broke out as early as 1125. They increased in the following years, and after a campaign by Lothar against the Hohenstaufen in 1127 before Nuremberg had failed, the Swabians together with the Franks raised Friedrich's younger brother Konrad to the rival king. Konrad immediately sought support for his kingship in Italy, which he found particularly in Milan (in Monza in 1128 he was crowned King of Italy with the Iron Crown ). His plan to establish a solid power base in Italy, however, failed. In 1132 he returned to the empire north of the Alps.

In order to prevent the transition of Burgundy to a power hostile to the empire, in 1127 he transferred the "Principatus Burgundiae", the so-called Rectorate of Burgundy , to his faithful follower Konrad von Zähringen .

Interfering in the inheritance dispute over Bohemia

Soběslav I of Bohemia from the Přemyslid dynasty became Duke as his successor after the death of his brother Vladislav I in 1125, but had to assert the throne against the claims of Otto II of Moravia - Olomouc , who called Lothar for help. Lothar marched into Bohemia with an army in 1126, and on February 18, 1126 the Second Battle of Chlumec took place . Soběslav achieved a convincing victory. His rival Otto fell and Lothar was taken prisoner. Soběslav let Lothar enfeoff him with Bohemia before he released him.

In the meantime there had been another schism during the papal election in Rome in 1130 . After the death of Honorius II there were two promising candidates for the papacy. First, a minority of the cardinals elected Innocent II as the new pope, before the remaining cardinals named Anaclet II pope in a tumultuous process. Both popes claimed to have been legitimately elected, but initially Anaklet was able to prevail and Innocent had to leave Rome and flee to France. While Anaklet was only able to secure the support of Roger II of Sicily, Innocent succeeded with the help of Bernhard von Clairvaux , the French King Louis VI. and to win the English King Henry I for his side.

Lothar was also wooed by both popes, with both promising him the coronation of emperor. Again it was Bernhard von Clairvaux, who decisively influenced the decision of Lothar III. steered in favor of Innocent. In March 1131 these three met in Liège, where Lothar performed the strator service for the Pope and promised him help in the fight against Anaklet. He finally dropped the original condition, the reinstatement of the full investiture right in return.

In the following year Lothar, who was still in conflict with the Staufer anti-king, set out for Italy with a small army. Since Anaklet successfully defended St. Peter's Church, one had to move to the Lateran Basilica for the imperial coronation . There Lothar received the imperial crown from Innocent on June 4, 1133. Shortly afterwards, Lothar set off again on the journey home, although Innocent had not yet prevailed against Anaclet and was only driven back from Rome a short time later by Roger II.

Burial place of Lothar III: The imperial cathedral in Königslutter

In the empire north of the Alps, Lothar finally succeeded in 1135, thanks to the help of Heinrich the Proud , who had been Duke of Bavaria since the death of his father, Heinrich the Black, in 1126 and had married Gertrud, Lothar's only daughter, the Staufer to defeat. In September Konrad was once again accepted into imperial favor in Mühlhausen and undertook to take part in the emperor's second campaign in Italy. Since he was now the undeniable ruler of the empire, Lothar set out for this in 1136 with a much larger army than last time. So this campaign promised to be more successful. Indeed, Roger II soon sought peace. However, there were now conflicts between Lothar and Innocent II over the sovereignty of the Duchy of Apulia, and there were tensions in his own army, so that Lothar also broke off this Italian campaign and set out on his way home.

Baroque grave sculpture in the imperial cathedral Königslutter: Lothar between his wife Richenza and their son-in-law Heinrich the proud

On the return journey he gave his son-in-law Heinrich of Bavaria the margraviate of Tuszien and the duchy of Saxony. He also transferred the imperial insignia to him , which, depending on the point of view, was interpreted as a designation for the new king or not. On December 3, 1137, Lothar died on the return journey near Breitenwang . A month later, the death of Anaclet II also ended the papal schism. Emperor Lothar's remains were brought to Königslutter . There he was buried on December 31, 1137 in the collegiate church of St. Peter and Paul, begun by him in 1135 and still unfinished . When the grave was opened in 1620, a sword and an orb were found among other things . With the Kaiserdom, Lothar has set himself an outstanding architectural monument. His reign was also more than just an episode between the Sali and Staufers. It is more of a self-confident rule over the empire, even if the political vision of the establishment of a Guelph kingdom on March 7, 1138 in Koblenz was destroyed by the Hohenstaufen coup.

After his death, Lothar was mourned as the emperor of peace who had given his country peace, harmony and order. Braunschweig was with Lothar III. first moved into the focus of European politics and history.