Coat of arms of the Duchy of Silesia

The Silesian Piasts were one of five lines of the Polish ruling dynasty of Piast . In the 12th and 13th centuries this had split into a multitude of lines that were at times warring with one another. The line that had ruled the Duchy of Silesia since 1138 split into different branches in 1249, which then ruled most of the Duchy of Silesia . Five Silesian Piasts became Polish senior dukes .

The Silesian Piasts gradually broke away from the Union of Polish Duchies between 1289 and 1342 and placed themselves under the Bohemian Crown . With the Treaty of Trenčín in 1335, the Polish king Casimir the Great from the line of the Kujavian Piasts renounced the feudal sovereignty over the Silesian duchies in favor of Bohemia. In 1348, the Roman-German and Bohemian King Charles IV formally incorporated Silesia into the Bohemian crown and thus also into the Holy Roman Empire . Many of the Piast duchies fell in the 15th and 16th centuries as settled fiefdoms to the crown of Bohemia and were partly re-awarded by this, as the Silesian Piast branches had renounced the formation of a feudal community. The last branch of the Silesian Piasts became extinct (as the last of the five Piast lines) in the male line in 1675 with Duke Georg Wilhelm von Liegnitz-Brieg-Wohlau.

The name Piast (or Polish od Piast ) was never used by the members of this ruling family, but only coined by the Polish historian Adam Naruszewicz (1733–1796). The Lower Silesian Piast lines carried the title Dukes of Silesia (possibly with the addition of the territorial designation), the Upper Silesian called themselves Dukes of Opole .

Around 600 AD, Western Slavs immigrated to the area around the Vistula and Oder. The collective term Polanen (for example "field residents") is not mentioned in Geographus Bavarus (9th century). The Polanen appear after the Poljanen were previously mentioned in the Nestor Chronicle near Kiev . The legendary progenitor of the Piasts is said to have been a prince of the Polans named Piast († around 870). The first historically tangible Piast ruler was Mieszko I († 992), who subjugated the neighboring areas of Lesser Poland , Silesia and Pomerania from his power base in Greater Poland and his empire, which was still named "Schinesghe" at the end of the 11th century, in the Dagome Iudex formally donated to the Pope in order to have it confirmed by him. In the year 1000 Poland became a separate ecclesiastical province through the establishment of the Archdiocese of Gniezno (including the Diocese of Wroclaw ) and became a kingdom through the coronation of Boleslaw I , but not all subsequent rulers from the Piast dynasty accepted the title of king, most of them remained dukes in their sub-territories and became designated senior dukes for Poland .

In the vain hope of reducing inheritance disputes, Bolesław III shared . Schiefmund (1102–1138) together with the introduction of the Seniorate Constitution Poland among his four sons:

The first parents of the Silesian Piasts were Duke Władysław II "the expellee" and Agnes, daughter of the Austrian Margrave Leopold III. They were expelled by Władysław's stepbrothers together with their sons in 1146 and were accepted at the court of the Roman-German King Konrad III.

Only four years after Władysław's death were his sons Boleslaw I and Mieszko I allowed to return to Silesia in 1163 with the help of Emperor Frederick I , which their uncle, Duke Bolesław Kraushaar , had to transfer to them. After the brothers had initially ruled together, disputes led to the division of the country. The older Boleslaw received Central and Lower Silesia with the center of Wroclaw , Mieszko received the smaller Upper Silesian area Ratibor - Teschen , which was enlarged in 1177 to include the castellanias Bytom and Auschwitz . During his reign, Boleslaw campaigned for the country's expansion and promoted the colonization of the country with German settlers ( Deutsche Ostsiedlung ); German knights took on the role of locators , built numerous castles and became Silesian vassals. In the following two hundred years, the immigrants founded around 1200 villages and 120 cities under German city ​​law .

Boleslaw I's son Heinrich I married Hedwig von Andechs in 1186 , who was canonized in 1267 . In 1202 he had to cede the area of Opole to his uncle Mieszko , who in 1210 became Senior Duke of Poland for one year as Mieszko IV. At the same time the mutual right of inheritance between the Silesian Piast branches was abolished. This split the line of the Dukes of Opole . After all, Heinrich became Senior Duke of Poland in 1232. His son Heinrich II had to fight hard for the position of senior duke. The last Silesian in this position was Heinrich IV. Probus , as senior duke Heinrich III., He died in 1290. 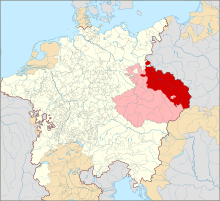 As early as 1289, Duke Casimir II of Cosel - Bytom was the first Silesian ruler to submit to the Bohemian fiefdom . Until 1342, all Silesian Piast princes, with the exception of Schweidnitz, took their principalities as fiefs from the King of Bohemia . After the Polish King Casimir III. The great man had already renounced all claims to Silesia in the Treaty of Trenčín in 1335 , the incorporation of Silesia into the Crown of Bohemia was easily possible. In the same year the important Duchy of Wroclaw fell to the Bohemian King, who from then on appointed the elder of the city council as governor. After the death of the childless Duke Bolko II. In 1368, the Duchy of Schweidnitz was the last Silesian duchy to join Bohemia as a hereditary duchy. The Polish chronicler Janko von Czarnków reported around 1370 that the Silesian Piasts were no longer considered as members of the line of succession for the Polish throne from then on. The testamentary transfer of this duchy to Bohemia was agreed on the occasion of the marriage of Bolko's niece and heiress Anna von Schweidnitz to the Bohemian King and Roman-German Emperor Charles IV . The Bohemian kings did not reassign the fief, but instead appointed provincial governors in the Duchy of Schweidnitz-Jauer.

The Silesian dukes had their own rulership rights, but as Bohemian vassals they were subject to a German elector and were therefore only princes who were directly (or imperial ) and not imperial . They did not belong to the imperial estates and did not receive a seat or vote on the imperial diets . Since the 15th century, they have met regularly at the Silesian Princely Days. The descendants of the Polish royal dynasty had meanwhile adapted to the subjects they had called into the country and had gradually become German themselves; most of them converted to Protestantism after the Reformation .

The rulership structure often changed with inheritance in every generation, territories were often united and separated again. If a house went out, its territory fell as a hereditary principality to the Bohemian sovereign , who initially provided the House of Luxembourg , from 1437 the Albertine branch of the Habsburgs , after the interludes Georg von Podiebrad and Matthias Corvinus then from 1490 the Jagiellonians and from 1526 up to End of the Bohemian suzerainty through the Peace of Berlin (1742) the Habsburgs. Most, but not all, of the duchies in Silesia were ruled by Piast dukes, some historically belonged to Moravia (such as the Duchy of Opava ) and were subordinate to the Přemyslids , others were given to other families by the Bohemian feudal lords after the Piast lines there died out.

In the male line, the Silesian Piast dynasty died out in 1675 with Georg Wilhelm von Liegnitz-Brieg-Wohlau, in the female line in 1707 with his sister Charlotte von Holstein-Sonderburg-Wiesenburg .

Important residences of the Silesian Piasts