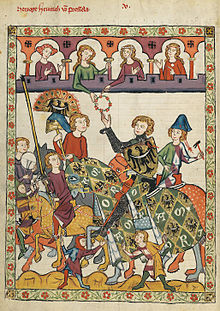 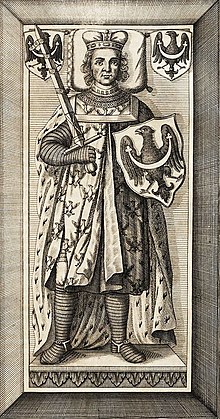 Heinrich was married to Konstanze († 1351), a daughter of Duke Wladislaus I of Opole , who he rejected in 1286 for unknown reasons. In 1287 he married Mechthild († ~ 1290/98), daughter of Margrave Otto V of Brandenburg, a son of Otto III. of Brandenburg and head of the Ottonian branch of Brandenburg. The marriage remained childless. 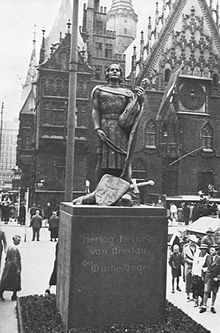 Monument to Henry IV of Breslau 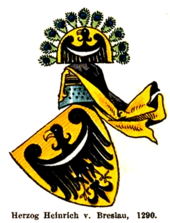 Coat of arms of Henry IV of Breslau

Heinrich's grandmother was Anna of Bohemia . This is probably why he was brought up in Prague, where he was under the influence of King Ottokar II Přemysl . His duchy was limited to the eastern part of what was later known as Lower Silesia , including Breslau . After the death of his father in 1266, his brother Wladislaw von Schlesien took over the guardianship of Heinrich and his duchy. He died in 1270 and in his will he designated Heinrich as his sole heir. Henry's new guardian, who mostly stayed at the Prague court until 1273, became King Ottokar. In 1271 Heinrich took part in a campaign by Ottokar to Hungary. In 1272 he made Wroclaw the capital of Silesia and granted it great privileges. Since 1274 he had the title addition "Lord of Breslau". After reaching the age of majority, Heinrich's auxiliary troops fought against Rudolf von Habsburg in 1276 . Taking advantage of Ottokar's weakness after the defeat, Heinrich was captured by his uncle Boleslaw II in Yeltsch on February 18, 1277 , taken to Lehnhaus Castle and only released on July 22, 1277 after the Neumarkt and Striegau areas were ceded.

After the death of King Ottokar in 1278, Heinrich raised his hopes for the reign in Bohemia. In 1280 he was the first Silesian duke to take the feudal oath for his country and received it back as a fiefdom from Rudolf von Habsburg . Presumably out of gratitude, Rudolf also instructed him to enjoy the Glatzer Land for life .

With the Breslau bishop Thomas II. He led an immunity dispute , which also involved the tithes payments from the German-speaking villages. In 1274 Heinrich took part in the Second Council of Lyon , where he complained about Bishop Thomas. With the clergy on his side, he was able to maintain his position, although he was temporarily banned. On the advice of the Meißner provost and later bishop Bernhard von Kamenz , who had acted as Heinrich's chancellor since 1279, Heinrich pledged Zuckmantel and Edelstein Castle as reparation to the bishop on September 6, 1281 , from which Nikolaus I von Troppau had previously devastated the Neisse diocese would have. But just a year later Heinrich and Thomas led a new dispute over the tithe, which led Heinrich to cede 65 named villages in the border forest area to the bishop on the basis of an arbitration award . In 1284 Heinrich occupied these villages and claimed their taxes and income for himself and thus drew the episcopal ban on himself. The Synod of Łęczyca in 1285 also pronounced an interdict on Henry. The Polish episcopate was against him because the German settlers opposed the levying of St. Peter's penny . National antipathies against the Silesian-German Minorites are also said to have played a role.

After the death of the Krakow Duke Leszek II. In 1288 Heinrich gained the ducal dignity of Krakow under the influence of the German citizenship of Krakow, which he had to defend against Władysław I. Ellenlang von Kujawien and Bolesław von Płock . After the castle was handed over to him, he returned to Wroclaw.

On January 11, 1288 Heinrich and Bishop Thomas reconciled in Breslau. Heinrich donated the richly furnished collegiate church of the Holy Cross on the cathedral island. The equipment also included 17 canon positions. In the same year he ended the dispute over the Lubusz Land with Brandenburg in order to be free for the war of inheritance for the Polish senior dignity against his relatives, the Piast Władysław I. Ellenlang von Kujawien and Przemysław II. Von Wielkopolska . In 1289 he finally took possession of the Duchy of Lesser Poland- Cracow. Thereby he became Senior of Poland and marked one of the last climaxes of the rule of the Silesian Piasts in Poland.

Shortly before his death, Heinrich granted the church the privilege with which he confirmed the bishopric's goods and possessions and granted sovereignty over the Neisser-Ottmachau area . The power position of the Silesian church connected with this led in the following centuries again and again to arguments between the dukes and the church. Since Heinrich had no biological descendants, the Duchy of Breslau inherited Heinrich III in his will. from Glogau. However, as a result of resistance from the citizens of Breslau, it fell to Heinrich von Liegnitz . Heir to Kraków and Sandomir was Przemysław II.

The assumption that Heinrich was poisoned has not been proven. His body was buried in the Kreuzkirche in Breslau .

A few years after his death, Heinrich was immortalized in the Heidelberg song manuscript . Under his name Heinrich von Pressela , two German minne songs and a tournament scene were handed down there.