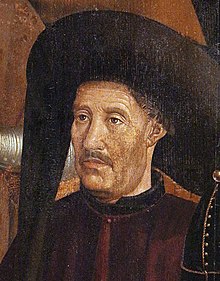 Heinrich was the fourth son of the Portuguese King John I and his wife Philippa of Lancaster , brother of Ferdinand the Holy and the Portuguese King Edward I. In 1415 a fleet under his leadership conquered the North African city and fortress of Ceuta . For this he was made Duke of Viseu . From 1420 he was the secular administrator of the Order of Christ . Royal descent and his offices gave him considerable financial resources, which he used to promote seafaring. In 1437 he commanded another campaign to snatch Tangier from the Moors , this time unsuccessfully.

In the years 1427 to 1432 Henry's ships discovered and settled the Azores . Then Heinrich set about bringing the Canary Islands into Portuguese possession. To do this, he first took the diplomatic route by asking Castile to grant Portugal the right to occupy this group of islands. When this did not work - Castile insisted on its sovereignty over the islands - Henry's brother King Edward turned to the Pope and the Pope , obviously ignorant of the Castilian claims, complied with Edward's request. John II of Castile immediately raised an objection through his ambassador. Thereupon the Pope made it clear that he had given the Portuguese permission to conquer the Canary Islands only on condition that no other Christian prince could lay claim to it.

Heinrich himself did not go on expeditions. He owes his nickname to his commitment as a promoter of seafaring. He was very well read and knew the reports of earlier explorers to Asia such as Marco Polo , Wilhelm von Rubruk or the Arab world traveler Ibn Battuta .

The fact that he founded a nautical academy ( escola náutica ) is an invention of later centuries that Portuguese historians have not represented for a long time.

The voyages of discovery 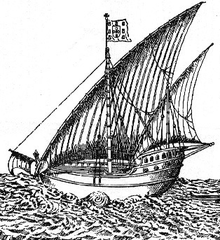 Portuguese caravel of the 16th century

As governor of the Algarve , Heinrich initiated an ambitious program to open up a sea ​​route to India from 1418 .

The prince initiated numerous voyages of discovery along the African coast, which were mainly carried out with ships of the caravel type . The knowledge gained in navigation , cartography and shipbuilding was fundamental for all subsequent Portuguese voyages of discovery. From the beginning, the Portuguese pilots and captains were obliged to record in secret logbooks, the Roteiros , all the experiences and knowledge they had gathered on their voyages and which were important for navigation . In the second half of the 15th century, the Portuguese were already using the quadrant : by determining the height of the North Star , the geographical latitude could be calculated. By the time the Infante died, more than 2000 nautical miles of West African coastal waters had been navigated and mapped.

Heinrich the Navigator's motives were varied. On the one hand, it was hoped to bypass or eliminate the Arabs in the trade in pepper , gold , ivory and slaves , and on the other hand, the prince wanted to promote and spread the Christian faith. They searched for the legendary Christian priest-king Johannes , who was suspected to be in Asia, sometimes in Africa even before the time of Henry the Navigator. With its help one wanted to push back Islam . These ideas gave way to commercial considerations during his lifetime .

38 years after Heinrich's death, his preliminary work led to the discovery of the sea route to India by Vasco da Gama and the strengthening of Portugal in the Indian trade , to the development of the sea route around Africa to rear India and thus to Portugal's position as a world power .

The Casa da Índia was both the central authority for the administration of all overseas territories of the Kingdom of Portugal and the central trading point and clearing house for all areas of overseas trade. As an economic institution, it functioned like a trading post or a trading establishment.

The forerunners of the Casa da Índia emerged in the wake of the Portuguese voyages of discovery along the African coasts and the associated trading opportunities. The Casa de Ceuta was founded in Lisbon as early as 1434 . However, it was not very successful because after the Portuguese conquest of Ceuta in 1415, the trade routes and flows of goods connected with the city moved to other places. Around 1445, the Casa de Arguim and de Guiné were founded in Lagos on the Algarve , both of which, also known as Companhia de Lagos , served the development of Portuguese trade with West Africa . After the death of Henry the Navigator, both houses were moved to Lisbon in the sixties of the 15th century and later merged into the Casa da Guiné e da Mina .

Important discoveries under Henry the Navigator

The Padrão dos Descobrimentos in Belém shows Heinrich as the leader of the Portuguese explorers.

During landings on their voyages of discovery, the captains were obliged to set up a so-called padrão (a stone column with the coat of arms of the Portuguese king and inscriptions) that they had brought on board . At prominent, newly discovered points such as capes or estuaries, the captains had to chisel names and dates into the stone under the Christ cross and the coat of arms of Portugal .

The monument erected in 1960 on the 500th anniversary of the death of Heinrich the Navigator in Dili with the Portuguese inscription: "Through seas that have never been sailed before".

A statue can be seen in the Padrão dos Descobrimentos near Lisbon; this was built 500 years after his death.

In the Portuguese city of Lagos , a monument to Heinrich has stood on the Praça da República (Republic Square; also called Praça do Infante Henrique) since 1960.

The capital of East Timor , Dili , honors Heinrich with a monument in front of the government palace .