Replica of the historic La Pinta caravel , one of the three ships with which Columbus crossed the Atlantic. Located in the “Caravel Dock” of Palos de la Frontera in Spain. 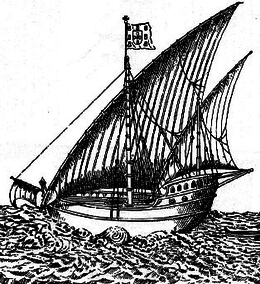 Portuguese caravel of the 16th century

contemporary depiction of a caravel (around 1520)

The caravel was a two- to four-masted sailing ship type from the 14th to 16th centuries. Features were 100 to 180 tons displacement , shallow draft, high stern and mostly latin rigging . Caravels were fast and showed very good properties on the wind .

The Portuguese and Spanish caravels played a crucial role in the discovery, research and trade trips along the West African coast and to America.

The online Etymology Dictionary derives the origin of the term from the French word caravelle , which in turn refers to the Portuguese caravela . Here a line is drawn to the late Latin carabus (small, leather-covered, braided boat) or the Greek karabos .

In another essential line of development, the literature very often refers to the influence of the Arabs . The Portuguese cáravo is derived from the Arabic qârib or carib ; these are all names for a small fishing or coastal boat with a latin sail .

In addition to these positions, most of which can be found in the literature, other etymological or “ folk etymological ” views are represented.

In Portuguese z. B. the term caravela with carvalho (oak) as a building material for caravels. Another possible line of development relates to the Portuguese term carav (o) à vela (for example: small boat under sails / sailboat).

In German, caravel is often associated with the name Kraweel (or Karweel), since the caravels, in contrast to the Nordic design with clinker planking , had smooth or kraweele hull planking .

Background and requirements for the development of the caravel

Under the patronage of Heinrich the Navigator , when the Portuguese conquered Cape Bojador in 1434, they entered waters of the Atlantic , whose wind and current conditions no longer allowed an easy return journey before the wind .

Major technical inventions such as compass , astrolabe or Jacob's staff or very precise nautical charts have already been used. However, as the distances from the home ports became greater and greater, the Portuguese increasingly needed ships that could cover long distances quickly and, if necessary, without stopping. This not only required the ability to sail close to the wind , but also the ability to carry enough provisions and spare parts for a longer journey. Ships were needed which, even without the technical capabilities of a shipyard, would allow the hull to be overhauled and other repairs carried out, even in unfavorable locations. Furthermore, in order to continue the Portuguese discoveries, these ships had to be able to secure the exploration of (also adverse) current and wind conditions in the Atlantic and also offer the possibility of navigating shallow coastal waters and rivers.

Building on the experience of Portuguese sailors sailing the Atlantic, the caravel has increasingly developed into such a ship since the 1940s.

Development history of the caravel 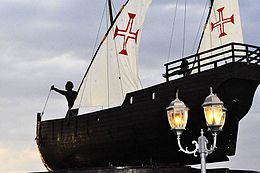 The development of the caravel as a ship type shows two main lines of development:

As a precursor, a in the Algarve and the Atlantic coast as may barca pescareza (30-50 t) developed fishing boat are considered, the Latin heritage sails and single-masted still without cover required crew already (depending on the size) of between 10 and 20 men. Similar ships were still used for voyages of discovery until the 1830s.

In general, it can be said that the caravela developed on the Iberian Peninsula goes back to types of ships that were used for centuries in fishing and in river and coastal shipping and later also in ocean shipping.

It turns out to be difficult to define a uniform basic type of caravels of the 15th century. Most of the literature describes a two-masted two-masted ship with a latin sails and aft fort , which had a continuous deck and a load capacity of 40–60 toneladas (in Portugal in the 15th and 16th centuries approx. 32–47.5 t) with a relatively shallow draft and required a crew of up to 20 men. These ships had a length of approx. 20-25 m (with a length-to-width ratio of approx. 3 to 4: 1) and could also be moved with oars when there was no wind. They were planked kraweel, d. H. with planks lying next to each other - in contrast to the overlapping planks in the clinker brick construction. The rudder was amidships. In the last quarter of the 15th century the caravels were equipped with light artillery . She was very capable of sailing high upwind, but a bad sailor in aft wind .

This type of ship was the standard ship of the Portuguese and Spanish voyages of discovery, with it the sea route south along the African west coast was explored, the current and wind conditions in the South Atlantic were researched, the Cape of Good Hope was circled and the Atlantic crossing was realized. The Portuguese chronicler Gomes Eanes de Zurara documents in Chapter XI of his Crónica do descobrimento e conquista da Guiné for the first time for the year 1440 the use of caravels on the Portuguese voyages of discovery.

At the end of the 15th century, the line of development of the caravel split again. On the one hand, the caravela latina , the caravela latina , was further developed. In addition to two-masters, three-masters with a load capacity of up to 80 toneladas (approx. 63.5 t) and approx. 30–35 m in length were built, on which a crew of up to 60 men drove. These relatively small, but very fast and manoeuvrable ships served in the navies of the Iberian states until the second half of the 18th century mainly as news and reporting ships, as reconnaissance and outpost ships, as well as high-speed freighters and light transport ships.

On the other hand, the caravela redonda or cross-sailing caravel was created. Built as a three- and even four-masters, it only had square sails on foresail or on foresail and main mast , and latin sails on the other masts. The term redonda means round and is explained by the appearance of the ship with wind-filled square sails. At the end of the 16th century, cross-sailing caravels achieved a load capacity of up to 200 toneladas (approx. 158.5 t), were built larger and more robust than the traditional caravels, well equipped with artillery and achieved considerable firepower. Some of these ships already had two decks and an aft barn with 2½ decks. The caravela redonda was more oriented towards the Nao than the Latin caravel. The consequent continuation of this path in shipbuilding with a focus on payload and combat strength then led to the galleon .

The cross-sailing caravel was used as an armed transport and warship until the 18th century. The Portuguese used it as an escort on the Brazil and India route and to protect shipping traffic with the Atlantic islands, it was used to monitor the Strait of Gibraltar , but also to protect the coast and fight pirates. Caravelas redondas belonged to the Portuguese Indian Squadron and took part in the conquest of Malacca in 1511 under Afonso de Albuquerque . Due to its characteristics as a combat ship, the cross-sailing caravel was also known as the caravela armada .

The Latin sailing caravels São Cristóvão (flagship) and São Pantaleão were involved in the first circumnavigation of the southern tip of Africa under Bartolomeu Dias (1487/88) .

When Vasco da Gama discovered the sea route to India (1498/99) he had the three caravels - named after the three archangels - São Gabriel , São Rafael and São Miguel . The São Rafael had to be abandoned on the return voyage because the death of numerous seafarers meant that there was no longer enough crew available for three ships.

The caravels of Christopher Columbus' first voyage to America (1492) are well known : Niña and Pinta . A caravel wreck found off the coast of Panama offers the opportunity to obtain precise information about this type of ship. The wreck is probably the wreck of the Vizcaína , which Columbus had to give up on his fourth voyage due to worm damage .