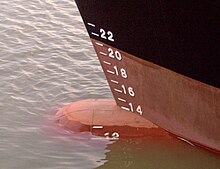 Draft marks ( Ahming ) on a ship's bow, in feet

The draft is the distance from the waterline to the deepest point of a ship.

In dinghies and sword boats , the maximum draft is determined by the lowest point of the fully extended sword . Depending on the position of the sword, which is also used to trim the boat, the draft can vary. For larger ships and keelboats with fixed keel, without adjustment options, the draft depends solely on the state of charge and the density of the water. In many seagoing ships, there are not only loading marks for fresh and salt water, but mostly differentiated according to different waters on the hull.

The freeboard draft indicates the maximum permissible draft according to the freeboard mark when fully unloaded.

The draft of a boat is important because it basically determines the depth of the water a ship can travel to without touching the ground. However, since ships can submerge beyond the draft due to their sailing behavior and external influences, the diving depth or the unloading depth is decisive for the design of waterways .

On older nautical charts, depths are still given in fathom ("thread"): 1 fathom = 6 feet = 1.83 m. On newer nautical charts the depth is given in meters . However, there are areas of which no maps exist except those of the Army Map Service . The Army Map Service , one of the major cartographic institutions, is a division of the United States Army Corps of Engineers and continues to use the fathom unit . This means that the specification in fathom remains widespread.