This article looks at the rudder as part of ships, aircraft, and airships; for further meanings, see rudder (disambiguation) . 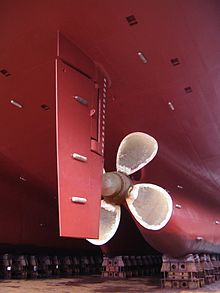 The rudder of a modern freighter, arranged directly behind the propeller, has three sacrificial anodes

General language, the term "rudder" is also for locomotion rudder ( belt or skulls a) rowing boat used. In technical terms, however, a rudder always means a rudder. Operating a belt or scull to move a float is also called “rowing” correctly in technical terms. Operating a rudder, on the other hand, is called “steering” or “rowing”.

Helmsman on a sailing training ship (1951) 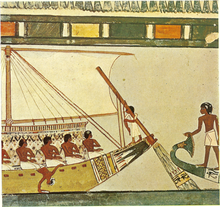 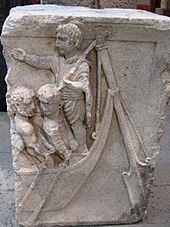 The somewhat confusing usage of the language stems from the fact that the conceptual distinction between oars and oars is relatively new. Originally, the rudder, also called gubernaculum ("guiding device ") or clavus ("nail") in Latin, was simply a particularly large belt attached to the stern or elsewhere on the ship's wall, and the other belts used for locomotion (lat. remus ), which in principle had the same shape as the rudder used for steering, were not differentiated linguistically. Therefore, “rudder” can still be understood as a collective term for rudder and propulsion rudder (belt) in common usage.

Helmsman is an older term still in use for the officer in charge of a ship's navigational watch . The helmsman, on the other hand, actually controls the ship, usually according to the specifications of the responsible nautical officer (e.g. entries in nautical charts or rudder commands ). The helmsman is always the person who is at the helm at a given point in time, regardless of whether they hold the rank or function of a helmsman. In recreational boating, however, the “helmsman” refers to the helmsman. Neither in commercial shipping nor in recreational shipping is the helmsman necessarily the skipper or captain.

The ships in antiquity mostly had two rudders, which were attached aft on each side, the later Viking longships one side rudder. In contrast, the Hanseatic cogs in the Middle Ages had a stern rudder. The first evidence from this period is a wall drawing from the 13th century in the church of Fide (Gotland). The tiller of this rudder, which is much larger there, was moved with the Kolderstock serving as an additional lever . The rudder is still known today in the Steinhuder Torfkahn .

A central stern rudder was already found on the river ships of the Egyptians and Romans . The oldest ship found with a stern rudder is the Bremen Schlachte ship from 1100. Later types of ships then had cable gears that moved the rudder from the steering wheel .

Since the rudder for right-handed operation with a forward view was usually attached to the right-hand side in early sailing ships, the nautical designation starboard resulted for this . 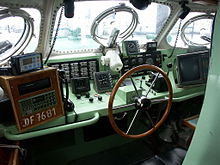 Steering wheel in a steering position

In the case of steering systems of today's modern sea vessels, the desired is the compass heading at the control stand on the bridge in the autopilot input, which operates the rudder. The course of the ship is now permanently compared with the compass position and the rudder blade is adjusted accordingly. This process takes place continuously, so that the steering system is one of the most heavily used devices on a ship. The traditional large steering wheel is only needed for maneuvering if it has not also been replaced by a joystick. A rudder position indicator on the ship's navigating bridge always shows the position of the rudder blade.

There are different types of rudder drives: The so-called rudder quadrant, where the rudder drive is done mechanically via a worm gear , and hydraulic steering machines . The latter work either with exposed hydraulic rams or as so-called rotary vane systems. If the on-board electrical system fails, every steering system can be operated with an emergency setting or an emergency power supply.

The steering wheel transmits the rudder commands by means of a rope or a chain to the rudder quadrant that moves the rudder. 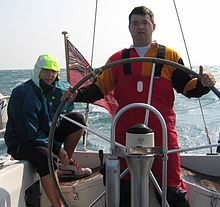 Steering wheel of a sailing ship. The mark with which the neutral position of the rudder can be identified is clearly recognizable

Even today, the oar is moved directly with a tiller on boats used in recreational shipping or small fishing boats . The helmsman perceives the forces at the helm more directly. The mechanics of a pure tiller steering is significantly simpler and takes up less space than steering using the steering wheel. The turning movement on the ship's wheel is transmitted to the rudder quadrant (tiller) via ropes or chains and pulleys. The rudder blade is attached directly to the axis of the rudder quadrant (the rudder shaft). The control cables are routed in such a way that turning the wheel to the left (counter-clockwise) changes the course of the boat to port. Boats equipped with a wheel control carry an emergency tiller that can be placed directly on the rudder shaft in the event that the mechanics fail, for example due to a break in the control cables. Double-wheel systems are common on larger sailing boats, with both wheels being mechanically coupled. Because both wheels move synchronously, the helmsman can always steer to windward. In contrast to motor boats, whose steering wheels are similar to those of cars and are predominantly supported hydraulically, the wheels of sailing yachts are still very similar to the historical sailing ship wheels with their large diameters, because servomotors to support the forces are not common due to the power requirement. Autopilots are also not available as standard. Cruising sailors often use mechanical wind vane controls because they do not require electrical energy.

The steering wheel of a sailing ship is not provided with a return spring that automatically moves the rudder back to the center position when the wheel is released. The rudder is required to compensate for the construction- related windwardness of the boat and is therefore not necessarily centered when the boat is going straight ahead. Depending on the shape of the rudder and the balancing (position of the pivot point in relation to the length of the rudder blade), the rudder will go into a stop quite quickly when you let go of the wheel or the tiller and the boat will thus drive an uncontrolled curve. The wheels, on the other hand, are often provided with a locking screw that holds the rudder in its position once the boat is properly trimmed and can keep the ship on course even without an autopilot - provided the wind is constant and the sea is relatively flat.

Since the rudder angle cannot be viewed on its own, the center position is usually marked in color for easier orientation or the ship is provided with a rudder angle indicator.

Types of oars and their parts

The table shows some of the common shapes for ship rudders.

A transverse thruster (literally not a rudder) is a device used for better maneuvering to move the forward or rear end of the ship to the side.

Space axes and rudders of an airplane 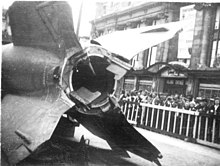 Four thrusters behind the rocket motor of an A4 rocket

In the case of aircraft , too, the control systems are referred to as rudders . The movable rudders together with the rigid fins form the tail unit for flight control of the aircraft:

Within the earth's atmosphere, the same rudder principle can be used for rockets as for airplanes; in addition, guide surfaces in the exhaust jet can exert corresponding lateral steering forces by deflecting the exhaust jet.