This article describes the physical behavior of liquids. For the meaning in biology, see cavitation (biology) .

Cavitation ( Latin: cavitare "to hollow out") is the formation and dissolution of steam-filled cavities (steam bubbles ) in liquids . A distinction is made between two borderline cases, between which there are many transitional forms:

The cavitation number describes the tendency of a liquid to cavitate.

The most common causes of cavitation are fast moving objects in a fluid , e.g. B. the impellers of centrifugal pumps , water turbines or propellers . According to Bernoulli's law , the higher the speed , the lower the static pressure of a liquid . If the static pressure falls below the evaporation pressure of the liquid, vapor bubbles form. These are then usually carried away with the flowing liquid into areas of higher pressure. When the static pressure rises again above the steam pressure, the steam suddenly condenses in the cavities and the steam bubbles collapse. Extreme pressure and temperature peaks occur.

The cause of cavitation, especially in centrifugal pumps, is the local pressure drop in the blade channel inlet of the impeller. They are inevitably connected with the flow around the blade leading edges and the transfer of energy from the impeller blades to the fluid to be pumped. Cavitation can also occur at other points on the pump where the pressure drops locally, for example at the leading edges of stator blades, housing tongues, split rings, etc.

Other causes are either the rise in the temperature of the pumped liquid, the drop in pressure on the inlet side of the pump, a geodetic suction height that is too high or the decrease in the inlet height.

Strong pressure fluctuations that trigger cavitation can also be generated by ultrasound . Cavitation occurs in the pressure minima of the oscillation.

The phenomenon of vapor bubbles, which arise when liquids boil and sometimes collapse again, is not cavitation, because it is not triggered by pressure fluctuations but by temperature changes.

Formation and implosion of cavitation bubbles

When the water evaporates, bubbles form because the water vapor at 20 ° C requires a space that is many times larger than that of liquid water. If the water pressure rises again, the evaporation process stops again, the water vapor created in the cavitation bubble condenses on the outer wall of the steam bubble, and the steam bubbles that have already formed collapse suddenly. The previously required space suddenly becomes smaller, the water has to fill this space again and flows back like an implosion , which results in very strong - albeit brief - pressure surges in the water , which can be several 100  MPa (1 MPa = 10  bar  = 1 N / mm²). This process creates pressure waves with high pressure peaks.

If the vapor bubbles are near or directly on a solid wall, e.g. B. the impeller blades, the implosion creates a jet of liquid (microjet) that hits the wall or impeller blade at high speed. These are highly stressed by the sudden pressure load; therefore the crater-shaped material erosion stirs when cavitation occurs. 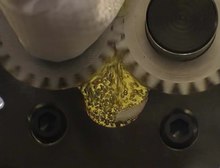 If cavitation occurs on the surface of solid bodies (such as a ship's propeller ), so-called cavitation corrosion may occur. The surface material is deformed in microscopic parts due to the high mechanical loads. After a while, larger particles break out of the surface. The mechanism of this damage is briefly described in the previous section "Formation and implosion of cavitation bubbles".

Cavitation is usually undesirable in hydraulics . On the one hand, it reduces the efficiency , and on the other hand, it can lead to damage, because when the cavities are imploded, extremely high accelerations , temperatures and pressures occur briefly , which can damage the material. To prevent cavitation in pumps , make sure that the temperature of the liquid in the pump is not too high and that the suction pressure of the pump is not too low. High temperatures arise when the pump is running without any liquid being drawn off. In this case, the liquid should be pumped in a circuit (e.g. in a backwash line) or the pump should be switched off. Cavitation damage occurs, for example, with centrifugal fire pumps if the pump is only switched on to maintain the pressure in the line and no extinguishing water is drawn off. In the case of liquid ring vacuum pumps , the ratio of pressure and temperature in the pump chamber must not fall below a design-dependent value in order to avoid damage.

In rocket technology, cavitation leads to irregular combustion and damage to centrifugal pumps driven by gas turbines . In rockets, these pumps have to deliver large amounts of fuel at high pressure and are therefore particularly prone to cavitation. Cavitation is reduced by putting the entire fuel tank under (very little) overpressure and maintaining this overpressure by adding pressurized gas while the tank is emptying.

In military surface ships, low cavitation screws and systems for noise reduction are also used, e.g. B. the prairie masker system on US ships.

With sonography in medical diagnostics, there is a risk that strong energies (especially the negative peak pressures of the ultrasound) will cause cavitation within the body. This could have harmful thermal or mechanical effects. For example, the generation of free radicals or shock waves could destroy tissue parts. Some possible effects have already been observed in animal experiments in vivo . It is also believed that contrast agents increase the likelihood of cavitation occurring.

Research by the Israel Institute of Technology shows that the maximum speed at which dolphins swim is limited by the cavitation effect . The pain in the caudal fins above a certain speed is the limiting factor. Some fish, such as tuna , do not have pain receptors in their caudal fin. They therefore advance into speed ranges in which cavitation effects arise.

Popcocks are able to create a cavitation bubble by closing their claws extremely quickly. The bang that occurs when the bladder collapses is, on the one hand, eponymous for these animals; on the other hand, the energy released can be sufficient to stun or kill prey.