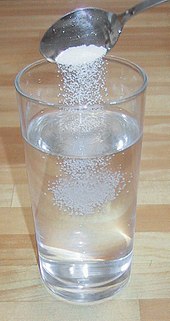 In chemistry, solution describes a homogeneous mixture of at least two chemical substances . Dissolving is a physical process. A solution consists of at least one dissolved solid, liquid or gaseous substance (solvate) and the usually liquid or solid solvent (solvent) which makes up the majority of the solution , which in turn can be a solution.

Solutions are not externally recognizable as such because they only form a homogeneous phase : The dissolved substances are homogeneously and statistically distributed in the solvent as molecules, atoms or ions. You are e.g. B. with special filtration methods such as nanofiltration and reverse osmosis , separable.

The properties of a solution are equally dependent on the dissolved substances and the solvent. Most of the properties change depending on the concentration of the dissolved substance. This applies e.g. B. for the color intensity of solutions of colored substances ( Lambert-Beer law ), for the viscosity, for the electrical conductivity of ion solutions or for the refractive index . Therefore, such properties can be used analytically to measure the concentration and to obtain content information. In the case of aqueous solutions of salts, the phenomenon of ion association must always be observed. This is all the more true for solvents with lower dielectric constants than water, since the electrostatic interaction is stronger there.

Colligative properties of solutions are properties whose changes depend only on the number of dissolved particles, not on their chemical properties. These include lowering the vapor pressure and solidification temperature as well as increasing the boiling temperature (with increasing number of dissolved particles). A distinction is made between ideal and real solutions. Ideal solutions obey e.g. B. Raoult's laws on the lowering of the molar melting point or the increase in the molar boiling point . Real solutions only follow these linear laws exactly with "infinite dilution" and show a saturation effect at higher concentrations. It is similar with the other properties of solutions mentioned above.

The properties of solutions can be classified as follows from a physical point of view:

Solutions with solid solvents are usually referred to as mixed crystals or, if they have metallic properties, as homogeneous alloys .

The dissolved substances can be:

Not all solutions have a limited solubility, so ethanol and water can be dissolved in each other in any ratio.

In the case of solutions of gases in liquids, a solution is considered saturated when a diffusion equilibrium is established between the gas molecules going into solution and those leaving the solution. However, gas bubbles only emerge from oversaturated gas solutions (as in mineral water or sparkling wine) if the sum of the solution partial pressures of all dissolved gases is greater than the mechanical pressure at the location of the bubble formation. There is no definite limit to the absorption capacity of a liquid for a gas. The “solubility” here is rather the coefficient that relates the amount dissolved to the gas pressure used.

In fact, when salts are dissolved, the ionic bonds of the crystal are broken, and water molecules form hydration shells around the ions ( hydration ). Many metal ions even form quite stable complex cations with the water molecules , e.g. B. Hexaqua Iron (III). The linkages mentioned must be completely reversible if a substance mixture is to be regarded as a solution.

A reaction also occurs when gaseous acid or base anhydrides are dissolved. Hydrogen chloride dissolves and immediately dissociates almost completely into chloride ions and hydrogen ions, which in turn combine immediately with water to form oxonium . In contrast, most of the carbon dioxide remains dissolved as a gas. A small part, however, forms carbonic acid with the water , which in turn dissociates into hydrogen carbonate , carbonate and oxonium. These reactions are also completely reversible; H. the solutions can be separated again without additional reagents.

Separation of solids from liquids

Evaporation of the liquid solvent causes the solution to gradually become supersaturated and the solid to crystallize out, provided it is a solution of a substance with limited solubility. When the evaporation is complete, the solid remains as a sediment at the end .

There are solutions of "solids" such as B. calcium hydrogen carbonate , which disintegrate when the solution is thickened and therefore do not even exist as dry matter. In this example a residue of calcium carbonate is created while carbon dioxide evaporates with the water.

Reverse osmosis is a technology that is increasingly being used . The solution is pressed through a semi-permeable membrane that prevents ions and larger molecules from passing through. This technology is mainly used for water treatment and especially for seawater desalination .

Liquids can (largely) be separated by fractional distillation . The different boiling points of the substances involved are used. But since the more volatile substance also has a lower vapor pressure of the higher-boiling liquid when it is boiling, a small proportion of it is always transferred with it. Alcohol can only be obtained up to approx. 96% purity by distillation. Such a mixture is called an azeotrope .

Separation of gas and liquids

Heating the solution causes the gas to escape because its solubility decreases with increasing temperature. A dissolved gas can only be completely expelled from the solution by boiling the liquid, because then the vapor pressure reaches the mechanical pressure and forms bubbles with which the gas is completely expelled. The partial pressure of the solvent in these bubbles is then 100% of the pressure in the bubbles.

Gases can also "displace" one another from the solution. To do this, the solution of any gas A must be brought into contact with any gas B, e.g. B. by bubbling. A diffusion process then occurs between the bubbles of gas B and the solution of gas A, in which necessarily more and more B goes into solution and more and more A leaves the solution. The “displacement” has nothing to do with different solubility. One speaks more appropriately of a stripping . The boiling out of a gas from its solution is in principle also such a stripping process.

Metal melts are also mostly solutions and are referred to as alloys . Several metals or non-metals are dissolved in one main component; For example, some steel melts consist of a solution of chromium , vanadium and carbon in iron . Alloys are also counted among the " homogeneous mixtures ".

Since glasses are supercooled mixtures of liquids, they can also be viewed as solutions.

The dissolution of a metal in an acid is not a dissolution process in the strict sense, as a chemical reaction occurs.

But there are also borderline cases in which a reversible chemical reaction and a dissolution process take place at the same time. Examples are:

In geology, a distinction is also made between the weathering processes of the congruent and incongruent solution. One speaks of a congruent solution when the rock is uniformly and thus completely dissolved, for example when halite or limestone is weathered in solution , the latter being accompanied by the setting of a reversible dissociation system of the carbonic acid (see above). In contrast, one speaks of an incongruent solution in the case of a selective solution of individual minerals or ions from the rock, for example in the course of silicate weathering .

Classification in the scheme of chemical substances