The title of this article is ambiguous. Further meanings are listed under pepper (disambiguation) .

The pepper bush ( Piper nigrum ), also known as black pepper or pepper for short , is a type of plant from the pepper family (Piperaceae). The fruits, also known as pepper or peppercorns , are used as a hot-tasting spice because of the alkaloid piperine they contain . To distinguish it from similar spices, one also speaks of real pepper .

Black pepper fruits are not always black. Depending on the time of harvest and further treatment, the peppercorns have different colors: green pepper, black pepper, white pepper, red pepper.

A pepper plant on a tree in Tamil Nadu

Illustration from 1832 by Piper nigrum 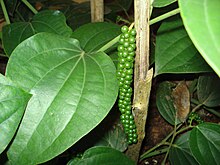 Hanging fruits of a pepper plant in Kerala

Longitudinal section through the fruit of the pepper

The pepper plant is a perennial, woody climbing plant that grows up on trees and can reach a height of around ten meters. In culture, the plant is usually kept at a height of 3 to 4 meters. The simple, alternate, bald, pointed to pointed, stalked, leathery leaves are ovoid to heart-shaped and have entire margins. The petiole is up to 5 centimeters long, the glandular leaves 10-20 centimeters below. The veins are palmate, with the main arteries arching forward.

The pepper plant is protogynous , i.e. female. The small, inconspicuous flowers without an inflorescence are in multi-flowered, dense, about 10-15 centimeters long, hanging and opposite-leaf spikes with 50 to 150 individual flowers, which in cultivated pepper, unlike wild varieties, for the most part (up to 90%) are hermaphroditic . The flowers are each on a wrapper . The spherical, unilocular ovary is upper constant with small, seated scars branches . There are 2–4 short stamens .

After fertilization , ripe, small, spherical, red, single-seeded fruits ( stone fruit ) , up to 5–6 millimeters in size, develop in typically 8 to 9 months . Pepper can be harvested from a pepper plant twice a year; the plants remain productive for up to 30 years.

The original home of this plant is India , especially the Malabar Coast , which became wealthy in connection with the Indian trade . In the course of the spread of Indian culture to Southeast Asia , pepper cultivation came to today's Indonesia and Malaysia around 1000 years ago .

The largest pepper growing countries are Vietnam , Indonesia , India , Brazil and Malaysia . According to various sources, between 200,000 and 360,000 tons of pepper are produced worldwide every year, although there are strong annual fluctuations. The value of a total annual world production of pepper is estimated at 300 to 600 million US dollars.

Today pepper is mainly important as a spice . 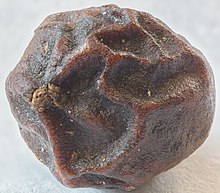 Green pepper is made from unripe, early harvested fruits. It differs from black pepper in that it is either freshly placed in salt water or dried quickly and at high temperatures or freeze-dried . Therefore it retains its original green color. Fresh green pepper is now widely available through air freight .

Black pepper is also obtained from unripe, not yet yellow-orange, still green fruits, wrinkled and blackened fruits of Piper nigrum through drying .

White pepper is just the stone core of fully ripe pepper. For its production, the ripe red pepper berries are soaked in water for about eight days or fermented covered for about three days, so that the pulp comes off. Then they are peeled mechanically; then only the stone core is left, this is then dried and partially bleached in the sun. The long soaking process can be shortened by treatment with pectinases .

However, black pepper or the not yet fully ripe fruits can also be peeled. They can then be treated accordingly so that you get a similar white pepper.

Red pepper consists of completely ripe, unpeeled pepper fruits and is usually placed in salty or sour sheets, similar to green pepper . Compared to the green pepper, the pickled red pepper is rarely available. It is even more rare to find real red pepper in dried form.

Pepper is sometimes sold under names that indicate the origin and gradual differences in taste, but are also used for advertising. Borneo pepper or Sarawak pepper indicate an origin in the Malaysian state of Sarawak in the north of Borneo . Lampong pepper comes from the Indonesian island of Sumatra (see the Province of Lampung in Sumatra).

The first ancient mention of pepper is documented by Hippocrates . Before it became common to ship goods from Asia to Europe, pepper had to be transported overland to Europe from what was then the only important cultivation area in southwest India. Its durability and sharpness made it the ideal long-distance trade good . Pepper already dominated the spice trade between Asia and Europe in ancient times ( India trade ). It was transported to the Mediterranean and the Roman Empire by caravans and by sea through the Red Sea . The Bremer Pfefferkorn from the beginning of the 13th century is the oldest preserved find as a condiment north of the Alps.

Pepper was a precious commodity and was at times outweighed by gold . Merchants who owed their wealth to pepper, among other things, were called pepper sacks . Pepper was a luxury item, but its importance was mainly due to the fact that it was used to preserve food for a long time.

In addition, pepper (medieval pharmacy differentiated the "types" pepper and white pepper as well as long pepper ) was also used as a remedy in various medicinal forms, for example as three-pepper latwerge ("dia-trion pipereon").

In the Middle Ages , the Turks and Arabs , later Venice , had the monopoly on the spice trade with India and eagerly watched over it. The precious spices were one reason why Marco Polo tried to set up his own European caravan operation to Asia. At the end of the 15th century, the “sea route to India” was opened up by Portuguese sailors and then used by the Portuguese India Armadas . It ushered in (along with the discovery of America ) the Age of Discovery . In 1498 Vasco da Gama succeeded for the first time in bringing a cargo of pepper from India to Europe by sea. Pepper lost part of its importance as a commercial commodity in Asia after the discovery of America, when the chili (hot paprika) from there displaced it from its role as an important hot spice in many Asian dishes.

From the high to late Middle Ages, pepper was also grown in Southeast Asia - initially in Thailand, later mainly in Indonesia ("Spice Islands"). From there mainly the Chinese and domestic markets were served. It was not until the 17th century that pepper came to Europe from there in significant quantities, initially through Dutch trading companies. The Southeast Asian spice trade played a role in various armed conflicts, especially between the Netherlands and other European sea powers.

With the saying “Go where the pepper grows!” You wish someone you can't get along with to move to a very distant area, so that you will no longer meet them in the foreseeable future. - Another explanation relates the phrase to the penal colonies in French Guiana (capital: Cayenne ). The country was also known for growing pepper. The saying “go where the pepper grows” would therefore wish the interlocutor to go to this penal colony. The most prominent prisoner in French Guiana was Alfred Dreyfus , who was imprisoned on Devil's Island (Île du Diable) from 1895 to 1899 .

Decisive for the spiciness of the pepper are the alkaloid piperine (5–8%) and derivatives of piperine such as piperettine , piperyline , piperanine , chavicine (an isomeric compound of piperine) and others, depending on the type of pepper, in varying compositions, which are also known as alkamides ( Acid amide alkaloids). Piperine is obtained in the form of yellow crystals via crystallization from an alcoholic pepper extract. It was first isolated by Ørsted in 1819 .

White pepper contains around 2.5 percent essential oil , so-called pepper oil, and green and black pepper contain up to 4.8 percent of it, which gives the pepper its aroma. The pepper oil is obtained by steam distillation of pepper. In essential oil, the main components are monoterpenes , such as pinene , 3-carene , terpinene , terpinolene and limonene , as well as sesquiterpene , such as α- and β-caryophyllene and β-farnese . Oxidized terpenes such as terpinen-4-ol are also found in pepper oil .

The so-called pepper resin is obtained after the piperine has been separated off via crystallization and the terpenes via steam distillation. It contains substances that are grouped under the collective term piperoleine. They are similar to piperine, but have longer hydrocarbon chains with a double bond and tend to gum up .

Other important components in black pepper are around 50 percent starch , 5 to 6 percent fatty oil and the flavonoids (and glycosides of) kaempferol , rhamnetin and quercetin .

Black pepper as a medicinal plant

The fully grown, but still green, unpeeled and dried fruits are used as medicinal drugs. After being treated with boiling water, they are dried in the heat and become dark in the process.

Application: The pungent, burning taste of pepper comes from the excitation of heat and pain receptors . The secretion of saliva and gastric juice is stimulated by reflection, as is the secretion of digestive enzymes. Pepper therefore has a clearly appetizing and digestive effect, which is hardly used in medicinal products except in tonics in Europe.

From the genus Piper (pepper)

Long pepper consists of the dried, unripe catkins of Piper longum , another species of the pepper genus ( Piper ). The Latin word piper (and from it the German word pepper via Middle High German phëffer ) comes from the Indian word for this long pepper: pippali .

Voatsiperifery pepper ( Piper borbonense ) is a pepper from Madagascar that is rarely available in specialty shops and has a strongly aromatic taste. It is characterized by its brown to black color and the typical stem approach of the oval berries. Since it comes from wild collections and the climbing plant only bears fruit from 10 to 20 meters high, the annual harvest is very small and its price is rather high.

The cubeb pepper ( Piper cubeba ) only plays a role in North African cuisine today , but was quite popular in Europe in the 15th and 16th centuries.

From the genus Capsicum (paprika)

Spanish pepper ( Capsicum annuum ) belongs to the genus Paprika ( Capsicum ). Very different varieties have been bred from this type of plant: on the one hand sweet peppers, on the other hand varieties with hot and very hot fruits. Cayenne pepper consists of the ground pods, whereby the hot variety Cayenne is preferred .

In the spice museum in Hamburg a pepper substitute from the time of the Second World War is exhibited, which contains paprika: 50 kg oat shell flour, 50 kg acc. Dill straw, 40 kg paprika fruit stem powder and 1/2 kg celery oil were mixed for this.

The Guinea pepper (or Melegueta pepper ) comes from West Africa (see also Pepper Coast ). These are the dried seeds of Aframomum melegueta , a type of plant that belongs to the ginger family. They are also known as the grains of paradise .

Allspice ( Pimenta dioica ) is also known under the names clove pepper or Jamaican pepper . It belongs to the myrtle family .