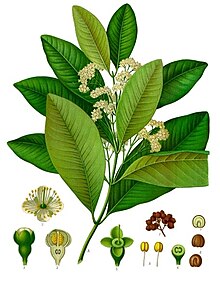 Allspice ( Pimenta dioica , syn .: Pimenta officinalis ), also known as spice grains or clove pepper, refers to a type of plant from the myrtle family (Myrtaceae) and at the same time the spice obtained from this plant . It comes from Central America and the Caribbean .

Other names for the spice are Jamaica pepper and new spice (because of its origin from the New World ), also outdated fashion spice . The rich taste is reminiscent of several other spices at the same time: pepper , cinnamon , nutmeg and cloves . That is why allspice is also known as four-spice or all-spice (English allspice ).

The name allspice came about because early Spanish explorers initially confused the fruits with the fruits of pepper ( Piper nigrum ) because of their similarity in shape and taste . They called the fruits pimienta (pepper), this was later adulterated and anglicized to pimento .

Pimenta dioica is an evergreen tree that grows up to 10–12 meters or sometimes higher. The trunk diameter reaches about 30-40 centimeters. The light grayish to grayish bark is flaky.

The opposite and short-stalked leaves are simple and thin-leather. The short petiole is up to 1.5 inches long. The entire, (narrow) egg-shaped to obovate or lanceolate, rounded to rounded-pointed leaves are up to 15 centimeters long and up to 6 centimeters wide. They are covered with transparent glands.

This species is dioecious separately sexed ( diocesan ), as the botanical name indicates. The flowers stand together in axillary and paniculate inflorescences with zymous partial inflorescences . The small, white, functionally unisexual, fragrant and stalked flower with a double flower envelope has a diameter of about 0.8 cm. The flowers of the male and female plants are very similar and can hardly be distinguished before flowering. There are many free stamens or half as many staminodes with antherodes and 4 early falling petals and 4 small sepals. The two-chamber ovary or Pistillode is inferior with a relatively short stylus .

A mostly two-seeded, spherical and purple-red to blackish berry ( false fruit ) with small calyx remains is formed, which has a diameter of 0.5 to 0.8 cm. The fruit is harvested half-ripe, still green, as it loses its aroma when fully ripe.

Allspice leaves are offered as a spice in the Caribbean

The unripe fruits , which contain essential oils, are used. The main component of the oil is eugenol , which can also be found in the clove ( Syzygium aromaticum ). Allspice tastes noticeably hotter than cloves, however.

The aromatic smelling allspice (from Latin pimentum / pigmentum , "balm, spice, spice, medicinal drug") was discovered for European cuisine in the Antilles by Christopher Columbus , who also gave it its name. To date, the main growing area is Jamaica , from where around two thirds of the world's harvest come.

Allspice is generally very popular in Caribbean cuisine, where in addition to the fruit, the fresh leaves and the aromatic wood (for grilling) are used. In Germany, allspice is mainly used in sausage production and in Christmas bakery.

The allspice oil is obtained from the fruits of Pimenta dioica by means of steam distillation. Its balsamic, spicy and peppery scent is reminiscent of clove oil and is often used in spicy men's perfumes . The ingredients consist of 60 to 80% phenols , sesquiterpenes , methyleugenol and oxides. Due to the phenols, the essential oil is very irritating to the skin and mucous membranes. Since methyl eugenol is also carcinogenic (carcinogenic) in animal studies , the essential oil should no longer be used.

Oil is also distilled from the leaves; it is slightly different from the oil from the fruits. The oil is used industrially.

The wood is hard and heavy and quite durable.