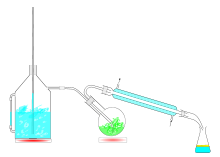 Steam distillation: left the steam generator, in the middle the starting product, right the distillate

In carrier steam distillation, a lower-boiling component is usually introduced into the solvent, the partial pressure of which is added to the partial pressure of the higher-boiling component, so that the mixture tends to boil. At the boiling point of the low-boiling component, the particles of the higher-boiling component are carried away. In this way a lowering of the boiling point can be brought about. This lowering of the boiling point allows solvents to be distilled more gently or sensitive substances to be concentrated more gently (see also vacuum distillation ). Water vapor and the more volatile components of the sample evaporate and reach the cooler in gaseous form, where they condense into a liquid. If the substance to be cleaned is only slightly soluble in water, it separates in the distillate as the second phase and can be separated off by decanting and / or extraction. Not all water-insoluble substances can be distilled in this way. Substances that can be distilled in this way are called steam volatile. The boiling point of the heterogeneous mixture is always below 100 ° C. The reason for this is that the total vapor pressure of the mixtures that cannot be dissolved in one another results from the sum of the partial pressures of the components, regardless of their mole fraction. As a result, the total vapor pressure is always above the vapor pressure of the water, which makes it boil at 1013 mbar at 100 ° C, so the boiling temperature must always be below 100 ° C. Therefore, sensitive natural substances with very low vapor pressure can also be distilled using this method.

To determine the nitrogen content, the ammonia produced in the Kjeldahl analysis is dragged out of the digested sample with water vapor and introduced into an acid. The acid is introduced in excess and the excess is then determined by back titration .

With conventional steam distillation, a large amount of steam is required and the actual distillate must first be separated from this water. The process can be improved by a collection and reflux system: The sample to be distilled, e.g. B. plant parts, is in a round bottom flask with distilled water . In a second there is an organic solvent that dissolves the desired substance, e.g. B. dichloromethane . Both round-bottom flasks are connected to each other via a glass tube system, the shape of which is reminiscent of a trident, with the round-bottom flasks at the respective outer tip. The central tube is closed at the bottom. From the lower part of the central tube there is a narrow reflux tube to the tube to which the round bottom flask with the solvent is connected. This reflux ends a little below the level of the water pipe. All three large pipes come together at the top and a Liebig cooler is placed there. The distillate, which is separated into two phases, the aqueous and the organic, collects in the central tube during operation. The solvent must have a higher density than water so that it collects at the bottom and finally arrives back in the solvent flask via the reflux.

When this distillation is complete, the remaining distillate is added from the central flask to the solvent flask. This is followed by phase separation using a separating funnel . The organic phase is then dried over sodium sulfate or magnesium sulfate and filtered. The organic solvent can now be evaporated and the desired mixture of natural substances is obtained.

Representation of a steam distillation