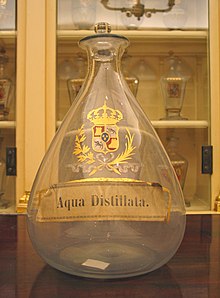 Container for distilled water in the Real Farmacia in Madrid

Distilled water (also Latin aqua distillata ) is water (H 2 O) that has been freed from the ions , trace elements and other impurities found in normal spring water or tap water by distillation . In medicine , pharmacy , chemistry and biology it is used, among other things, as a solvent and also as a cleaning agent. In the European Pharmacopoeia it is called aqua purificata (often abbreviated as aqua purif. ).

Originally, "plant water" produced by distilling plant parts or a medicinal drug was called aqua destillata . In the sense of chemically pure water, the Latin name was only used in modern times.

Distilled water is obtained by distillation ( evaporation and subsequent condensation ) from tap water or from pre-purified water.

Distilled water is largely free of salts ( anions and cations ), organic substances and microorganisms . The freedom from ions is checked by measuring the electrical conductivity , the value of which should be between 0.5 and 5 µS / cm at 25 ° C. Because of the autoprotolysis, there are H 3 O + and OH - ions in it, but because of their very low concentration they only conduct electricity to a very small extent. However, it may still contain small amounts of volatile compounds that have no influence on the conductivity. The pH value drops rapidly from around 7 to a value around 4.5–5 when air is exposed to the reaction with the carbon dioxide contained in the air.

If particularly pure water is required, a single-stage distillation is not sufficient. There is twice distilled (double distilled) water ( aqua bidestillata , abbreviated also aqua bidest or also Bidestillatus ) and triple distilled water ( aqua tridestillata ). Since small traces of silica dissolve from glass vessels when they are boiled and contaminate the water, the distillate is distilled and stored in quartz or platinum vessels from the second pass .

Effect on the body

There are no acute health risks to be feared when drinking distilled water in normal quantities. However, in the event of extremely excessive consumption, there is a risk of water poisoning , which is also present with normal water . However, the exclusive use of distilled water combined with an unbalanced diet can lead to a depletion of the body with electrolytes .

In some areas of the world (e.g. Southeast Asia), distilled water is industrially bottled, sold and preferred by many people as particularly “pure” drinking water .

Michael Fromm from the Charité believes that the maximum amount of distilled water you can drink over several days is relative:

“The kidneys can dilute the urine to a maximum of 50  mOsmol / l, i.e. less than 25 mmol NaCl per liter urine excreted. The Na + concentration in the plasma can drop to around 120 mmol / l before symptoms appear, i.e. a reduction of 25 mmol / l. Cl - is comparatively unimportant. The volume of distribution for NaCl in the plasma plus interstitium is 25% of body weight, i.e. 17 liters at 70 kg. A person with healthy kidneys could theoretically drink a total of 17 liters of water without adding electrolytes.

If large quantities are consumed quickly, the transfer from the plasma to the interstitium does not keep pace and complications due to the drop in plasma concentrations can occur. Example from a study: 9 liters of water in 7 hours reduced the Na + concentration to 122 mmol / l. "

Distilled water is therefore only dangerous in large quantities and only if the resulting lack of electrolytes is not compensated for through food. Distilled water is an acute danger to the body - just like normal drinking water, however, if it gets directly into the blood , such as through an infusion . Then body cells can burst due to the osmosis process (see hemolysis and isotonicity ).

Water demineralized in another way

Distillation is expensive and environmentally unfavorable because of the energy required for it. For many purposes, therefore, demineralized water that is produced with less effort is mainly used instead of distilled water . It is through ion exchange demineralized and comes under the names distillate same water , demineralized water ( " v oll e ntsalzt"), deionized water , battery water or ironing water into the trade. These products are obtained by removing cations and anions with the help of ion exchange resins and differ from distilled water in that apolar or organic substances or impurities from the exchange resins may remain in the water. Sterility cannot be guaranteed either. Such products should therefore not be called distilled water .