Perfume is a redirect to this article. For further meanings, see perfume (disambiguation) .

A perfume [ parˈfyːm ] or parfum [ paʁˈfœ̃ ] ( French parfum , from Latin per fumum 'through smoke'; from the early use of incense) is a mostly liquid mixture of alcohol and odoriferous substances , which is supposed to produce pleasant smells . Perfumes are mainly used for the following purposes: 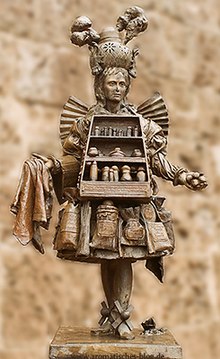 The history of perfume begins in the ancient civilizations of Egypt and India, whose craft tradition, spirituality and medicine made it possible to process the precious fragrances. The possible uses of aromatic substances were considered a source of inspiration - to inspire means to breathe in or breathe in. In Egypt, the golden age of the pharaoh Hatshepsut brought a turn to the living body. What was previously only sacrificed to the gods and given to the dead on their journey was used to perfume the living body.

“Heaven and earth should overflow with incense and the fragrance should be in the royal house. You are to offer them to me pure and flawless, so that ointment for the divine members may be squeezed out of them. "

The fragrance blends were made by the priests who specialized in handling resins, balms and ointments. The turn to the living body, which was seen as an expression of the aesthetic ideals of beauty of its time, represents a further step in the development of cosmetics and perfume. This expression of desired inner and outer harmony, which is found in the portrait bust of Nefertiti ( Egyptian nafteta "die Beauty ”) has been preserved, and the meaning of fragrance - means and medium of transcendence , according to the Egyptians an expression of life - has become an integral part of the purifying rituals of the cultural image.

The famous kyphi , a mixture of frankincense , styrax amber , cinnamon bark , opoponax , myrrh , calamus , galangal , benzoin , oud , sandalwood and rose petals, mixed with oils, wine and raisins, shows the effort involved in trading the raw materials sometimes had to be transported over long distances. The fragrant cosmetics, known as Kyphi to the Egyptians in Luxor five thousand years ago , were later adopted by the Arabs and used by the Romans . In India , the country of raw material sources for fragrances, in which many things grow from the Himalayas in the north to the Indian Ocean in the south, which are used for smoking rituals and perfumed ointments and oils, the fragrant plant components were used especially for medicinal purposes and to cleanse the body . With the Kama Sutra , both the art of a fulfilled love life and the handling of aromatic substances, the use of which every educated person should adopt, has been handed down. Fragrant creams for the body, perfumed wax on the lips and thoroughly brushed teeth, clothes and hair adorned with flowers. The prerequisite for this was the development of artisanal techniques with which the first forms of perfumed ointments were produced by soaking flowers and blossoms in oils and solid fats.

Occidental culture became familiar with the fragrant raw materials and mixtures of the Orient through the Crusades . Until then, lavender water was known, and Charlemagne (late 8th century) has an arrangement that regulates the cultivation of aromatic plants for use in medicine and cuisine. Fragrance was also understood as an expression of health. After Venice became an important trading center, large quantities of new herbs, spices and other goods came to Europe. After the craftsmanship and the technical prerequisites had developed so far that distillates of high concentration could be produced, the first essential oils came on the market in the 15th century. “Distilling is nothing more than separating the subtle from the coarse and the coarse from the subtle, making the frail or destructible indestructible, the material immaterial, the corporeal spiritual and the unsightly more beautiful,” wrote the doctor and alchemist Hieronymus Brunschwig around 1507 .

The emergence (revitalization) of perfumery is u. a. associated with the arrival of Catherine de Medici (1519–1589) at the court of Henry II . In 1580 the alchemist and pharmacist Francesco Tombarelli came to Grasse (France) and opened a laboratory for the production of fragrances, making Grasse the start-up center of the European perfume industry. A distinction was made, however, between common people and the upper class: "For the common man to put good myrrh in the mouth is not drawn". In 1709 Lemery made a classification in which he differentiated between a royal perfume and the perfume for the bourgeoisie . The latter is not supposed to have any aesthetic effect, just disinfect the air. According to this view, perfume also had a therapeutic effect, it invigorated the mind, strengthened the body and was considered a means of fighting the plague. Perfume delights the senses, purifies, protects and is at the same time a symbol of material prosperity. The assumption that harmful germs could infect the body while bathing promoted the massive use of scented water, which became an indispensable aid in the daily toilet that did without water as a cleaning agent - eau de toilette .

The basic components of a perfume are mainly alcohol (around 80%), distilled water and natural essences dissolved in it ( essential oils of vegetable or animal origin) as well as more and more synthetically produced fragrances. The technical term for natural oils and synthetic fragrances (chemicals) is " fragrances ". Most uniform fragrances are synthesized in larger quantities. When looking for new fragrances, progress depends - according to Ernest Beaux, composer of the well-known perfume Chanel No. 5 - first from the research of the chemist . Natural fragrances, depending on their thermal stability and disruptive accompanying substances, are obtained from the comminuted raw material by distillation , maceration , enfleurage , extraction or by pressing (expression).

The declaration has been made in the EU according to the INCI system since 2005 . In addition, the EU Directive 2004/93 / EC with the obligation to declare 26 allergens applies.

Depending on the concentration of fragrances within a mixture, a distinction is made between the following dilutions:

The proportion of fragrances has increased steadily since the 17th century from EdC to EdT to EdP . Extreme or Intense variants contain even more essential oils. When listing the concentration, however, it should always be taken into account that there are a large number of different views and descriptions, some of which differ significantly from one another. The above published information is the same as in the H&R book Parfum (see section Literature ). Martinetz / Hartwig, for example, write: eau de toilette from 5 to 8%, for eau de parfum from 8 to 10% and for (extrait) parfum from 10 to 25%.

A perfume can take on many different scent notes due to the different proportions of the basic components . For example, it can have floral, musky, oriental, fruity, fresh or classically elegant fragrance nuances.

Most perfumes are made up of top, heart and base notes.

The most important fragrance building blocks

The perfumery has always tried to classify, although not every note can and must be unequivocally determined. If the various fragrances are assigned to nine different fragrance families, an at least useful system is created. It can be argued in detail whether some of the categories mentioned are superfluous or complement each other sensibly. Gourmand aromas and tropical fragrances in particular are difficult to integrate into a classic division.

In addition, subdivisions can be found that list spices and herbs individually, that name aldehydic perfumes and even color assignments are possible; Green notes in particular are often mentioned as a separate group. An important and reputable source is the Sociéte francaise des parfumeurs , founded by Jean Kerléo in 1990 , where information on the fragrance families is also available.

Perfume as a fragrance is mainly used by both women and men to change the body's own odor in order to emphasize one's own person and underline one's personal taste or style . A scent note can develop differently on different people's skin. It therefore makes little sense to judge fragrances solely on the basis of the impression on a test strip or on your own skin if a perfume is to be given to other people as a gift. For better development, fragrances are applied to areas of the skin that are well supplied with blood, for example over the hand pulses, on the neck or behind the earlobes.

Allergy sufferers and children can react differently to different perfumes and should test the tolerance on a small inconspicuous area. A second test should take place every ten days. Only if there is no skin irritation after the second test, there is hardly any risk of irritation or allergies. In the case of an allergy, avoiding the allergens or desensitizing them from an experienced doctor will help . If irritation occurs more frequently, it is often sufficient to reduce the concentration or the frequency of use.

Since 1997, 26 fragrances have been classified as potentially allergenic in the European Union . These "allergenic fragrances" may be contained in cosmetic products, but from a certain amount must be listed individually in the list of ingredients with their respective names of the International Nomenclature for Cosmetic Ingredients (INCI = International Nomenclature of Cosmetic Ingredients).

Perfumes can be stored for a relatively long time if they are kept tightly closed in a suitable container in a dark and cool place. Because a perfume is affected by heat, light, moisture and contact with air or reactive surfaces. If stored poorly or over long periods of time, the scent can evaporate or change its scent notes in such a way that one speaks of “overturned” scents.

The Parfumerie Fragonard in Grasse , the capital of perfume

In order to increase sales of perfume and so that customers can familiarize themselves with the different fragrances before buying, test flacons (with a content of around two milliliters) are made available to try out. Small five-milliliter bottles are offered for collectors. The large and small bottles (dummies) for decoration purposes are called facts .

For many well-known fashion manufacturers, the licenses for fragrances and cosmetics are a very important source of income. Perfumes are also used in many products . The main area is products for personal care , but also food and luxury goods (e.g. sweets, cigarettes, teas) can be perfumed or flavored in order to create a certain smell or taste experience. Industrial scent marketing also includes room scenting, i.e. the optimized scenting of business and sales rooms. The French city ​​of Grasse in the Alpes-Maritimes department has been the capital of perfume since the 19th century . In Germany, alongside Leipzig , Holzminden and the East Württemberg region have been fragrance centers since 1945 .

According to the Fragrance Foundation, sales of women's and men's fragrances in the prestige and luxury category (not including inexpensive fragrances) in Germany in 2004 amounted to € 790 million (previous year € 773 million). In a survey, 59% of women aged 14 and over stated that they had used scented water within the last week; in men the corresponding proportion was only 35% (although 65% used an aftershave ). A total of 1,100 fragrances are currently available in stores and around 200 new fragrances are introduced each year, around 60 to 80 of which are luxury fragrances. 97% of the new publications are discontinued within three years because they could not establish themselves economically on the market.

World market shares for flavors and fragrances in% (2015)

There are around 2000 people around the world who practice perfumery .

The best-known industry association is the US-oriented Fragrance Association , which annually awards the “Perfume Oscar” FiFi award in several categories. Since 2006, this prize has been renamed the "German Perfume Prize" by the Fragrance Foundation Germany .

In the 1985 novel Das Parfum by Patrick Süskind , the world of fragrances is impressively portrayed. 21 years later, the novel was made into a film by the German director Tom Tykwer under the title Perfume - The Story of a Murderer .

Well-known museums on the subject of perfume are