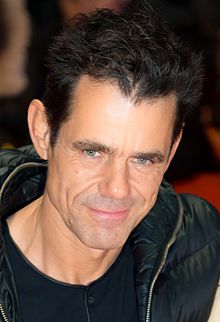 Tom Tykwer at the Berlinale 2017

Tom Tykwer [ ˈtɪkvɐ ] (born May 23, 1965 in Wuppertal ) is a German film director , screenwriter , film producer and film composer . His best-known works are Run Lola Run , Heaven , Parfum - The Story of a Murderer , The International , the science fiction film Cloud Atlas with the Wachowski siblings and the series Babylon Berlin .

Tom Tykwer made his first Super 8 films when he was eleven and worked as a projectionist when he was thirteen. In 1988 he became manager of the Moviemento-Filmtheater in Kreuzberg in Berlin. In 1992 he founded the Liebesfilm company with producer Stefan Arndt and initially directed two short films.

With The Deadly Maria and Winter Sleeper , he achieved much-noticed initial successes. In 1994 he founded the production company X Films Creative Pool together with Stefan Arndt, Dani Levy and Wolfgang Becker . In 1998, his third film, Run Lola Run , was also a huge hit with audiences. This was followed in 2000 by The Warrior and the Empress and in 2002 his first international production Heaven . In 2004 he made the short film True , which is part of the compilation film Paris, je t'aime . He then directed Perfume - The Story of a Murderer , a film adaptation of the novel by Patrick Süskind .

In 2008 Tykwer finished working on the German-American co-production The International with Clive Owen and Naomi Watts in the leading roles. The film focuses on an Interpol agent and a New York state attorney who plan to uncover the illegal activities of a powerful bank. The other acting ensemble includes Armin Mueller-Stahl , Ulrich Thomsen and James Rebhorn . The thriller opened at the beginning of February 2009 for the 59th edition of the Berlin Film Festival , where it was shown out of competition.

In the same year the episode film Deutschland 09 , initiated by Tykwer, was released , in which well-known German-speaking directors were involved with Fatih Akin , Wolfgang Becker , Dominik Graf , Sylke Enders , Romuald Karmakar , Nicolette Krebitz , Isabelle Stever , Hans Steinbichler and Hans Weingartner . The project was based on the film Germany in Autumn (1978). Tykwer himself wrote the short film festive travels with Benno Fürmann in the leading role. Deutschland 09 premiered on February 13, 2009 at the 59th Berlinale and ran out of competition there.

In November 2009 Tykwer shot the tragicomic film Drei in and around Berlin , his first in German in ten years. Sophie Rois , Devid Striesow and Sebastian Schipper play the leading roles . The world premiere took place at the 67th Venice  International Film Festival , where the film was also screened in the official competition for the Golden Lion. In 2011 three nominations for the German Film Prize 2011 followed , including in the categories of Best Film , Best Director and Best Film Music (together with Johnny Klimek , Reinhold Heil and Gabriel Isaac Mounsey ). Tykwer was awarded the director's prize.

From 2009, Tykwer worked together with the Wachowski siblings on the film adaptation of the book Der Wolkenatlas by David Mitchell . Tykwer has been involved as a director, but above all as a composer, in their series Sense8 since 2015 . Cloud Atlas premiered on September 8, 2012 at the Toronto International Film Festival . Together with the directors Chris Kraus , Robert Thalheim , Axel Ranisch and the director Julia von Heinz , Tykwer shot the documentary Rosakinder (2012) about the relationship with their mutual "film father" and mentor Rosa von Praunheim .

Tykwer was one of the directors of the television series Babylon Berlin , which started in September 2017 and is based on a series of novels by Volker Kutscher . In November 2017, Tykwer was appointed jury president of the Berlin International Film Festival 2018 .

Tykwer had musical lessons with the Wuppertal jazz pianist Bernd Köppen for several years . Together with Reinhold Heil and Johnny Klimek , he also writes the music for his films.

Tykwer has been a member of the Academy of Arts , Film and Media Art section, since 2000 , and his own archive is also located in the archive. In 2003 he was one of the founding members of the German Film Academy and was involved in the board of directors in the first few years after it was founded. He has also been a member of the jury of the Michael Althen Prize for Criticism since it was founded in 2012.

Tykwer was in a relationship with Franka Potente until 2002 . He has been married to Marie Steinmann since 2009 and the couple have two children.