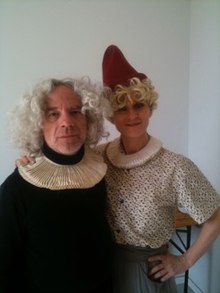 Rois grew up in Ottensheim and did an apprenticeship as a grocery retailer in her parents' grocery store there.

Rois completed her acting training from 1983 to 1986 at the Max Reinhardt Seminar in Vienna .

From 1987 Sophie Rois had engagements in Berlin , initially at the Renaissance Theater , the Theater der Freie Volksbühne and the Schillertheater . Since 1993 she has been part of the ensemble of the Volksbühne am Rosa-Luxemburg-Platz , where she has worked in numerous productions by Christoph Schlingensief , Christoph Marthaler , Frank Castorf ( Pension Schöller , Die Demonen , Des Teufels General ) and most recently René Pollesch . She also appeared in productions by Pollesch and Castorf at the Burgtheater in Vienna. In 1998 she played the Buhlschaft in Hofmannsthal's Jedermann at the Salzburg Festival .

After the appointment of Chris Dercon as artistic director, she submitted her resignation to the Berliner Volksbühne in December 2017. At the same time, Rois was recognized for her portrayal of the witch in the Volksbühne production of Faust. The second part of the tragedy was awarded the Gertrud-Eysoldt-Ring , which she solemnly received on March 17, 2018. The jury praised “her long-standing commitment to ensemble theater at the Berliner Volksbühne” and attested the actress “professionalism, incorruptibility in terms of content and tremendous playfulness”. Thomas Oberender gave the laudation.

Sophie Rois had her first major role in Detlev Buck's road movie We can also be different ... as Nadine, a village pub owner. By the end of the 1990s she had various roles in film and television productions, including Der kalte Finger , Engelchen , Der Hauptmann von Köpenick and Die Siebtelbauern .

In the crime TV series Tatort , Rois played Roxane Aschenwald, who supported the Tatort inspector Moritz Eisner in his fourth Passion case (1999) and his sixth Bad Blood case (2001). Rois played Thomas Mann's daughter Erika in Heinrich Breloer 's three-part television series Die Manns, which was launched in 2001 . In the black comedy Fräulein Phyllis , directed by Clemens Schönborn , from 2004 she was cast in the leading role. In 2008 Rois was seen in Ina Weisses feature film debut, the film drama The Architect , in the role of Hannah.

Rois was awarded for her portrayal of Hanna Blum nominated for the German Film Award in 2011 as the lead actress in the film Three by Tom Tykwer . In 2012 she was seen as Chief Inspector Tamara Rusch on Police Call 110 in Die Gurkenkönigin as a pregnancy replacement for Chief Inspector Olga Lenski alias Maria Simon . In 2013, Rois played the role of Yvonne in the film-drama For Birthday, directed by Denis Dercourt . In Tatort: ​​Der Irre Iwan (2015) she was seen as Rita Eisenheim in the role of the perpetrator.

Activity as a speaker

In 2004 and 2005 she spoke the character Renie Sulaweyo in the radio play Otherland produced by Hörverlag and Hessischer Rundfunk . She lent her voice to the cartoon character Molly Monster in both the movie Molly Monster - The 2015 Film and in the series The Little Monsterin, which runs in the children's program Our Sandman .