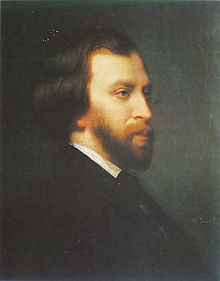 Musset grew up in Paris as the well-protected son of aristocratic parents and completed his school days with splendor in the traditional high school Lycée Henri IV . Afterwards he listlessly began to study law and then medicine, but was mainly active as a young bon vivant. In addition, he was a precocious poet who from 1828 onwards was admired in the circle around Victor Hugo , the "Cénacle". As early as 1830 the Contes d'Espagne et d'Italie (Eng. "Spanish and Italian Stories") appeared, a collection of extremely perfectly formed poems in the romantic style, full of exoticism and exuberant feelings.

In 1832, after the death of his father in the great typhus epidemic of that year, he decided (probably thanks to his inheritance) to live as a writer.

In 1833 he met the novelist George Sand , who was six years his senior , and began a romantic, passionate love affair with her. However, this soon ended on a joint trip to Italy (winter 1833/34) when he fell ill in Venice and she cheated on him with the doctor. The deep crisis that this triggered in Musset inspired him to write poems full of Weltschmerz (published collectively as Nuits , German "Nights", 1835 and 1837), but also to the autobiographical novel Confession d'un enfant du siècle (Ger. "Confession of a young contemporary", 1836), whose protagonist Octave is one of those typically romantic, d. H. disaffected, problematic hero for themselves and those around them.

As early as 1830, Musset had also been writing plays, which, after the failure of the first performed play ( La Nuit vénétienne , Eng . "Venetian Night", 1830), was only intended for reading and published in anthologies. Thus in 1832 and 1834 a volume each appeared Spectacles dans un fauteuil (Eng. “Drama in a chair”) and in 1840 a volume Comédies et Proverbes (Eng. “Comedies and Proverbs”).

The best-known pieces that are still occasionally performed today are Les caprices de Marianne (Eng. "Mariannes Launen", 1833), Fantasio (1834) and On ne badine pas avec l'amour (Eng. "Love is not fun", 1834), as well as Lorenzaccio (1833/34). The former are about disappointed love - a subject that kept the obviously slightly inflamed but narcissistic Musset occupied. Lorenzaccio , the story of a tyrannicide that ultimately only frustrated the perpetrator, reflects the political disappointment of Musset and many intellectuals of his generation who initially had high hopes for the July Revolution of 1830 and felt cheated when the regime of the new "bourgeois king" Louis-Philippe I was quickly taken over by the big bourgeoisie and from 1832 onwards acted increasingly authoritarian and repressive.

In addition to his numerous plays and poetry, Musset also wrote a series of short stories in the 1830s, which were very fruitful for him. In 1838 he received a modest post as a librarian in the Ministry of the Interior, which did not burden him, but ensured him a basic income. From 1845, some of his chess problems were published.

1840 was marked by a serious illness and a deep slump. After that he suffered from frequent depression, wrote very little and took refuge in love affairs and alcohol consumption, which made his condition even worse. After all, he received the cross of the Légion d'honneur in 1845 and in 1847 saw the very successful performance of one of his pieces, Un Caprice (Eng. "A mood / crazy idea", 1837). In 1852, after unsuccessful attempts in 1848 and 1850, he was elected to the Académie française , although it was certainly helpful that he had joined the new regime of Louis-Napoléon Bonaparte .

On May 2, 1857, Alfred de Musset died in his sleep in Paris of cardiac insufficiency caused by longstanding alcoholism and aortic valve insufficiency. Before his death, his brother observed pulse-synchronized nods of the head, a symptom that is still known today as the Musset sign . He was buried in the Père Lachaise cemetery in Paris .

Musset's enduring achievement is today his dramatic work, which, after its failure right at the beginning, he no longer wrote with a view to the currently prevailing romantic theater doctrine, but according to his own, moderately classicist ideas. Because these ultimately turned out to be more forward-looking than z. B. that of his initially more successful competitor Victor Hugo, whose pieces have hardly been performed for a long time. 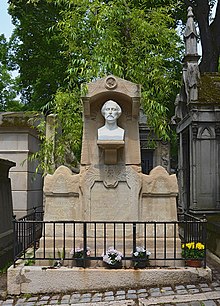