Puccini is a redirect to this article. Further meanings are listed under Puccini (disambiguation) . 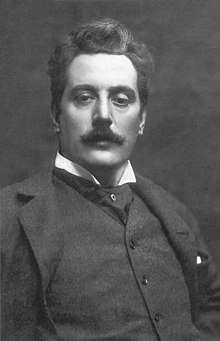 Puccini came from a family of musicians. His parents were Albina Magi and Michele Puccini . He was the conductor of the Lucca town band, organist at the cathedral and composer of operas and masses , his grandfather Domenico Puccini was also a composer of orchestral works and piano pieces, and his great-grandfather Giacomo Puccini was a composer and organist.

In 1876 Giacomo Puccini wrote a symphonic prelude . He attended a performance of Giuseppe Verdi's opera Aida in Pisa , which made a great impression on him. In the autumn of 1880 he went to Milan , where he was able to enroll at the local conservatory thanks to a scholarship . His teacher was Amilcare Ponchielli . Puccini's exam paper in 1883 was the Capriccio Sinfonico , from which he later used parts for the beginning of his opera La Bohème .

On May 31, 1884, he made his debut at the Teatro Dal Verme in Milan with his first opera Le Villi , for which he received great success with audiences and critics. After a long history of genesis, his opera Edgar premiered on April 21, 1889 at La Scala in Milan without any particular success. Four years later, on February 1, 1893, the opera Manon Lescaut premiered in the Teatro Regio in Turin with great success. The opera La Bohème was also premiered in this theater on February 1, 1896 , conducted by Arturo Toscanini . On January 14, 1900, the opera Tosca premiered at the Teatro Costanzi in Rome .

In 1903 Puccini, who loved fast automobiles, had a serious car accident, the consequences of which he suffered for several months. Thus he is one of the earliest prominent casualties of the automotive passenger transport.

Just one year later, Puccini married his partner Elvira Bonturi in 1904, with whom he already had a son Antonio (also Tonio or Anton; * December 23, 1886; † February 21, 1946). The first performance of his opera Madama Butterfly on February 17, 1904 was an extraordinary failure. After a revision by his friend and colleague Alfred Brüggemann , among others , the opera was performed again three months later at the Teatro Grande in Brescia and has now been enthusiastically received.

With La fanciulla del West he made his glamorous debut at the Metropolitan Opera in New York on December 10, 1910 . The conductor was Arturo Toscanini, the male lead sang Enrico Caruso , the part of Minnie Emmy Destinn . On 14 December 1918, a triptych were at the Metropolitan Opera ( Il trittico ) combined one-act Il tabarro , Suor Angelica and Gianni Schicchi premiered.

From 1919 to 1921 Puccini stayed in the municipality of Orbetello in southern Maremma , where he bought and permanently lived an old observation tower on the Tagliata beach, now called Torre Puccini , from the time of Spanish rule. Here he began composing his last opera Turandot , which he left unfinished. In 1921 he moved to Torre del Lago (now a district of Viareggio as Torre del Lago Puccini ). As early as 1900 he bought his own house in the village. The passionate smoker died on November 29, 1924, a few days after a throat operation for throat cancer , in a clinic in Brussels. The memorial address at the funeral service in Milan Cathedral was given by Benito Mussolini . His last opera Turandot was premiered in the unfinished version on April 25, 1926 at La Scala in Milan under the direction of Arturo Toscanini. Toscanini stopped the performance at the appropriate point with the words "At this point the maestro died". In the following performances the opera was performed with the ending completed by Franco Alfano based on the composer's drafts.

The artistic work of Giacomo Puccini extended from 1884 to 1924. In these forty years twelve operas were written. The small number of works is among other things. based on the early success of Puccini, which made him prosperous. This enabled the composer to pursue his preferences for travel and fast cars in detail. Puccini also generally showed a slow but thorough way of working. The tomb of Puccini and his wife is in his house in Torre del Lago. The Italian state has awarded Puccini's birthplace in Lucca, which now houses a museum , with the European Heritage Label at the same time as the birthplace of Gioachino Rossini and Giuseppe Verdi . The enormous success of Puccini's works, which began during the composer's lifetime, has continued to the present day.

The Puccini monument in Lucca , created by Vito Tongiani 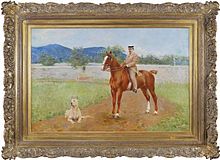 The asteroid (4579) Puccini was named after him in 1991. The same applies to the Puccini Spur , a mountain ridge on Alexander I Island in Antarctica.