Aida is an opera in four acts by Giuseppe Verdi based on a libretto by Antonio Ghislanzoni , based on a scenario by the Egyptologist Auguste Mariette . The premiere took place on December 24, 1871 in the Khedivial Opera House in Cairo.

The opera is set in Egypt at the time of the pharaohs . The title character Aida is an Ethiopian king's daughter who was abducted to Egypt as a hostage . The Egyptian military leader Radamès has to choose between his love for Aida and his loyalty to the Pharaoh or the marriage to Amneris, the Pharaoh's daughter .

First image: Hall in the King's Palace in Memphis

The high priest Ramfis tells the captain of the palace guard Radamès that the goddess Isis has appointed a general for the upcoming war against Ethiopia and that he now wants to announce the decision to the king. Radamès secretly hopes to be the chosen one himself and to win the hand of Aida, an Ethiopian slave of the Egyptian king's daughter Amneris, through military success. He dreams of bringing her back to her beloved home and being able to "lift her to the sun". The Pharaoh's daughter Amneris, who is in love with Radamès, tries to find out in conversation whether he reciprocates her feelings. When she realizes a change in his behavior when Aida steps up, she suspects her to be a rival and hides her jealousy behind feigned friendliness towards her slave.

The king enters with Ramfis and his court and receives a messenger who reports on the invasion of Ethiopian troops led by their king Amonasro. Only Aida knows that she is really Amonasro's daughter. The king announces Radamès' appointment as general. He and Ramfis get those present in the mood for the war. Aida is left alone, torn between wanting her beloved Radamès to return victorious and wanting Ethiopia to win the war. She asks the gods for assistance.

Second picture: In the Temple of the Volcano in Memphis

In a solemn ceremony with religious dances, Ramfis presents Radamès his sword, and together with the priests they ask the god Ptah for victory.

First picture: A room in the Amneris apartments

The Egyptian army has won. Amneris coaxes the secret of her love from Aida by telling her that Radamès was killed in battle. Amneris recognizes her rival in Aida and orders her to accompany her as a slave to the upcoming Victory Festival.

Second picture: One of the city gates of Thebes

The King of Egypt solemnly received Radamès and his troops at the gates of Thebes . He orders the Ethiopians captured in the war to be brought forward. One of the prisoners is Amonasro, the Ethiopian king and Aida's father. He pretends to be a subordinate in Thebes and describes the alleged death of the Ethiopian king. Both Amonasro and Radamès ask for the prisoners to be released. The high priest Ramfis and the king can no longer evade these requests and release the prisoners. Only Amonasro as the prisoners' spokesman and Aida are said to be held hostage. As a reward for his successful campaign, Radamès is supposed to marry his daughter Amneris at the request of the king and become king of Egypt himself after his death. 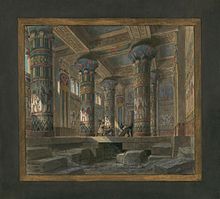 Stage design by Philippe Chaperon for the second scene of the third act, Cairo 1871

It is night on the banks of the Nile. The Temple of Isis rises in the background. Ramfis leads Amneris to the temple where she wants to pray to the goddess Isis the night before her wedding. Aida is secretly waiting for Radamès here. But first her father appears. He wants to persuade his daughter to elicit the secret from Radamès which route the Egyptian troops would take to invade Ethiopia. But although her father reminds her of her distant home with moving words, the daughter resists him. When Amonasro threatens to cast her out (“You are not my daughter, you are the slave of the pharaohs”), she finally gives in. Meanwhile Radamès arrives and Amonasro has to hide. After another victory against the rebelling Ethiopians, Radamès hopes to be able to ask the king to marry Aida. Aida makes it clear to him that Amneris would never allow this and asks her lover to flee Egypt with her. When he hesitates, she accuses him of not loving her. Radamès then agrees to flee together. Perhaps he knows a secret path that is not guarded by the Egyptian troops? After some hesitation, you name Radamès, who has no idea that he is being overheard, the Napata Gorge . Amonasro now emerges triumphantly from his hiding place and reveals himself to be the king of the Ethiopians. Radamès realizes that he has inadvertently betrayed his fatherland and thereby dishonored himself. When the three of them want to flee, Amneris emerges from the temple and shouts “Traitor!” (“Traditor”). Amonasro lunges at her to stab her, but Radamès steps in and prevents the bloody act. But he refuses to flee with Aida and her father. Then he hands his sword to the rushing Ramfis and lets himself be captured without resistance. In the meantime, Amonasro has managed to escape with his daughter Aida. 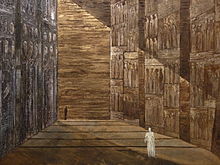 Stage design by Helmut Jürgens for Aida , performance of the National Theater Munich 1963

First image: room in the king's palace, from which one corridor leads to the courtroom and another to the prison in which Radamès is being held

Amneris is desperate, torn between anger, pain and love. She wants to save Radamès and has him shown. She implores him in vain to defend himself before the priests' court in order to save his life. But Radamès no longer sees any sense in a life without Aida, whom he believes Amneris has killed. Amneris then reported that Amonasro had fallen. However, Aida was able to flee and is alive. She promises Radamès the life, the throne and her love if he renounces Aida. But Radamès is determined to die and returns to his underground prison. Invisible you can hear the accusation of the priests and hear Radamès' three silences. He is sentenced to be buried alive in the rooms under the goddess's altar. Amneris begs the priests for mercy and eventually curses them for their cruelty.

While Radamès is walled up in an underground vault, he hopes that Aida is now safe in Ethiopia. After the stone has closed the crypt, Radamès hears a sigh, sees a shadow and recognizes Aida, who sneaked into the crypt at daybreak to die with him, finally in his arms. Together, the two lovers take a relaxed and transfigured farewell to this “valley of tears”, while the priestesses are singing up in the temple and Amneris mournfully prays to Isis that Radamès' soul may find peace in peace. 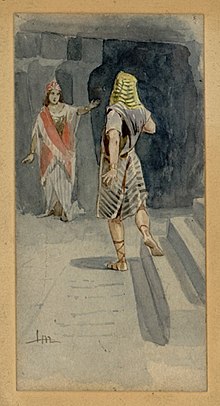 Watercolor drawing after the European premiere at La Scala in Milan , 1872: Radamès sees Aida in the underground vault of the temple

The orchestral line-up for the opera includes the following instruments:

Performance in the Arena of Verona 2011

This article is not adequately provided with supporting documents ( e.g. individual evidence ). Information without sufficient evidence could be removed soon. Please help Wikipedia by researching the information and including good evidence.

For the opening ceremony of the Suez Canal in 1869 and the opening of the new Khedivial Opera House in Cairo , Giuseppe Verdi was commissioned to compose a hymn. Verdi was asked to do so by the ruling Khedive Ismail Pasha , who had been brought up in Europe, and his opera director, but refused several times. Therefore the opera house was opened with Verdi's Rigoletto . Nevertheless, the Khedive wanted a new composition of an opera “in an exclusively Egyptian style” for the new theater.

Eventually the founder of the Egyptian Antiquities Administration and Egyptologist living in Cairo Auguste Mariette hit upon an idea. In 1869 he wrote the libretto for an opera called Aida set in ancient Egypt. He had this printed in several copies and sent it to Verdi's former librettist and manager of the Paris Opéra-Comique , Camille du Locle . He handed over the libretto with a plot sketch as a draft of an opera scenario to Verdi with the hint that if he did not get involved in the project, it would be proposed to his competitor Richard Wagner . Verdi was then inclined to concern himself with the work. He thought the libretto was suitable, negotiated the fee and began composing.

Verdi demanded and received 150,000 gold francs for the composition, which was probably the highest fee for a composer until then. Further demands were made: Verdi's own trumpets, the so-called Aida trumpets , were custom- made for the stage orchestra during the triumphal march .

“Compose an opera for Cairo !!! Phew! I'm not going to stage it because I would have to fear being mummified there. I have to tell you, however, that the contract has not yet been signed. But since my conditions - and they were harsh - have been accepted by telegram, it can be considered concluded. If someone had said to me two years ago, 'you will write for Cairo', I would have thought they were mad, but now I see that I am the mad. "

Although Verdi had already completed his composition in November 1870, it could not be premiered until December 24, 1871 in Cairo. The reason for the delay was that the costumes and props were included in the Prussian siege of Paris in the Franco-Prussian War (1870–1871).

Aida is one of the most successful of the great operas of the 19th century.