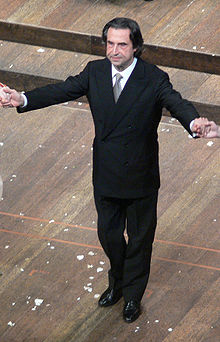 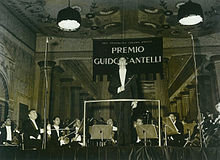 Riccardo Muti's musical parental home encouraged his interest in music, which is why he received piano and singing lessons at an early age. He completed a music degree at the Conservatorio di Musica San Pietro a Majella in Naples and graduated as a pianist . Muti learned composing and conducting at the Verdi Conservatory in Milan .

The 1967 Guido Cantelli Competition Conducting Prize brought Muti public attention. Shortly thereafter, he made his debut as a conductor with the Italian radio and television orchestra. In 1969 he became chief conductor of the Maggio Musicale Fiorentino after a performance with Svyatoslav Richter . He quickly became a sought-after guest conductor in all the world's major orchestras. In 1971 Herbert von Karajan invited him to the Salzburg Festival for the first time . In 1972 Muti made his US debut with the Philadelphia Orchestra , of which he became music director in 1980.

Muti lives in Ravenna and there directs the Italian Opera Academy - Riccardo Muti , an "academy for young conductors, singers and répétiteurs".

Muti conducted and conducts a large number of renowned orchestras at opera and concert performances as well as on the occasion of recordings. Works by Luigi Cherubini and Wolfgang Amadeus Mozart are just as much a part of his repertoire as compositions by the Italian Romantics, operas by Richard Wagner and pieces from the 20th century.

After Otto Klemperer's death in 1973, Muti became his successor with the New Philharmonia Orchestra London. As the successor to Eugene Ormandy, he was chief conductor of the Philadelphia Orchestra from 1980 to 1992 . Muti has held this post with the Chicago Symphony Orchestra since 2010, succeeding Bernard Haitink .

Muti has worked closely with the Vienna Philharmonic for decades. He leads them in subscription concerts and on tours. In 1993 Muti conducted the New Year's Concert for the first time ( succeeding Kleiber), and in 1997, 2000, 2004 and 2018 he also took over the direction here.

From 1971 on, Muti conducted every year at the Salzburg Festival . Since then he has directed numerous opera and concert performances there. In 1983 he conducted a new production of Wolfgang Amadeus Mozart's Così fan tutte (director: Michael Hampe ) and in 2005 Die Zauberflöte (director: Graham Vick ). In 2006 he supervised a new production of The Magic Flute directed by Pierre Audi with a set by Karel Appel . In the Großer Festspielhaus he premiered the composition Giusta Armonia by Fabio Vacchi with the Vienna Philharmonic . In 2017 he conducted Aida at the Festival .

In December 2005 and April 2006 Muti conducted a total of eight performances of Le nozze di Figaro at the State Opera (direction and production: Jean-Pierre Ponnelle ).

On December 7, 2004, Muti conducted the opera L'Europa riconosciuta by Antonio Salieri (director: Luca Ronconi , set: Pizzi) on the occasion of the reopening of La Scala in Milan , after the theater had previously been closed for several years for renovation work.

Riccardo Muti was appointed chief conductor of the Philharmonic Orchestra of La Scala in Milan in 1987 and toured Japan, Germany and France with him the following year, followed by a tour of what was then the USSR in 1989.

In April 2005, Muti ended his work as music director of La Scala in Milan after his preferred candidate for artistic directorship, Maurizio Meli, had not received the hoped-for approval of the workforce. The musical staff spoke out against Muti with 700 to 5 votes. Instead, Meli became director of the Teatro Regio di Parma .