Boulez is a redirect to this article. Further meanings are listed under Boulez (disambiguation) . 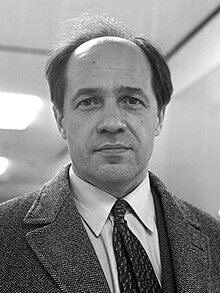 Pierre Boulez, who actually wanted to study mathematics and technical sciences first, became a composition student of Olivier Messiaen at the Paris Conservatory in 1943 and studied with Andrée Vaurabourg , Arthur Honegger's wife , and René Leibowitz in 1945/1946 . From 1946–1956 he was musical director of the Madeleine Renaud / Jean-Louis Barrault ensemble at the Théâtre Marigny . 1951 he worked in the Groupe de Recherches Musicales of Pierre Schaeffer with the Musique concrète and visited in 1952 for the first time the International Summer Courses for New Music in Darmstadt . There he worked as a lecturer and conductor of the Darmstadt Chamber Ensemble from 1955 to 1967.

In 1954 he founded the Domaine Musical concert series in Paris , which he directed until 1967, and became guest conductor of the Südwestfunk Orchestra in Baden-Baden . He also taught at the Music Academy in Basel from 1960 to 1963 and at Harvard University in Cambridge (Massachusetts) in 1963 .

In 1966 he made his debut as a Wagner conductor with Parsifal at the Bayreuth Festival . He turned away from the tradition of slow tempi ; its 1967 performance was the one with the shortest playing time for this work in Bayreuth. Also there he conducted the Ring des Nibelungen in 1976 in the initially controversial and later largely praised production by Patrice Chéreau . This production on the occasion of the 100th anniversary of the Bayreuth Festival was called the Ring of the Century .

1967–1972 he was guest conductor of the Cleveland Orchestra , 1971–1975 he led the BBC Symphony Orchestra and 1971–1977 as successor to Leonard Bernstein the New York Philharmonic Orchestra . He founded the Institut de Recherche et de Coordination Acoustique-Musique ( IRCAM ) at the Center Beaubourg in Paris , of which he was director from 1976–1992. 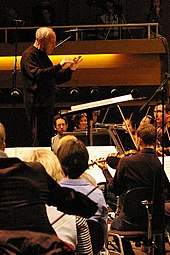 Pierre Boulez 2008 at the Donaueschinger Musiktage

On February 24, 1979, he conducted the world premiere of the version of Lulu by Alban Berg, completed by Friedrich Cerha, with Teresa Stratas in the leading role at the Paris Opera .

From the 1990s, Boulez worked as a conductor in concerts and CD recordings, mainly with leading traditional orchestras , including the Berlin Philharmonic and the Vienna Philharmonic . In 2004 he returned to Bayreuth as the conductor of Parsifal (staging: Christoph Schlingensief ) .

At the opening concert of the Donaueschinger Musiktage on October 17, 2008, under the direction of Boulez, pieces by Fabián Panisello , Isabel Mundry and Enno Poppe with the SWR Symphony Orchestra Baden-Baden and Freiburg premiered and his own work Figures - Doubles - Prismes (1963/1968 ).

Pierre Boulez had lived in Baden-Baden, Baden-Württemberg , since the early 1960s , where he died in 2016 at the age of 90. The city awarded him the Gold Medal of Honor in 2004 and honorary citizenship in 2015. Boulez was buried on January 13, 2016 in the main cemetery in Baden-Baden . An official memorial service took place in the presence of the French Prime Minister Manuel Valls and numerous personalities from the political and cultural life of France on the following day in the church of Saint-Sulpice in Paris.

In addition to Karlheinz Stockhausen and Luigi Nono , Pierre Boulez was one of the outstanding representatives of the musical avant-garde , especially serial music, from the mid-1950s . In his compositions, Boulez combined rationality and logic with the poetic traditions of French music, especially impressionism . His first creative phase was characterized by an extremely critical attitude towards his own work and the compositions of others. So he repeatedly disrupted performances by more conservative colleagues with like-minded colleagues and withdrew numerous early works. But even later he revised his older works again and again so that they hardly reached their final form, but always only represented stages of a compositional development process.

Laureate of the Christoph and Stephan Kaske Foundation