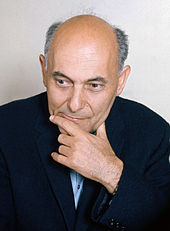 In the 1920s there was a "Hungarianization" wave in Budapest, which "suggested" to the bearers of German and German-Jewish names to have their names Hungarianized - and so the surname Stern became Solti in 1926 , after the place Solt , from which the family came. Solti's father Móricz Stern, however, stayed with his maiden name all his life. His cousin was the Hungarian-German photographer László Moholy-Nagy .

Solti first received piano lessons and later studied at the Franz Liszt Music Academy in Budapest with Béla Bartók , Ernst von Dohnányi , Leó Weiner and Zoltán Kodály, among others . In 1930 he was répétiteur at the Budapest Opera , from 1935–37 assistant to Bruno Walter and Arturo Toscanini in Salzburg.

On March 11, 1938, Solti made his debut as a conductor at a performance of the Marriage of Figaro at the Budapest Opera. On the same evening the news of the imminent invasion of German units in Austria spread . After that, many Hungarians feared that Hitler would invade Hungary too. Miklós Horthy , who wanted to strengthen the connection between Hungary and Nazi Germany, pushed anti-Jewish legislation along the lines of the Nuremberg Laws ; for example, it was difficult for Jews in Hungary to gain access to professions. Jewish artists were only allowed to perform with the Omike association in their own rooms such as the Goldmark Hall. Solti's family therefore urgently advised him to emigrate. Solti went to London, made his debut at the Royal Opera House and took over the direction of the London Philharmonic Orchestra for one season. From now on his first name was no longer György , but Georg .

Solti spent the Second World War in Switzerland, temporarily as an assistant to Toscanini in Lucerne, and in 1942 won a piano competition in Geneva. Immediately after the war, Solti went to Germany because there were many vacancies there. The American military government hired him in 1946 as general music director of the Bavarian State Opera in Munich as the successor to the deposed Clemens Krauss and the briefly appointed Hans Knappertsbusch , who had been banned from performing until 1947. In 1946 Solti married the Swiss Hedwig (Hedi) Oechsli, the daughter of a university lecturer in Zurich, whom he had met in Switzerland. The marriage lasted until 1964 and remained childless.

As early as 1947, Maurice Rosengarten signed Solti for the Decca record company , a contract that would last until Solti's death 50 years later. In 1952, Solti moved to the Frankfurt Opera and increasingly had guest appearances with major orchestras and opera houses around the world. In 1953 he took West German citizenship . Solti's extensive experience as an opera conductor enabled the first studio recording (1958 to 1965) of Richard Wagner's Der Ring des Nibelungen with the Vienna Philharmonic, which is still considered a great moment in record history. 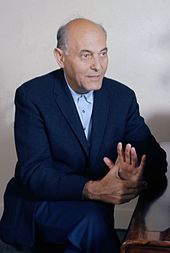 In 1961, before taking up the position, Solti canceled an engagement with the Los Angeles Philharmonic Orchestra , because without consulting Solti, Zubin Mehta had been hired as second conductor. Solti valued Mehta, but did not want to accept the post after the abusive incident. In 1961 he began his ten-year tenure at the Royal Opera House in London. After separating from his first wife (1964), Solti met BBC presenter Valerie Pitts in an interview . After courting the married woman for three years, she divorced. Solti and Valerie Pitts married on November 11, 1967. The marriage resulted in two daughters. In 1972 Solti became a British citizen and remained there until his death.

In 1969, after Soltis' decade-long career as an opera conductor, he began his second major artistic phase with the engagement as chief conductor of the Chicago Symphony Orchestra . Solti stayed there for 22 years until 1991. In addition, he was musical director of the Orchester de Paris from 1971 to 1975 and artistic director of the London Philharmonic Orchestra from 1979 to 1983. In 1983, he also conducted the Ring des Nibelungen at the Bayreuth Festival . Solti died in 1997 after a heart attack a few weeks before his 85th birthday.

Solti in Vienna and Salzburg

For many years Solti was one of the most important conductors of the Vienna Philharmonic , which he conducted in Vienna and Salzburg, among others. Another long-term relationship connected him with the Salzburg Festival , where he was already involved in the 1930s as an assistant to Arturo Toscanini and Bruno Walter. After Herbert von Karajan died in 1989 shortly before the premiere of Giuseppe Verdi's Un ballo in maschera , Solti took over this production and subsequently became an important designer of the Salzburg Festival. He also took Karajan's place at the Easter Festival for two years , where he directed Die Frau ohne Schatten in 1992 and Falstaff in 1993; these productions were also shown in the summer. Solti also conducted the Salzburg Festival productions Idomeneo 1951, Die Zauberflöte 1955 (set by Oskar Kokoschka ) and in the Mozart year 1991 and most recently Fidelio 1996.

1991 conducted Solti 200th anniversary of Wolfgang Amadeus Mozart whose Requiem in Vienna's St. Stephen's Cathedral . Although he has close artistic ties with Vienna, he only stepped into the podium of the Vienna State Opera in 1980 for the new production of Verdi's Falstaff (directed by Filippo Sanjust ), which he directed .

Solti was one of the most comprehensive opera conductors of the second half of the 20th century. He recorded all the popular operas by Richard Wagner, Richard Strauss and Giuseppe Verdi, after conducting them for 25 years at opera houses.

Solti's last recording was a recording of a concert in Budapest where he conducted works by his former teachers: Bartók's Cantata profana Sz 94, Kodály's Psalmus hungaricus op.13 and Weiner's Serenade op.3. 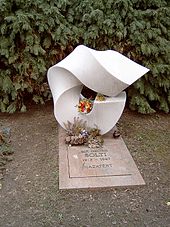 During his tenure in London Solti was awarded membership in the Order of the British Empire : 1968 as Commander (CBE), then in 1971 as Knight Commander (KBE), combined with the addition of "Sir". He has also been honored with awards in many other countries.

American music critics particularly loved Solti's Chicago recordings. So Solti is the artist who received the most Grammys , regardless of the music genre. 31 Grammys went to him personally including a Lifetime Achievement Award and a Trustees Award , a further six to technicians (production / recording) in his recordings and one to a soloist. He was nominated a further 74 times.

In 1992 Solti was awarded the Léonie Sonning Music Prize and the Frankfurt Music Prize.

The Solti Foundation US was founded in 2000 . The foundation's mission is to support talented young American musicians at the beginning of their professional careers. Georg Solti's widow Valerie Solti is the honorary chairman of the foundation.

Chief Conductor and Music Directors of the Dallas Symphony Orchestra

Laureate of the Frankfurt Music Prize