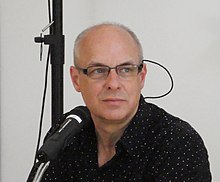 Eno attended St. Joseph's College, Birkfield, Ipswich , the Ipswich Art School and the Winchester School of Art, which he graduated in 1969. In art school, he began using cassette recorders as musical instruments and played in bands for the first time. He was encouraged to do this by one of his teachers, the painter Tom Phillips. This put him in touch with Cornelius Cardew's Scratch Orchestra . The first published recording that Eno was involved in was made for Deutsche Grammophon , which brought out Cardew's The Great Learning (recorded in 1971). 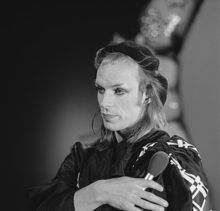 Eno began his career in 1971 as a co-founder of Roxy Music , for which the self-proclaimed "non-musician" played keyboards and synthesizers . Particularly striking was his to the glam rock ajar -Chic campige presentation with feather boa , platform shoes and glitter towels, which he combined with exalted movements on stage. After the second album For Your Pleasure in 1973 he got out of Roxy Music again and took on a number of his own albums, which were strongly influenced by glam rock.

Eno's solo albums from 1973 to 1977 ( Here Come the Warm Jets , Taking Tiger Mountain (By Strategy) , Another Green World and Before and After Science ) show him as an adventurous and innovative pop musician who knows almost no boundaries outside of his boyish voice.

With his first ambient work, he popularized a method for sound generation developed by Robert Fripp and known as Frippertronics , by means of which tape recordings of various musicians, especially from the minimal music scene, were modified. In the case of sound generation by means of Frippertronics , two tape recorders are connected to one another in a feedback system like a tape echo , with the distance between the machines determining the frequency of the echo pulse. Together with Fripp, Eno released the albums (No Pussyfooting) (1973) and Evening Star (1975). With Ambient 1: Music for Airports (1978), which was allegedly inspired by a negative listening experience at Cologne / Bonn Airport , he christened the ambient and shaped it from then on. Much of his work to this day can be assigned to the ambient .

Eno worked as a musician and producer with various other artists. He can be heard on the "Berlin Trilogy" - Low (1977), Heroes (1977) and Lodger (1979) - by David Bowie and can be found here a. a. Co-author of the song “Heroes” . In 1978 he produced Devo's Q: Are We Not Men? A: We Are Devo and the legendary compilation of the New York no-wave scene, No New York . He produced three Talking Heads albums : More Songs About Buildings and Food (1978), Fear of Music (1979) and Remain in Light (1980) as the climax. His 1981 album with David Byrne (Talking Heads), entitled My Life in the Bush of Ghosts, is one of the first non-rap / hip-hop albums to include extensive sampling .

In the 1990s, Eno produced artists as diverse as the real-world artist Geoffrey Oryema to the band James , as well as the singer Jane Siberry and the performance artist Laurie Anderson , with whom he also designed the exhibition Self Storage (1995). In 1994/1995 Eno worked again with David Bowie, this time on his album 1. Outside . Since then, Eno has also been a visiting professor at the Royal College of Art in London .

In 1994 Eno was asked by developers of the Microsoft Chicago project to compose the start melody for Windows 95. Ironically, this happened on his Apple Macintosh . In 1996, Brian Eno was one of the founders of the Long Now Foundation , which aims to promote awareness of the importance of long-term thinking. In 1998 he took up an honorary professorship at the Berlin University of the Arts . In August of the same year, Eno appeared twice at the opening of an exhibition Brian Eno: Future Light - Lounge Proposal in the Art and Exhibition Hall of the Federal Republic of Germany , and both appearances were webcast live.

He is also co-producer of Paul Simon's 2006 album Surprise . In 2006 Brian Eno published the DVD 77 Million Paintings, which was created with a generative computer program. He used the computer - based on real paintings - to generate 77 million visual representations as "originals" by means of cross-fades and combined these with music generated from sound layers.

As a producer he began working on the fourth album Viva la Vida or Death and All His Friends by the band Coldplay in 2006 , which was produced by Eno together with Markus Dravs and Rik Simpson and was released in spring 2008. U2 announced on their official website in early June 2007 that Eno and Daniel Lanois had come to the studio in Morocco to record a new U2 album . The album No Line on the Horizon resulting from this collaboration was released in February 2009.

In 2006, Eno designed the ringtones and signal tones of the 8800 Sirocco Edition mobile phone exclusively for Nokia . Together with the musician and software designer Peter Chilvers , he developed the two programs Bloom and Trope for the iPhone . Both programs, as well as Air , developed by Chilvers on the basis of Eno's ideas, generate random, infinite pieces of music such as 77 million paintings .

In the same year he wrote the score for the documentary The Pervert's Guide to Cinema by Sophie Fiennes about the philosopher and psychotherapist Slavoj Žižek .

In May and June 2009 he designed the second Sound and Light Festival during which, among other things, the Sydney Opera House was illuminated. In 2009 he provided the soundtrack to Peter Jackson's film In My Heaven (The Lovely Bones). In 2010, the indietronic band MGMT released a piece of music called Brian Eno .

In November 2010, Eno's album Small Craft on a Milk Sea was released on Warp Records . In early July 2011, the album Drums Between the Bells , created in collaboration with the British poet Rick Holland, was also released by Warp.

In November 2012, again with Warp, the album Lux was Brian Eno's first solo work in seven years. The almost 75-minute composition was conceived as part of an installation in the Reggia di Venaria Reale near Turin and was heard there for the first time before it was released a few days before its commercial release (and with reference to the album Music for Airports ) at Tokyo 's Haneda Airport was premiered. The album received mostly positive reviews, and parallels were made with Eno's early ambient works, particularly Thursday Afternoon .

Music projects and musical collaboration with other artists

As a producer, remixer or fellow musician (selection)

Laureate of the Frankfurt Music Prize