Camp is a stylistically over-pointed way of perceiving cultural products of all kinds ( film , music , literature , visual arts , fashion , make-up, etc.) that is oriented towards the artificial and exaggeration; Often the works that are experienced as “campy” belong to trivial or popular culture , which, however, does not serve (only) thoughtless diversion, but is aesthetically enhanced.

Already the aestheticism associated with the dandyism of the turn of the 19th and 20th centuries (in literature e.g. by Oscar Wilde ) can be seen as a forerunner of the camp , but its actual period is to be settled in the 1950s and 1960s . There is a certain connection to Pop Art and other art movements of this time, which are based on everyday culture . The critic Susan Sontag made a connection between camp and homosexuality in her essay Notes on Camp . "Camp" has in English a. a. the meaning "affected" or "cheesy". 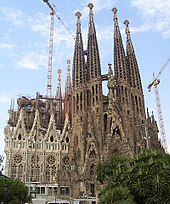 Objects, art styles and artists often acquire " camp status" when they have just - or for some time - gone out of fashion in the mainstream . Here the camp is close to the historicization of past popular culture, to the retro wave and to submerged socio-cultural mentalities . The camp perception is not looking for the "eternal values" that are supposed to be saved from the stream of the past when reinterpreting cultural classics, for example, but rather focuses on the ephemeral aspects of art and representation. Works and people who wanted to convey timeless archetypes and greatness (“ the woman”, “ the beauty”, “ the beast”) of their epoch and who failed more or less grandly are particularly popular here . The public appearances of a politician like General de Gaulle , who single-handedly wanted to represent the dignity of an entire nation with deadly serious pathos , could be perceived as campy . The hopelessly exaggerated pathos of Antoni Gaudí's architecture or the self-deprecatingly exaggerated depiction of a sex icon by Mae West were classic Camp articles.

In a narrower sense, Camp originally referred primarily to exaggerated, sometimes self-deprecating portrayals of feminine affects, as prevailed in the gay subculture before 1969 and among some classic female Hollywood stars ( Bette Davis etc.).

A style that is now considered outdated, ridiculous or unsuccessful is not automatically camp . According to Susan Sontag , a certain theatricality , passion and playfulness must be visible; Camp - irony is also predominantly ironic in a sentimental and loving way, never just wants to present the selected objects, people and works of art or expose them to ridicule. Furthermore, good campy art arises rather naively and involuntarily; Sontag contemptuously called “camping”, a half-hearted adaptation of the camp look .

A certain overlap of the “ camp-sensibility ” with semiotic cultural analysis should also be considered. Camp enthusiasts often abstract from the content of the artifacts presented, they enjoy shape, decor, ornament and variation - therefore largely defined genre arts are also particularly grateful objects for camp consumers. The structural-semiotic analysis also concentrated less on the meaning of artistic creations intended by authors and artists than on the network of relationships and the play of signs, on the mechanisms of reception. Semiotics like Umberto Eco or Roland Barthes did not shy away from analyzing textile fashion, trivial novels , amusement parks or wrestling .

Extreme - and intentional - camp were e.g. B. the early films of John Waters ; Camp elements can also be found in David Lynch's cinematic art and in the works of the writer Christian Kracht . Even in German hits, some (rather involuntary) camp aspects want to discover, for example in the music of Howard Carpendales . Madonna's use of camp aesthetics, often directly copied from the trends of gay subculture, already describes a central problem of the camp : Is that still a friendly quote or is it already exploitative appropriation by the established culture industry?

Camp always had the character of an insider tip, was mostly the appreciation of remote aesthetic aspects of mass culture in small urban groups of initiates. The phenomenon can also be understood as an initially quite exclusive " emphasis on the banal". On the other hand, critics complain that the camp concept is overstretched when, for example, doctoral theses on Rudi Carrell or Heinz G. Konsalik are written or Guildo Horn's hit parodies and Bully Herbig's genre satiries are declared a cult with a wink . So Diedrich Diederichsen speaks in a similar context about "this disgusting, modern benevolence towards the supposed triviality".