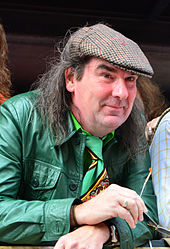 Guildo Horn (born Horst Heinz Köhler in Trier on February 15, 1963 ) is a German pop singer , presenter and actor . In 1998 he mated Guildo loves you! 7th place at the Eurovision Song Contest .

After graduating from the Auguste-Viktoria-Gymnasium Trier in 1983, Horn initially completed a social year in a Lebenshilfe workshop for people with intellectual disabilities in Trier , studied pedagogy at the university there until 1994, and after graduating, worked as a music therapist at Trier Lebenshilfe.

Horn has a son born in 1995 from his first marriage. After the end of this marriage, Horn lived with the stunt woman Tanja de Wendt until the summer of 2005 . In 2013 Horn married his long-time girlfriend Daniela, with whom he has had a daughter since 2012. Horn lives in Much in the Bergisches Land . 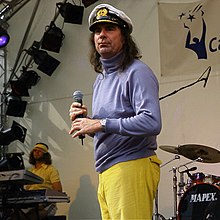 Guildo Horn began as a pop singer in Trier in 1991 . From October 1992 to 1994 he performed almost every Sunday evening with ironically tinged hits at the Luxor music club in Cologne . In 1994 he sang for the first time in the ZDF hit parade , where he took third place. He toured Germany and also performed at the Rock am Ring music festival .

He was successful with his group Guildo Horn & the Orthopedic Stockings. In 1998 he appeared with the title Guildo loves you! at the Eurovision Song Contest for Germany. The song was written by Stefan Raab under the pseudonym "Alf Igel" - a reference to the hit producer Ralph Siegel . Horn took seventh place. His media manager at the time, Johannes Kram, is considered to be largely responsible for the media hype surrounding Horn and the associated revival of the Eurovision Song Contest in Germany, which continues to this day.

At concerts he interacts with the audience - often in extraordinary costumes . Some of his hits are cover versions of classic international hits, mostly of other styles. So How Deep Is Your Love by the Bee Gees became I like Steffi Graf , I Love Rock 'n' Roll became I think Schlager is great , and The Most Beautiful Song Knows Guildo Horn is a cover version of Up Where We Belong .

He appears regularly at the summer festival in the CentrO shopping center in Oberhausen , at “beer exchanges” in the Rhineland and at the Trier old town festival and is an integral part of the program. Since 1994 he has been organizing a Christmas concert every year on December 23rd in the Europahalle Trier .

In 1997 Horn played in two episodes of the RTL daily soap Unter uns . In 1997 he had a small guest role in the movie The First Semester . In 1999 he played the main role of the hairdresser "Toni Schatz" in Washing, Cutting, Laying . The film received mostly bad reviews and was only moderately well received with 18,000 viewers. On television, he then had a guest role on the court show Dispute for Three .

Horn also had engagements in operettas (for example at the Antikenfestspiele Trier) and appearances in television programs. In 2003 he played the role of the ghost in the run-up to Christmas at the Theatro Centro in Oberhausen in performances of the musical Vom Geist der Christmas by Charles Dickens . In the 2004 computer game Rayman 3: Hoodlum Havoc he gave the character Globox his voice.

In 2005 Guildo Horn played in the musical Kiss Me, Kate at the Essen Aalto Theater . In November 2005 a maxi-CD with four rocking Christmas songs was released with the title The Rocky Horny Christmas Show . In 2006 Horn took on the leading role in the new production of the musical Paradise of Pain by Frank Nimsgern at the Trier Theater , which premiered on January 6th. From March 4 to April 9, 2006, Guildo Horn played the live comedy program of Shakespeare's complete works with Obel and Tom Zahner at the Capitol Theater Düsseldorf (slightly shortened) . In November 2007, in singing and 2008 in Trier Horn stepped in to Mozart's Don Giovanni ajar opera adaptation Leporellos diaries on. In it he played and sang the title role of Don Giovanni's servant Leporello, which was positively received by the press.

Also in 2007 Horn took part in the second season of the RTL dance show Let's Dance . With his partner Motsi Mabuse , he took sixth place. He had a supporting role as a bon vivant in episode four in a boat of the ARD television series In allerfreund from December 14, 2010 , and in 2011 he played a journalist in the playback episode of the ZDF series SOKO Cologne . In 2012, 2013 and 2016 Guildo Horn was a guest at Theater Hagen as Riff-Raff in The Rocky Horror Show . In 2011 and 2012, Guildo Horn & the Orthopedic Stockings presented The Christmas Show on the Hagen stage. In 2015 he played the role of butler Alfred in Nutcracker and Mouse King .

From July 18, 2006, Guildo Horn presented the program Guildo and his guests on SWR . The focus of this new talk show format people stood with intellectual disabilities , with whom Horn held talks on issues of each last week. The format was continued after the first two seasons in 2007 with ten more episodes.

For this talk show, Horn and the broadcaster SWR were awarded the BG Paralympic Media Award 2006 in November 2006 and were also nominated for the Adolf Grimme Prize in January 2007 and 2009 . On March 11, 2007, Horn was also awarded the media prize of the federal association “ Bobby ” for people with intellectual disabilities .