The title of this article is ambiguous. Further meanings are listed under Moderator (disambiguation) . 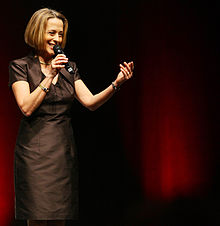 A moderator (from the same Latin word meaning 'moderate', 'leader', 'handler', 'governor'; derived from the verb moderate 'moderate, keep in check , regulate' ) is a person who directs or controls a conversation conveyed a communication . The activity itself is called moderation .

The discussion moderator supports the participants in a discussion group or a panel discussion . He usually greets the audience, introduces the topic of the conversation, the process, the rules and introduces the participants. Often, however, this task also falls to the inviting party (e.g. the manager). Moderators control the individual speeches, pick up on important core sentences, summarize, curb overzealous people, support silence, mediate in conflicts. They direct the handling of the topic and involve the audience. Moderators encourage dialogue by getting those who are silent to speak their minds, summarize findings and open points at the end, thank the participants and say goodbye to the audience if the "manager" or the person inviting them do not do so. To analyze the course of a conversation, some moderators create conversation progress sociograms .

The moderator leads the discussion in discussion groups, for example on radio and television broadcasts . In the case of magazine broadcasts , articles are usually "moderated", which is why they are also referred to as moderators. In general, moderation can be defined here as the transition from one program element to another. Moderators on radio and television conduct interviews (as opposed to conversations); they tell stories about music or events (moderation report), they depict moods (“phatic” moderation), encourage participation, create awareness for and classify topics. The main task of moderators is to create relevance; the reason why a certain topic is taking place in this medium for this target group at this point in time. According to empirical studies in television and radio, moderators are the essential element of bonding for the target groups . In this respect, the moderation of radio broadcasts can also be compared with that of blogs .

With many so-called format radios , moderators are also responsible for announcing weather and traffic jam reports, and the other speeches are often limited to announcements of music titles and promoting their own station. This is happening more and more often (especially during the night) automatically using computer programs. Nevertheless, such moderators often serve as important figures of identification for the respective broadcaster.

"Anchorman" ( English for literally anchor man ; for women also "Anchorwoman", gender-neutral "Anchorperson" or simply "Anchor") is the term used in (US) English-speaking countries to refer to moderators or editors in the television studio who lead through a news program and make comments obtain statements from reporters on site or from interview partners.

In the television news, the term anchorman has established itself as the permanent spokesperson for a news program that characterizes this program. One of the first and best known was Bernard Shaw , who had shaped the role of anchorman since CNN was founded in June 1980; he retired on February 28, 2001 due to age. In Germany, the term became commonplace in everyday language from around 1990: "The new anchorman Ulrich Wickert does not want to change anything essential in the program concept." Anglicism first appeared in 1994 in the Duden. The anchorman deviates formally from the pure news anchor because the latter has no other task “than to read out the news processed by the editorial offices. They are therefore not allowed to evaluate the news through emphasis, facial expressions, gestures or the like. They should be neutral, impersonal and unobtrusive. "In English is the leading presenter of a program, the term" host "( German  hosts in use). In French one usually speaks of the " entertainer ".

In English, either the term “presenter” (British) or “host” (American) is used for the protagonist of a TV entertainment show and no linguistic reference is made to the activity of moderation.

In the German-speaking world, the protagonist of a television program who directs the conversation is referred to as a television presenter, analogous to the radio presenter, and this also applies to programs in which guests are only briefly present and little or no conversation takes place. Johnny Carson coined this type of representation in the Tonight Show from 1962 on American television. As a rule, "moderation" in the German-speaking world describes the aspect that the viewer perceives a person leading through the entertainment show, opposite to whom other people are positioned as guests or helpers.

Some moderators have a classic journalistic training, many are newcomers from other entertainment professions. In the past, presenters were mostly supported by assistants, which are still common today on Italian television under the name Vallette . In the German-speaking world, up until the 1980s, a distinction was made between the conférencier and the moderator. He took over the moderation, but also presented anecdotes , poems and chansons himself.

On the Internet , moderators support participants in web forums in order to settle disputes and to delete, postpone or block unwanted or inappropriate, injurious, illegal contributions (this task, at least removing insults in contributions, is usually carried out by special programs). In Usenet there are so-called moderated newsgroups with a person who initially receives contributions by e-mail and publishes them as postings after checking if they comply with the charter of the corresponding newsgroup. With the help of electronic meeting systems, workshops are increasingly being moderated over the Internet.

Conflict moderators are used to mediate or to return to a factual discussion when situations between interest groups have escalated ( if it is specifically about the regulation of conflicts, one speaks more of mediation ). Methods of group dynamics or organizational development can be used.

In Germany there is no uniform job description for the profession of broadcasting moderator. TV or radio moderators often come from journalistic or artistic ( actor , musician ) professions. Some moderators are also career changers . The classic training in Germany consists of a journalistic traineeship at a radio or television station in front of a microphone and / or camera; Journalism schools and academies sometimes also train moderators.

Those interested in the moderation profession rarely find their way into the media industry as unskilled or at least relevant unskilled lateral entrants, for example through castings . The talents discovered in this way are then trained accordingly by the broadcaster or group of broadcasters who organized the casting. Other career opportunities include promotion jobs or activities as an animator , disc jockey or show moderator in an amusement park, for example .

Team moderators often come from psychosocial professions and are usually trained in group dynamics . But every manager also needs skills as a team moderator. Most learn the methods and techniques through learning by doing . In larger companies, training as a moderator is part of the management development program .