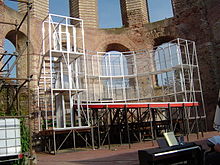 Scene from “Rienzi” in the Trier amphitheater

The Antikenfestspiele in Trier were brought into being in 1998 by the then mayor Jürgen Grabbe and the former artistic director of the Trier city theater , Heinz Lukas-Kindermann . Works from the field of musical theater and drama were performed, the content of which goes back to ancient materials. The antiques festspiele found annually by 2010 in the period from June to July at the Cultural Summer Rhineland-Palatinate instead greeted by a Antiques Symposium of Trier University accompanied.

After the Antikenfestspiele operated as a limited liability company for a time, they were finally re-affiliated with the Trier Theater.

In 2009 the city canceled the festival for financial reasons. During the mandatory break, the festival management developed a new concept. The festival took place for the last time in 2010, with a loss of around 220,000 euros. In November 2010 the city council decided not to continue the Antikenfestspiele. Despite the high artistic quality, the event was unable to establish itself sufficiently. For the city of Trier, in view of its high level of debt, further financing is not responsible.

The Antikenfestspiele performed at the Orff Festival in Andechs with the opera “Antigonae” .

Renowned artists regularly took part in the Antikenfestspiele. a .:

The Antikenfestspiele were an open-air festival. The following Roman buildings served as venues:

In bad weather, the Trier City Theater, the former St. Maximin Church or the Trier Arena served as alternative venues.