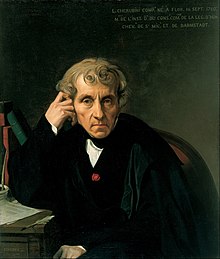 Although Cherubini was greatly admired by his contemporaries, his music is not common these days. Beethoven regarded him as one of the greatest dramatic composers of his time.

During the years in Paris he worked successfully as an opera composer at times. His first major success was the opera Lodoïska (1791), for whose realistic heroism he was admired. This was followed by the horror opera Médée (1797), Cherubini's best-known work, based on revolutionary principles , and Les deux journées ou Le porteur d'eau (1800, The Water Carrier ). His works were performed in the small Théâtre de la foire Saint-Germain , as the (larger) opera house was closed to him. His idealism, his artistic independence, but above all the rigor and the noble character of his music prevented him from becoming popular with his contemporaries. After being appointed inspector at the Paris Conservatory in 1795, his financial situation became bearable.

In 1805 Cherubini received an invitation from Vienna to write an opera and to perform it himself. Faniska was brought on stage the following year and celebrated enthusiastically, especially by Haydn and Beethoven . In 1810 Nicholas II suggested Prince Esterházy Cherubini in Paris to become his personal Kapellmeister and thus successor to Haydn, who had died the previous year. After the Prince's departure, Cherubini composed the monumental mass solenelle per il Principe Esterházy in D minor, which he completed on October 7, 1811. Presumably due to financial problems, the prince later withdrew his offer. 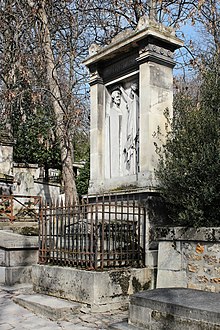 Disappointed because of a lack of success at the theater, Cherubini increasingly turned to church music. He wrote seven masses, two requiums and many smaller works. In the restored French monarchy, he was appointed professor of composition and to succeed in 1816 Jean-Paul Martini Égide to surintendant de la musique du Roi appointed. In 1815 the London Philharmonic Society ordered a symphony, an overture and a composition for choir and orchestra from him, as well as the associated performances in London , which contributed to his international fame.

Chamber music occupies a special position in Cherubini's oeuvre, to which he turned for no apparent external reason. In 1814, during the phase of the master's reorientation away from the opera stage, he wrote his first string quartet , which is best known for his fandango-like Scherzo and which was favorably reviewed by Robert Schumann in his Neue Zeitschrift für Musik ; In 1829 a second, and in 1834–37 he finally wrote the remaining four string quartets and one string quintet in quick succession, which, according to Cherubini's plan, should have been followed by five more. All of these works are characterized by a high degree of originality and technical finesse and form an interesting counterweight to the standard of the quartet repertoire of the Viennese classical music .

In 1822 Cherubini became director of the Paris Conservatory , which he remained until the end of his life. In 1835 he completed his textbook Cours de contrepoint et de fugue ( theory of counterpoint and fugue ). He died in Paris in 1842 at the age of 81.

Cherubini's Requiem in C minor (1816), commemorating the anniversary of the execution of Louis XVI. remembered was a great success. The work was greatly admired by Beethoven, Schumann and Brahms .

With the arrival of the brilliant and exuberant Rossini operas with their vocal “pyrotechnics” in Paris, the strictly classical opera Cherubinis, like the Glucks and Spontinis , went out of fashion. Nevertheless, Médée is occasionally performed. A famous revival in the 20th century was in Florence in 1953 with Maria Callas in the title role and Vittorio Gui at the podium. Another Cherubini opera, Les Abencérages , was performed in Italian at the Maggio Musicale in Florence in 1957 under Carlo Maria Giulinis .

Cherubini's long-lost, unfinished comic opera Koukourgi , whose premiere did not take place in Paris due to the revolutionary turmoil of 1792/93, but whose music Cherubini used for his opera Ali Baba , was found in Krakow in the 1990s and was performed on September 16, 2010 on Stadttheater Klagenfurt premiered in this original form.

In the last few decades Riccardo Muti in particular has taken on Cherubini's music.