Igor Stravinsky at the age of 18

Igor Stravinsky (even Stravinsky ; born June 5 . Jul / 17th June  1882 greg. In Oranienbaum , Russia ; † 6. April 1971 in New York City ) was a Russian composer and conductor with French and American citizenship. He was one of the most important representatives of new music .

His full name in modern transcription is Igor Fjodorowitsch Stravinsky ( Russian Игорь Фёдорович Стравинский , patronymic before the spelling reform Ѳедоровичъ, scientific transliteration Igor 'Fëdorovič Stravinskij ). In English the surname Stravinsky is written, in French there are several spellings next to each other - Stravinsky , Stravinsky and Stravinski . 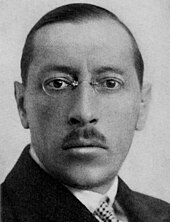 Stravinsky was born in Oranienbaum near Saint Petersburg in Russia in 1882. He spent his childhood and youth in a relatively restrictive environment under the influence of his father Fyodor Stravinsky . Like him, he first studied law in St. Petersburg with a degree in 1905, but was then a student of Rimsky-Korsakov .

In 1906 he married the Russian Yekaterina Nossenko, with whom he had two sons and two daughters (1907, 1908, 1910, 1914). She was a student at the Académie Colarossi in Paris , where she trained her “great talent for drawing”. In 1923, for the performance of Stravinsky's Les Noces (“Peasant Wedding”), she illustrated the text for the composition with “pretty watercolors with strong colors”.

Stravinsky's thirst for discovery lasted all his life; he exhibited a relentless desire to learn and research about art, literature, and life itself. His Russian environment, with its inward cultural life, which seemed restricted and provincial to him, increased his desire for the outside world. In 1910 he traveled to Paris for the first time, where the ballets Der Feuervogel (1910) and the follow-up works Petruschka (1911) and Le sacre du printemps (1913) were performed. Not least because of the Bolshevik Revolution, Stravinsky had lived in France since 1920; In 1934 he became a French citizen.

He made three trips to America: 1925, 1935 and 1937. In 1939 his wife died. Due to the war he left France and in 1940 went to the USA for good , where he married his long-time lover, the painter Vera Soudeikina de Bosset . For the rest of his life his second wife increasingly supported him in the initially strange environment; numerous stories tell of their tireless efforts for his well-being and the calm he needed to compose. Stravinsky had got used to life in France; It was difficult for him to emigrate to America at the age of 58, even if he acquired the citizenship of the United States in 1946 . For a while he maintained a circle of friends who had emigrated from Russia, but realized that this would not support his artistic and professional work in the USA.

When he was planning an opera with WH Auden , Stravinsky - still unfamiliar with the English-speaking world - met the composer and musician Robert Craft , who stayed with Stravinsky until his death and as his translator, chronicler, assistant conductor and factotum for innumerable musicals and social duties acted.

Stravinsky worked intensively on his work with Ernest Ansermet : the Swiss conductor conducted seven world premieres for Stravinsky between 1918 and 1930. Stravinsky's turn to twelve-tone music from 1952 onwards, however, took a critical look at The Basics of Music in Human Consciousness .

Igor Stravinsky died on April 6, 1971 in New York; At the composer's request, the funeral mass and burial took place in the San Michele cemetery in Venice , where his second wife is also buried.

He initially wrote works in the late Romantic - Impressionist tradition ( The Firebird ) , then he turned to a completely new tonal language (dominant rhythm, lack of melodies, revolutionary new chords: Le Sacre du Printemps , Histoire du soldat ), then he wrote in the neoclassical style ( see Béla Bartók ). Important stylistic device of his music were up to the Second World War, the polytonality and a distinct rhythm , sometimes quotes of popular music . Stravinsky also composed serial music in the 1950s . Many different influences can be found in his music, which he fused into a distinctive style.

His most famous works come from his early Russian period: The Firebird , Petrushka and Le sacre du printemps . These ballets practically led to a renaissance of the genre. Stravinsky also wrote for a wide range of ensemble combinations and classical forms. His work ranges from symphonies and operas to piano miniatures.

Stravinsky also achieved fame as a pianist and conductor , often with premieres of his own works. He also worked as an author. With the help of his protégé Robert Craft , who supported him with regard to the English language, Stravinsky created a theoretical work Poetics of Music . In it he makes the popular claim that music "can express nothing but itself". Craft also translated various interviews with the composer published as Conversations with Stravinsky .

In his memoirs, Stravinsky describes in great detail his musical development up to the psalm symphony and the dance melodrama Persephone . It all started with piano lessons . He quickly learned to read sheet music and improvise on the piano, and he studied the scores of Russian operas from his father's library. After graduating from high school, he reluctantly studied law in accordance with his parents' wishes, and was finally allowed to take harmony lessons on the side. Independently of that, he studied independently from the age of nineteen with great satisfaction the doctrine of counterpoint using a standard textbook. The further development is reflected in his works, the processes of which he describes in great detail in his memoirs. The contact and exchange with the people who accompanied his development and whom he characterized - above all Rimsky-Korsakov and Diaghilew - were of great importance to him . Stravinsky understood his musical creative process in a very unromantic way. He aimed for a rational understanding of his music in the audience and did not want to create feelings. Accordingly, he asked the conductors and performers to reproduce his compositions precisely and faithfully to the work, without having to interpret them himself. He reacted incomprehensibly to critics of his later works, who set the style of the earlier works - especially the Sacre du printemps - absolutely and were not prepared to accept his further developments.

As a cosmopolitan Russian, Stravinsky was one of the most important composers of the 20th century both in the West and in his homeland. In his Philosophy of New Music (published in 1949), Adorno presented the composer as the outstanding representative of an attitude that was exactly the opposite of Schönberg's position , which gave him great respect for his compositional skills. With regard to the message of music, the positions of Adorno and the composer are similar. On the other hand, Adorno criticized the style of neoclassicism in general as a " decoction of already existing music ". The only potentially positive thing about this is that knowledge is gained from the fact that the moment of decay of classical music becomes more apparent.

Stravinsky also became known to a wide audience through the film Fantasia (1940), in which Walt Disney and his artists converted the music from Le Sacre du Printemps into images in the creation and dinosaur sequence.

The American composer / educator Robert Strassburg (1915–2003) was one of his students . 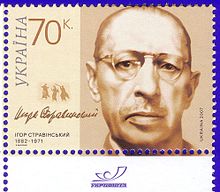 A large part of the Stravinsky estate is now in the Paul Sacher Foundation .

In addition, the dates would have to be given according to the Julian and Gregorian calendar

The Strawiński family with the Sulima coat of arms belonged to the Polish landed gentry and probably originated from Troki in Lithuania , where members of the family are documented from the middle of the 17th century. The secure family of the composer Stravinsky begins with his grandfather Ignacy Stravinsky. He was still Catholic , but no longer had his own property. He hired himself as a manager of the Nowy Dwor estate near Homel and died in his daughter's house in Tbilisi . The grandmother, as well as all of the children and grandchildren, were Orthodox .

Igor Stravinsky himself was a family man who devoted a considerable amount of his time, efforts, and expenses on his sons and daughters. But soon he began an affair with his later second wife Vera, whereupon she left her husband. From this point on, Stravinsky led a double life until the death of his wife Yekaterina , in which he divided his time between his first family and Vera. Ekaterina soon found out about the relationship and accepted it as inevitable and permanent. Nevertheless, after his death there was a dispute over his property and his performance rights.

Stravinsky's ability to get commissions is striking: many of his works since the Firebird were composed and paid for for special occasions. Stravinsky thus avoided the problem many composers had of having to accept a normal job.

Stravinsky often showed himself to be an experienced “man of the world”. In contrast to other composers of his time, he acquired a keen sense for business matters. However, its copyright problems are also legendary.

Otto Klemperer described Stravinsky as cooperative and uncomplicated. At the same time, Stravinsky displayed an aristocratic disdain for the socially marginalized: Robert Craft was embarrassed by Stravinsky's habit of loudly demanding attention in restaurants with a fork on a glass.

Stravinsky had a wide range of literary tastes which reflected his constant desire for new discoveries. The texts and literary sources of his work began with an interest in Russian folklore , ranging from classical authors and the Latin liturgy to contemporary French ( André Gide , Persephone ) and English literature (Auden, TS Eliot ), the English Bible in the " King James Version ”from 1611 and medieval English poetry. Towards the end of his life, he even used Hebrew script in Abraham and Isaac . In his later years he was an avid fan of the game Scrabble .

Aspects of Stravinsky's life are the subject of the film Coco Chanel & Igor Stravinsky , which was presented at the Cannes Film Festival in 2009 and was released in cinemas on April 15, 2010. It is about the passionate love affair between Stravinsky and Coco Chanel , portrayed by the French Anna Mouglalis and the Dane Mads Mikkelsen under the direction of Jan Kounen .