The title of this article is ambiguous. A description of the mythical creature can be found under Firebird . 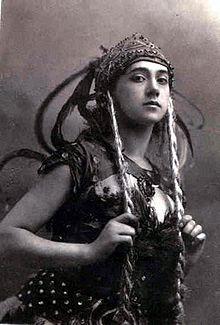 Tamara Karsawina as a firebird, 1910

The Firebird ( Russian Жар-птица / Zhar-Ptiza , French L'Oiseau de feu ) is a ballet in two acts with music by Igor Stravinsky based on the libretto by Michel Fokine . The world premiere took place on June 25, 1910 in the Paris Théatre National de l´Opéra by the Ballets Russes ensemble . The music for the Firebird is considered to be a trend-setting work at the beginning of the 20th century.

The plot is based on the two Russian folk tales The Firebird with the figure of the fairy tale hero Ivan Tsarevich and The Magician Kastschej with the mythological figure of the immortal Koschtschei . The young Prince Ivan hunts the firebird and gets into the garden of the magician. He catches the bird on the miracle tree, which complains and asks for its freedom. When the prince grants him this, he receives a feather as a thank you, which has magical powers and which, in danger, calls the firebird.

Thirteen virgins, held captive by the magician Kastschej, come into the garden and dance around the tree. Among them is the princess Tsarevna, with whom Ivan falls madly in love. Threatening signals herald the appearance of Kastschej and his demons. They harass Ivan Tsarevich and want to kill him. In dire need he calls the firebird with the feather he has given. He comes and forces Kastschej and the demons to dance with magical music and then sings them to a deep sleep with a song.

The firebird shows Ivan the giant egg hidden in a cave under the roots of the wonder tree, in which Kastschej keeps his soul. The prince breaks the egg, the magician's power fades and he dies. His captive and petrified victims are now set free, including the thirteen virgins. Princess Tsarevna and Ivan Tsarevich are united. 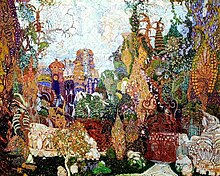 Alexander Golowin: Draft for the set of the firebird

The work was commissioned by Sergei Pawlowitsch Djagilew for the Ballets Russes , with which the success achieved by the company in Paris in 1909 was to be built on. Originally, Anatoly Lyadow was planned for the composition , but since he hesitated to accept, Djagilev handed the commission to Igor Stravinsky, who was largely unknown at the time, in December 1909. The scenic plot, the libretto, was created by Michel Fokine , one of the most important dancers and choreographers of the Ballets Russes. The combination of Russian fairy tale tradition with effective stage appearances, such as the shining firebird, the wonder tree, the giant egg and double-headed monsters, had a great impact on the Parisian audience. In the criticism, the ballet was described as a "glittering, sensual appearance", underlined by a "lush, colorful decor" and the "music that shimmered in all timbres".

The world premiere on June 25, 1910 at the Théatre National de l´Opéra in Paris was conducted by Gabriel Pierné , the equipment was provided by Alexander Golowin and Léon Bakst . Tamara Karsavina danced the firebird , Fokine himself danced Ivan Tsarevich, his wife Vera Fokina the Princess Tsarewna and Enrico Cecchetti the magician Kastschej.

Stravinsky later made several versions of the score for concert performances: