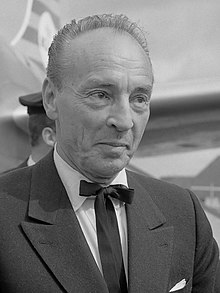 At the age of nine, Balanchine - son of the composer Meliton Antonovich Balantschiwadze and brother of the composer Andria Balantschiwadze - began his training at the imperial ballet school in Saint Petersburg and studied music at the Saint Petersburg Conservatory . He began working as a choreographer during his training: his first piece was La Nuit (around 1920), a pas de deux for himself and a classmate to the music of Anton Rubinstein . In 1921 he graduated with honors and became a member of the corps de ballet of the former St. Petersburg Mariinsky Theater, which was then renamed the State Opera and Ballet Theater . With some colleagues he founded a small dance ensemble in 1923, with which he performed experimental pieces, which were viewed with suspicion by the authorities. The dancers were threatened with firing if they did not break up their group.

When Balanchine, together with fellow dancers Tamara Geva , Alexandra Danilova and Nicholas Efimov, received an exit permit from the newly founded Soviet Union in 1924 for a Western European tour , none of them returned home. During a performance in London they caught the eye of the impresario Sergei Djagilew , who hired them all for his Ballets Russes . This was the beginning of Balanchine's international career.

He worked for the Ballets Russes until they were dissolved after Djagilev's death in 1929, first as a dancer, then after Bronislava Nijinska's departure as a ballet master and choreographer. During the time with the Ballets Russes, various groundbreaking choreographies were created, including a. the masterpiece Apollon musagète and The Prodigal Son . A knee injury he sustained during this time limited his dancing skills and may have contributed to his focus on choreography.

After the dissolution of the company and strenuous work for the subsequent founding of the Ballets Russes de Monte Carlo , he founded the Les Ballets 1933 company in 1933 . During the short life of this troupe, he met the young American patron Lincoln Kirstein in London , who wanted to set up a ballet company in the USA that was independent of Europe with American dancers, his own choreographies and his own themes. Balanchine insisted on first establishing a ballet school, the School of American Ballet (founded in 1934), from which the American Ballet Theater emerged . The school still exists today, training dancers for the New York City Ballet and other large companies.

The American Ballet found accommodation at the New York Metropolitan Opera . During Balanchine's work there from 1933 to 1938, groundbreaking ballets to the music of Igor Stravinsky were written . The American Ballet remained for three years as a ballet troupe of the Metropolitan Opera, which led to tension, since the focus here was on opera and full-length ballets were rarely included in the program. In 1938 Balanchine and his dancers separated from the Met and the troupe disbanded after a few short tours. Balanchine worked on several smaller projects, including again together with Stravinsky on the Zirkuspolka , a choreography for the Ringling Brothers Circus .

This was followed by a brief episode of resumed work for the Ballets Russes de Monte Carlo and then in 1946 the founding of the Ballet Society, which introduced Balanchine's new works on a small scale, which led to the company being allowed to join the cultural institution New York City Center when New York City Ballet . Balanchine worked here until his death in 1983 and was able to present his works to a large audience. His extensive work and his importance for the development of dance are recognized worldwide. Balanchine's grave is in Oakland Cemetery in Sag Harbor on Long Island.

He created a total of 425 individual choreographies, mainly for ballet theater, but in the 1930s and 1940s also for musicals, revues and films. His choreography for The Boys from Syracuse (1938) and the dance sequence in Slaughter on Tenth Avenue in the musical On Your Toes (1936) set new standards. Since then, dance has become an integral part of musical operations. From the 1960s onwards, he also used the possibilities of television, set up choreographies for the camera and thus brought his work to an audience of millions.

Balanchine put the classical ballet training in the service of the free form and thus came to new possibilities of expression. There are narrative ballets by him, but many important works are abstract and explore movement patterns and the shapes of the bodies in space to the music. Dance is an art form in itself that does not have to be subordinate to any other medium, not even a linear story: the visual sense outweighs everything. However, this was not true of his opinion when it was about dance to music: “Music is the ground we dance on.” Changes in tempo were not desired, and there was no adaptation to the dancers' abilities and fitness as is often the case. He assumed strength, speed and precision.

Balanchine created many choreographies for the music of contemporary composers such as Schönberg , Stravinsky and Prokofiev . He was extremely musical and through his father, a composer, came into contact with music and making music very early on. During his dance studies he also studied piano, music theory and composition for three years at the Petersburg Conservatory . For choreography he made his own piano reductions from the orchestral scores. He and Igor Stravinsky had a friendship and a congenial creative relationship that went back more than 50 years, which was also based on Balanchine's deep understanding of music. As a choreographer he was known for his calm and focused way of working.

The George Balanchine Monument in Tbilisi