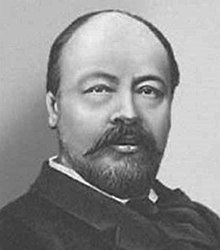 Lyadov grew up motherless. Since he showed musical talent at an early age, his father - conductor at the St. Petersburg Mariinsky Theater - gave him his first lessons before he began his studies at the St. Petersburg Conservatory in 1870 . Here he received mainly lessons from Nikolai Rimski-Korsakow , with whom he remained friends throughout his life. Although he was temporarily excluded from teaching due to indiscipline, he completed his studies very successfully in 1878 and in the same year became a lecturer in harmony at the St. Petersburg Conservatory. A year later he began to conduct the concerts of the Petersburg Amateur Music Society. In 1884 Lyadow married and became a lecturer at the newly founded Belajew music publishing house . From the following year he taught at the Petersburg court orchestra. In 1901 he also became a lecturer in counterpoint at the Conservatory, which he temporarily left in 1905 in response to Rimsky-Korsakov's dismissal. In the same year he resumed teaching and became professor of composition in 1906, which he remained until his death. Many of his students developed into well-known composers; the most famous were Sergei Prokofiev and Nikolai Myaskovsky . In addition to his work as a composer and teacher, Lyadow also emerged as a draftsman.

Lyadow was a member of the so-called "Second Petersburg School", a circle of composers in the succession of the " Mighty Heap " around the patron Mitrofan Belyayev , who was therefore also called " Belyayev Circle ". Accordingly, Russian folk music played a major role for him - he was active as a collector and arranger of folk songs. His piano work, which takes up the majority of his oeuvre, is seldom directly inspired by folk music, but rather ties in with Frédéric Chopin . From around the turn of the century, Lyadow was also influenced by Impressionist color schemes and Alexander Scriabin , whom he was no longer willing to follow after his fifth piano sonata. Significantly more than the majority of his piano music, his orchestral works are based on Russian folk music. As mentioned, Lyadow composed mostly piano miniatures and a few short orchestral pieces; Although he undoubtedly had great talent, a not always happy upbringing meant that he was characterized throughout his life by a certain laziness and indiscipline that made him shy away from larger, more labor-intensive projects. He wrote an opera for decades without making any significant progress; the Russian choreographer Sergei Djagilew commissioned him in 1909 to compose a ballet called The Firebird ; When Lyadov had only bought the appropriate music paper after a while, Dhiaghilev handed the order to the young Igor Stravinsky . Lyadov's compositions are captivating due to their superior mastery of the compositional craft as well as differentiated colors, which sometimes even include a tendency towards the grotesque. 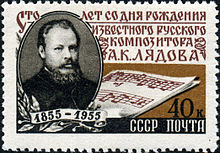 Soviet postage stamp (1955) - with a portrait of Lyadov and an excerpt from the symphonic work Eight Russian Folk Songs .

In 1955, the Soviet Post issued a special stamp to mark Lyadov's 100th birthday . Since 1987 he has given its name to the Lyadow Glacier on Alexander I Island in Antarctica.