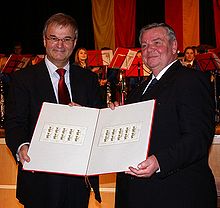 Presentation of a special stamp by the Parliamentary State Secretary to the Federal Minister of Finance, Karl Diller (l.)

A special stamp is a postage stamp that is issued in a limited edition by the post office. Your motif usually depicts a special occasion. Special stamps are issued as individual stamps or more rarely as a series of stamps. Stamp blocks usually also consist of special stamps.

Commemorative stamp on the occasion of the 80th birthday of Emperor Franz Joseph on August 8, 1910 by Koloman Moser

Commemorative stamp for the 20th anniversary of German unification in 2010

Commemorative tokens are usually issued shortly before the anniversary or the event to be celebrated. The associated first day cancellation is usually also given in a location appropriate to the occasion , apart from in the capital of a country , such as B. the birthplace of the honored personality. In this case the philatelist speaks of a local first day .

If commemorative stamps are issued in a block, it is strictly speaking a memorial block . However, such a designation is unusual even among philatelists.

Advertising stamps are special stamps that are issued as advertising for upcoming major events, institutions and the like. This can be, for example, an issue on the occasion of an upcoming or currently taking place soccer world championship . However, if a special stamp were to refer to a specific game, it would be a commemorative stamp. In contrast to commemorative stamps, there are rarely local first days for advertising stamps.

Philatelists usually refer to advertising stamps as special stamps. However, this can lead to confusion. More rarely, they are also referred to as propaganda stamps. Names such as advertising block are also rarely used. 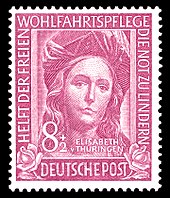 Sometimes special stamps are sold by the post office at a higher price than the face value. The philatelist speaks of a "surcharge", an amount of money to be paid in addition to the actual postage . It may not exceed 50% of the nominal value, otherwise philately speaks of a harmful expenditure . Usually the supplement is used for charitable purposes. If this purpose is noted on the special stamp, it is called a charity stamp or welfare stamp.

A recent example is the postage stamp “Football World Cup 2006 - Football Globe” , which appeared in 2005 . It has a face value of 55 cents - at that time sufficient for a standard letter - but cost 80 cents. The German Sports Aid Foundation received the difference of 25 cents . Another example is the special “Flood Aid 2002 ” stamp (56 cents + 44 cents), which was awarded to the victims of the Elbe flood of the century .

The Pro Patria and Pro Juventute brands have a long tradition in Switzerland.

The surcharge can also be used to finance other activities worthy of support, such as exhibitions , associations and the like. In this case, the surcharge mark can also be a commemorative mark or an advertising mark. For example, an international stamp exhibition can be advertised and a surcharge on postage can be levied at the same time.

First special stamp in the world from Peru , 1871

The world's first postage stamps were issued in Great Britain on May 6, 1840 . In the following years, the invention should spread around the world. However, these stamps were exclusively definitive series, mostly showing the head of state , a coat of arms or a drawing of numbers . It was not until 1871 that the world's first special stamp was issued in Peru . The postage stamp issued in April 1871 shows a locomotive . The issue coincided with the 20th anniversary of the opening of the Peruvian Railway. Whether it was intentional or coincidental is not certain, as it is just as likely that the supposed special stamp was only intended to compensate for the cheaper rail postage. The first stamps, clearly designed and issued as special stamps, were issued by New South Wales in 1888 to mark the 100th anniversary of the landings of the first British settlers.

The Olympic Games 1896 stamp series was issued in Greece in 1896 , and it contributed significantly to the financing of the Games. Little by little, the advertising effectiveness of postage stamps was increasingly recognized. Numerous states followed suit by issuing special stamps. In 1897, special stamps as well as commemorative stamps were finally allowed in international traffic as part of the International Postal Congress in Washington, DC .

Postage stamp on the death of Reinhard Heydrich (1943)

However, the promotional effectiveness of the special stamp was soon abused. Above all, dictatorial states such as the National Socialist German Reich , but also North Korea and the GDR used the motifs on the postage stamps, especially that of special stamps, as space for their propaganda. During the Second World War , the German Reich also received a not inconsiderable amount of money, as the propaganda stamps were sold to collectors at high surcharges. An example of this is the commemorative stamp on the occasion of Hitler's 55th birthday , which had a face value of 54 Pfennig, but was sold for 1.50 Reichsmarks . The special Lenin stamps that appeared in large numbers in the Soviet Union were also particularly pronounced . 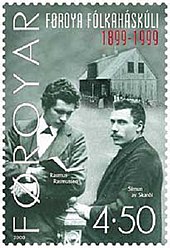 Many countries today use special stamps as a way of presenting themselves. Before the Second World War, special stamps were comparatively rare, but today they are far more common than definitive stamps. Special stamps were and are made with collectors in mind as potential buyers. The effect of their optically appealing design, which promotes letter writing, is also aimed at occasional customers .

Small states in particular generate a not insignificant share for the treasury with the issue of special stamps of popular motifs. However, some small states like the Faroe Islands remain true to their country-specific motives. The development of showing popular motifs on special stamps without reference to the country can now also be observed increasingly in Austria .