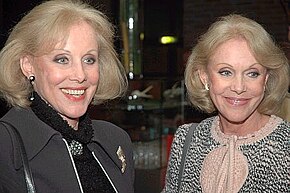 Alice and Ellen Kessler (born August 20, 1936 in Nerchau , Saxony , bourgeois Kaessler ) are a famous pair of twins in German show business . They came to be known as the Kessler Twins and performed as singers , dancers , actresses and entertainers. For a long time they were counted among the most beautiful women in the world.

The parents of the identical twins, the mechanical engineer Paul Kaessler and his wife Elsa - both interested in music - encouraged the girls at an early age and sent them to classical ballet lessons when they were six . In 1947 the children's ballet of the Leipzig Opera accepted the sisters, and in 1950 they passed the entrance exam for the opera dance school there. In 1952 they used a visitor visa to flee the GDR to the Federal Republic , where their father was already living in Düsseldorf . The twins got their first engagement as dancers in the Palladium revue theater there .

It was there in 1955 that the director of the Paris Lido , Pierre Louis Guerin , saw her and engaged her in his world-famous vaudeville show on the Paris Champs-Élysées . There they celebrated great successes that were later only achieved by another German, Marlène Charell . In 1960 the sisters went to Italy, where they were the first women to “show their legs” on television (even if they were still in thick, opaque tights at that time ). In France they also changed their family name from Kaessler to Kessler .

Film and ballet in Germany

The film career of the Kessler twins also began in 1955. They got their first role together in the comedy Solang 'there are pretty girls . Several feature films followed, also in Italy and France. Among other things, she worked in the German films Vier Mädels aus der Wachau (1957 - together with Isa Günther and Jutta Günther ), Der Graf von Luxemburg (1957) and Die Tote von Beverly Hills (1964). In addition to their film engagements, the Kessler twins appeared in numerous television shows at home and abroad. The highlights included appearances on the Perry Como Show in 1963 and in the Rolf Harris Shows in 1967 and 1971. As they got older, they shifted their activities to more demanding engagements. In 1976 they appeared at the Munich Gärtnerplatztheater as "Anna I" and "Anna II" in the ballet The Seven Deadly Sins of the Petty Bourgeois by Bertolt Brecht and Kurt Weill . This made it possible to realize the long-planned idea of ​​having a girl with a split personality represented by twins.

In the late 1950s, the record industry also began to take an interest in the twins. In 1958, the record company Telefunken recorded the first single with Alice & Ellen Kessler, which received little attention. In 1959, at the instigation of the music producer Gerhard Mendelson, the largest German record company Polydor signed the duo and released twelve duet singles and six records by 1963, which they sang together with Peter Kraus as the vocal trio Alice, Ellen & Peter. While the duet records remained unsuccessful, three titles with Peter Kraus reached the top 50 of the German hit lists, with the song Honey Moon in 1960 achieving the best placement at number 15. In 1959 Alice and Ellen Kessler took part in the 1959 Eurovision Grand Prix for Germany . With their contribution Tonight we want to go dancing they reached eighth place out of eleven participants, the title was not published afterwards. In addition to the German productions, the Kessler twins also recorded records in French and Italian. In Italy they were particularly successful with their song Da-da-um-pa . The Italian-language version became the theme song for the RAI television series Studio Uno . In connection with their record productions, the Kessler twins moved from Paris to Munich in 1961. After their single Schotten-Twist / Ja, ja die Liebe , Alice and Ellen ended their recording careers in Germany in 1963, but continued in Italy until the 1980s.

At the age of 40, the twins were photographed for the Italian edition of Playboy . The edition was sold out within a very short time. In Italy , where they had their permanent residence from 1962 to 1986, Alice and Ellen Kessler (“Le gemelle Kessler”) were long considered television icons. The Kessler twins were also in demand in the USA . Many well-known Hollywood personalities like to be seen with the "German girls", including Frank Sinatra , Burt Lancaster and Elvis Presley . In 2009 the Kessler twins performed together with Bill Ramsey , Max Greger and Hugo Strasser , who together with the SWR big band formed the "Swing Legends". The twins have been living in a house in the prominent Geiselgasteig district in Grünwald in the Munich district since 1986 .

The artists were awarded the Golden Rose of Montreux and the Federal Cross of Merit on Ribbon (1987). They received the Premio Capo Circe for their services to German-Italian understanding . Her birthplace Nerchau made her honorary citizenship on the occasion of her 70th birthday in 2006 .