Lale Andersen in her garden in Zollikon , around 1951

Lale Andersen , actually Liese-Lotte Helene Berta Bunnenberg , married Beul (born March 23, 1905 in Lehe (now Bremerhaven ), †  August 29, 1972 in Vienna ) was a German singer and actress. She became world famous through the song Lili Marleen . Under the pseudonym Nicola Wilke, she also wrote lyrics herself, a. a. for their post-war hit Blaue Nacht am Hafen .

Lale Andersen was born and raised in Bremerhaven as the daughter of a ship steward. At the age of 17, she married the painter Paul Ernst Wilke († 1971). Between 1924 and 1929 the couple had three children: Björn, Carmen-Litta and Michael Wilke . The young mother took acting and singing lessons and eventually left her family to go to Berlin . The marriage ended in divorce in 1931. The children grew up with relatives and in homes. In the same year she appeared (still under the name Liese-Lotte Wilke) for the first time at the Deutsches Künstlertheater Berlin . Further engagements at various Berlin theaters followed. In 1933 she got an engagement at the Schauspielhaus Zurich , where she met and fell in love with the Swiss composer (and later artistic director) Rolf Liebermann . Engagements followed, including at the Münchner Kammerspiele . In addition, she performed folk songs , chansons and hits on cabaret and cabaret stages ( ping-pong , Simpl , Cabaret der Komiker , Groschenkeller), at that time already under her stage name Lale Andersen .

In 1937, she met the pianist and conductor Carl Friedrich Pasche in Heidelberg , who was her piano accompanist on all tours and for all recordings from 1937 to 1943 or who was in charge of the recordings. Drafted into the Wehrmacht in 1943, Pasche had to part with Lale. After the war she found other piano accompanists.

Lale Andersen in the Comedians ' Cabaret , 1938 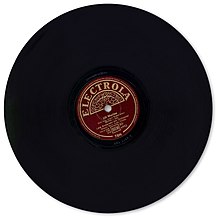 In 1939 she recorded the song Lili Marleen , which had already been written by Hans Leip in 1915 and set to music by Norbert Schultze , under the title Song of a young guard (Electrola EG 6993). During the Second World War , Lili Marleen was broadcast across Europe via the Belgrade soldier broadcaster and heard on both sides of the fronts, but was later temporarily banned by the German Nazi regime because of the "morbid and depressive" text and its "defensive effects". It was broadcast on the front channels before the end of broadcast at 10 p.m. The great popularity of the original German version of the soldier's song alone brought sales of around two million records; the song became the first million seller in German record history.

In 1942, Lale Andersen appeared in the UFA movie GPU directed by Karl Ritter as the singer of the Swedish song Svarte Rudolf . In the same year she sang for the troop support under the accompaniment of Heinz Wehner and his band in Oslo. At the end of September 1942, after the success of the song Lili Marleen had become suspicious of the Reich Chamber of Culture and the Ministry of Propaganda, Lale Andersen herself fell out of favor with the political rulers: she had refused to take part in a tour of the Warsaw ghetto and sent her private letters to emigrants Switzerland had become known. On September 16, she was expelled from the Reich Chamber of Culture with immediate effect, her recordings were no longer allowed to be broadcast on the radio and were to be removed from the archive except for Lili Marleen's "original record" .

Because of this forced inactivity, the BBC made a false report that Andersen had been sent to a concentration camp. As a result, the National Socialists felt compelled to make a violent denial and allowed Andersen to appear in public. However, she was prohibited from singing Lili Marleen ever again. In May 1943, her performance ban was partially relaxed; but she was strictly forbidden to sing in front of soldiers or to connect in any way with her successful song. Instead, according to the order of the Reich Chamber of Culture , she had to be ready for the Propaganda Ministry at any time in order to sing English records ("Propagandajazz") for the Radio Policy Department . She withdrew to the island of Langeoog on invitation and stayed there until the island was taken over by the Canadian army.

As an interpreter of chansons and shanties, she went on successful international tours after the war. Her tart timbre and the unaffected nature of her performance always remained characteristic. 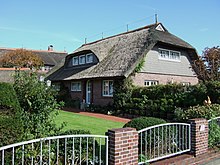 Lale Andersen's house on the North Sea island of Langeoog

In 1949 she married the Swiss song composer Artur Beul and remained connected to him until her death. Beul wrote around twenty songs for her, including Hey, are you on fire, sailor? , Lieselott from Bremerhaven , The fishermen from Langeoog , With two eyes like yours and the gospel-like song Moses, Moses .

In 1956 she sang in the film … As before , Lili Marleen (directed by Paul Verhoeven ) the songs Lili Marleen and Südseenacht . Likewise, Lili at an international veterans' meeting in front of 16,000 participants in the African war . In 1958 she took part unsuccessfully in the German preliminary decision for the Eurovision Song Contest . In 1961 she entered the German preliminary round of the Eurovision Song Contest with the song Once we see each other again , won and represented Germany at the Eurovision Song Contest in Cannes . She came in 13th out of 16 participants. In 1968 Lale Andersen managed to get into a hit parade once, with chains made of amber , for several weeks at the hit derby on Deutschlandfunk, moderated by Carl-Ludwig Wolff. This single was released on the Columbia label (C 23 753).

In addition to the films mentioned, Lale Andersen appeared with her songs and hits in numerous television programs and major shows until 1970 (nine times in the popular Haifischbar ). The director Truck Branss shot a portrait in music with her in 1964 . In 1968 she played the alleged perpetrator in the television thriller One Misses at the spa concert directed by Jürgen Roland . In 1969 she took part in Peter Zadek's Der Pott and sang the idiosyncratic anti-war song Carry them gently (Die Kugel) . In 1970 Truck Branss shot a musical portrait of her adopted home Langeoog with her, during which she sang Low German songs.

Published in 1972 Lale Andersen's autobiography The sky has many colors , in the mirror - bestseller list was performed. Shortly afterwards she died in Vienna of liver cancer . She was cremated in Vienna and the urn was buried in the Langeoog dune cemetery. 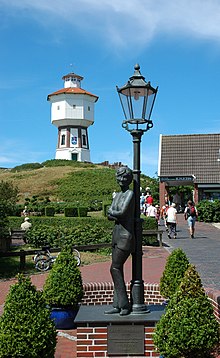 Memorial to Lale Andersen and Lili Marleen on Langeoog

In 1980 Rainer Werner Fassbinder shot the film Lili Marleen with Hanna Schygulla in the lead role: a film which, according to the credits, is based on the autobiography mentioned, among other things. In the words of Lale Andersen's last husband Artur Beul, however, the film plot has little in common with her real life and does not give a clue of the artist's temporary problems under National Socialism.

Lale Andersen's house, the Sonnenhof, is located on Langeoog . Her eldest son, Björn Wilke, ran a boarding house in the Sonnenhof until he sold the property. Thereafter, a tea room and restaurant were operated in the front building, which was decorated with memorabilia from Lale Andersen. Today it is used as a holiday home. A cast-iron lantern that was dedicated to her has stood in Bremerhaven since 1981. Finally, on March 23, 2005 - her 100th birthday - a bronze statue of the goldsmith Eva Recker was unveiled in her honor on Langeoog .

Because Lale Andersen's 1939 version of Lili Marleen was the first German record to exceed the million mark in sales, and because the artist also - according to the composer's opinion - sang the best version of A Ship Will Come (Les enfants du Pirée / Never on Sunday) , she was included in the "list of the most famous personalities of the 20th century" by the American news magazine Time . Lale Andersen can therefore be described as one of the few German world stars .

She has recorded songs from the Threepenny Opera (1958), Low German folk songs (1961) and international folk songs (1965). Her pseudonym as a songwriter was Nicola Wilke , under whom she translated a number of well-known songs or wrote them herself ( play 'me an old melody , Bésame mucho , La Seine , Destiny , Sunset Boulevard and many others). After some of her song translations (such as Bewitched / Verliebt , South of the Border / Mexican Serenade or La vie en rose / Please don't look at me like that ) were rewritten by Ralph Maria Siegel and used by his music publisher at the end of the 1940s , Lale Andersen stopped singing these songs in public “out of revenge”.

In 1999 the Sparkasse Bremerhaven founded the Lale Andersen Prize .