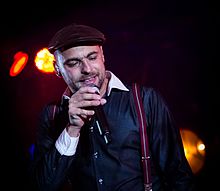 Maximilian Nepomuk "Max" Mutzke (born May 21, 1981 in Waldshut-Tiengen ) is a German singer , songwriter and musician . Its spectrum ranges from pop and rock to soul and funk to jazz . He took part for Germany in the 2004 Eurovision Song Contest and finished eighth.

Mutzke was born in 1981 in Waldshut-Tiengen in southern Baden, the son of an actress and a gynecologist , and has five siblings. The jazz trumpeter Menzel Mutzke is his brother. Max Mutzke has four children with his partner Nazu, who comes from Eritrea . The family lives in Waldshut-Tiengen.

Max Mutzke began his singing career in radio - band Project Five. He had his breakthrough in 2004 when he won SSDSGPS (Stefan is looking for the Super Grand Prix star) , a casting show that Stefan Raab organized as part of TV total . In the final broadcast on February 19, 2004, Mutzke won the telephone vote and prevailed over the two remaining competitors. According to his own statement, a friend signed him up for the casting because he was not interested in big casting shows like Deutschland sucht den Superstar .

With the song Can't Wait Until Tonight written and produced by Raab , he made it straight to number one in the German charts. This fulfilled the condition for participation in the German preliminary decision for the Eurovision Song Contest , for which a placement in the Top 40 of the Media Control Charts was specified.

In the German preliminary decision on March 19, 2004, Max Mutzke prevailed against nine other applicants, including Sabrina Setlur , Patrick Nuo , Overground , Wonderwall and Laith Al-Deen , who collectively received 34% of the votes. In the final vote of the audience by phone and SMS , he defeated Scooter with a majority of 92.05% and on May 15, 2004 represented Germany at the Eurovision Song Contest 2004 in Istanbul , where he finished eighth.

In 2010 he co-wrote the song I Care for You by Jennifer Braun , which she sang in the finale of Our Star for Oslo .

After graduating from the commercial high school in Waldshut-Tiengen in June 2004, Mutzke worked with his producer Stefan Raab on his first album, Max Mutzke . The first single was released in November 2004 in black and white - a song that he recorded with his funk band Project Five in 2002 and that is dedicated to his girlfriend. The album was released in January 2005 and entered the German album charts at number one. It stayed in the top ten for six weeks. The first concerts arranged for the press in Cologne and Hamburg followed shortly after the album was released. Due to the great demand there was an additional concert in Hamburg. A club tour followed from May to June 2005 with 22 appearances in Germany and Switzerland.

In 2006, the single Mein Automobil was released , which made it into the top 30 of the charts. In June 2007 Mutzke's second album was released ... from the stomach . Most of the songs were again written in the Mutzke / Raab constellation, and the album was produced by Stefan Raab. Jazz influences were added to this album for the first time, and Mutzke also played the drum parts for the first time on some tracks. In November 2007 the single Because it is you, which is part of the soundtrack for the film Lissi and the wild emperor , was released.

Mutzke's album Black Forest was released in November 2008 . This time, Mutzke worked with producers Michael Kersting and Oliver Rüger for the English-language album . The first single, Marie , was initially released as a download track and in January 2009 as a single and reached number 24 in the charts. In December 2009, a Christmas version of the song New Day, which had already been released on the album Black Forest , was released .

In September 2010 Mutzke released his fourth album Home Work Soul . In addition to his own compositions, it also contains material by Robert Koch, Oli Rüger and the British R&B singer Lemar , who wrote the accompanying single Let It Happen .

In 2012 a jazz album followed with Durch Einander , which he recorded with a trio around Roberto Di Gioia , bassist Andreas Kurz and Wolfgang Haffner as well as guest musicians such as Klaus Doldinger , Nils Landgren , Götz Alsmann , Thomas D , Cassandra Steen and Sebastian Studnitzky . Sommerregen was released as a single . For this album, which reached number 28 in the longplay charts, he received a platinum jazz award in May 2013 . In April 2013 Sony Music released the album Max Mutzke Live feat. monoPunk .

His next album with some autobiographical songs was released in June 2015 and is entitled MAX . The album's first single, Welt hinter Glas , was released beforehand.