This article deals with the music group "Die Fantastischen Vier". For other meanings, see Fantastic Four . 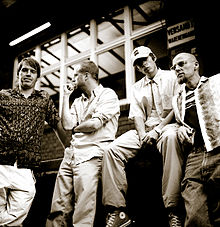 Thomas D, Smudo and And.Ypsilon in an interview with Janin Reinhardt at the IAA 2005 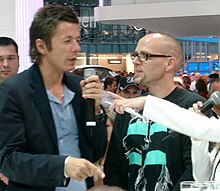 In the mid-1980s, Michael Bernd Schmidt and Andreas Rieke formed the “Terminal Team”; Michael Beck and Thomas Dürr joined in 1989. Under the name Die Fantastischen Vier , the musicians performed for the first time on July 7, 1989 on a self-made stage made of Euro pallets in a former kindergarten in Stuttgart-Wangen . In 1991 her piece Jetzt geht's ab is published on the first German hip-hop sampler Krauts with Attitude . They were the first rap formation to make headlines nationwide with “German spoken song”, as the Fantastischen Vier call their music.

The Advanced Chemistry formation is one of the first groups to implement hip-hop in German; the first chart success in the German rap genre, however, was achieved by the Fantastischen Vier in 1992 with the title Die da!?! , with which they attracted nationwide attention and significantly paved the way for the popularization of the genre. In addition to their joint albums, Smudo, Thomas D, Hausmarke and And.Y were also successful with solo projects and premiered their own weekly TV show The Fourth Dimension in 1993 and 1994 , which was named after their third album.

At Popkomm 1996 they announced the founding of their own label Four Music . The label, based in Berlin, sees itself as a label by artists for artists. They founded this after moving out of their hometown Stuttgart. 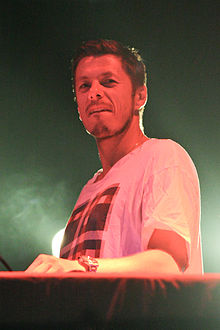 Concert of the Fantastischen Vier on the "Captain Fantastic Tour" on January 15, 2019 in the Lanxess Arena in Cologne

It took three more years until Die Fantastischen Vier released their first album on their label with their fifth studio album 4:99 in April 1999. The album was in the German charts for twelve weeks and reached number one . Four singles were released. After the second place hit MfG - With kind regards , three more singles were released at the same time, each of which could be assigned to one of the three rappers of the Fantastischen Vier : Le Smou (Smudo), Michi Beck in Hell (Michi) and Buenos Dias Messias ( Thomas).

In 2000 Die Fantastischen Vier recorded an MTV unplugged album in the Balver Höhle in Sauerland. At the end of September 2004 Die Fantastischen Vier released the album Viel . The VIEL-Unterwegs tour began at the end of November 2004. In September 2005 the DVD Viel Live was released with a concert recording and tour documentation. In November 2005, the group's first best-of album was released under the title Best of 1990-2005 . The limited edition contained a cassette containing rare, unreleased recordings from their early days when they called themselves “Terminal Team” and rapped in English. The Fantastischen Vier lent their voices to the four penguins in the German dubbing of the animated films Madagascar , Madagascar 2 and Madagascar 3 .

In April 2007, the album Fornika was released , which was preceded by the singles Harvest What We Sown and Simple Be Followed. In May and June the group played a club tour for you under the name Fornika , which took them to London , Paris and Minsk , among others . The Fornika indoor tour for everyone followed in November and December . The video for the third release Ichisichisichisich , published in November 2007, was produced by a fan as part of a video competition. A live DVD of the Fornika für alle tour with a recording of the two Stuttgart concerts was released in April 2008; a week earlier another single was released with Yeah Yeah Yeah .

In 2009, the Fantastischen Vier was the first group to receive the Paul-Lincke-Ring of the city of Goslar for their services in the field of German-speaking spoken singing. On July 25, 2009, the group played a concert called Heimspiel in front of around 60,000 fans on the Cannstatter Wasen in Stuttgart to mark the 20th anniversary of their existence . The band was accompanied by the orchestra of the State Bolshoi Theater from Minsk .

With A Tribute to Die Fantastischen Vier , a tribute album was released for the 20th anniversary of the group, on which various artists cover titles from the Fantastischen Vier . In May 2010 the album For you still Fanta Sie was released. As a pre-release single it appeared blame us (you can keep the rest) . Two months after its release, the album was awarded a gold record for 100,000 units sold. On September 28, 2010 Die Fantastischen Vier gave a live concert worldwide, which was broadcast in addition to the screening location via direct transmission in cinemas and shown in 3D . The concert took place in the Steintor-Varieté in Halle (Saale) and could be seen in around 100 cinemas in Germany, Austria and Switzerland at the same time. In July 2012 Die Fantastischen Vier recorded another MTV unplugged album, again in the Balver Höhle in Sauerland.

In 2014 the band celebrated their 25th anniversary. In October 2014 her ninth studio album was released with the title Record . Another compilation was released in 2015 with Vier und Jetzt .

Smudo and Michi Beck worked as coaches at The Voice of Germany in 2014 and emerged as winners with their candidate Charley Ann Schmutzler . The following year the two won again together with Jamie-Lee Kriewitz .

Beck represented the group in the German offshoot of the Band Aid charity project in a translated version of the song Do They Know It's Christmas? , which was presented on November 21, 2014.

The tenth studio album Captain Fantastic was released on April 27, 2018 . Compared to the previous albums, it contains less timeless, more socially critical texts and is directed against the increasingly prevailing populism worldwide.

After a joint appearance with the band Megalomaniax in the Batschkapp in Frankfurt in December 1993, the metal / hip-hop project Megavier was founded in 1994. At the time, this type of crossover was very popular in the metal and alternative scene. In September 1994 an album was released that sold about 80,000 times. After the publication followed a tour with 20 concerts in Germany, Austria and Switzerland. The project ended in November 1994.